ECS have been touting the new "Desknote" series of computers as a desktop / notebook crossbreed - hence the name. The theory behind this is to bring desktop-type performance to a notebook-size computer, a rather innovative and unique idea!

The difference between a notebook and this desknote cannot be easily detected at a glance, but there a few huge differences between the two:

The lack of battery means that portability is out of the question, unless you buy one of the optional battery packs, or a car adapter. The second differences are the desktop standard components that are used, meaning a wider variety of products and potentially better upgrade options. This unit was supplied with a P4 1.6 CPU, PC2100 256 MB RAM, 15" XGA+ LCD, 20Gig IBM Hard drive and internal DVD-ROM drive.

With using standard CPU and memory types the desknote can be customised to a multitude of performance/price levels - and often for a cost comparable to a similar specification desktop. This particular model, the i-Buddie 4 A928 can handle any socket 478 400Mhz FSB Pentium 4 chip.

Specifications
The hardware built into the laptop is very impressive, and will certainly have more features than some desktop PC's - especially the 15" XGA+ TFT monitor! The onboard graphics chip is not going to be amongst the high end graphics cards - but will most likely play current games at an acceptable speed. It is possible to buy a desknote as a "barebones" system, and add the CPU/Memory/Hard drive yourself - and will most likely be the most popular option.

The included hard drive is still the notebook 2.5" type - slow compared to the desktop equivalents, but they are much better suited for mobility (due to power, size and weight). The hard drive ECS provided was a slower 4200RPM drive, whereas the newer notebook drivers are clocking in at just over 5400RPM - a reasonable performance difference would be gained.

As you can see, the i-Buddie has no shortage of ports! The Firewire and USB 2.0 ports ensure that almost any expansion device will work with the desknote (such as web cams, printers, keyboards etc...) - but the lack of PCMCIA slots is another difference from most laptops. There is no built in WiFi or Bluetooth support, which would have been an excellent choice to build in.​
Included Items
No huge software bundles here, just a plain and simple guide to getting your i-Buddie running - which would most likely come installed with Windows XP and work from power on. The included AC adapter is a standard Lite-On model, so it is going to be high quality and easy replaced if needs be.


15" TFT Screen:​
One of the best features about the i-Buddie is its 15" XGA+ screen, which is a standard size for even a desktop TFT monitor. The picture quality of the screen was very high, and its response time low enough to allow high frame rate games to be played.​ 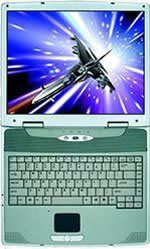 The TFT can handle resolutions all the way up to 1024 x 768, and if a non-native resolution is selected the image is resized and anti-aliased to fit the whole display. With no dead pixels on the screen (on this sample) and excellent brightness, this screen should satisfy all users.​

As the desknote is slightly larger than most notebooks, they have allowed for a very spacious keyboard. All of the buttons were responsive and soft to type on, but they have and annoying tendency to rattle - which doesn't give very quiet typing. There are also 2 "quick access" keys at the top of the keyboard, either side of the power button - these launch the default web browser and e-mail client.​

The keyboard layout is pretty standard compared to that of any other notebook keyboard, except for the location of the function key (seen above as "Fn" in blue") - as this is the usual location of the Ctrl key.​

The speakers are the usual notebook style, with the actual grill at the front of the desknote. Sound clarity and volume was reasonable, but by no means on a par with a desktop solution - it was possible to listen to music or play games with acceptable quality, but would be preferable to use external speakers if DVD's were going to be watched.​
Component Installation:​
Installing the CPU was just as easy as installing a desktop CPU, but with a slightly different method:​ 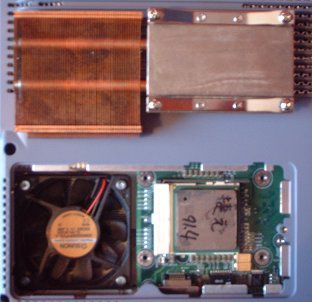 The CPU flap on the base of the desknote unscrews and pulls out revealing the heatsink as seen in the top of the above picture. 4 screws hold this in place over the CPU, and they can simply be unscrewed to reveal the CPU socket and fan.​
The heatsink design is rather unique, and designed to minimise temperatures, yet provide and compact and quiet cooling solution. The heat from the CPU is drawn through 2 copper heatpipes, to some thin copper fins (which cool air is blown over) - this is the same principle applied in high-end CPU coolers, but modified for low profile. The fan itself is thermally controlled, keeping noise at a minimum when the CPU is not under load - this actually works well, and the fan is relatively quiet when running non-intensive applications.​
The memory is fitted in a single DIMM slot, accessible from another flap on the base:​

There is some shielding from external interference and emissions which the desknote gives out in the form of a thin metal strip which fits over the DIMM when in use. The fitting mechanism is exactly the same as a desktop counterpart, so most computer users would not find fitting extra memory a difficult task.​
Performance

The desknote is based on the SiS 650 chipset, featuring a graphics solution similar to that of the SiS 315 graphics chipset - offering GeForce 2 MX performance and fully DX 7.0 compatible. This combination should be able to handle any of today's applications without a hitch, but at what performance hit compared to a similar desktop PC? The desktop used in all these tests was based on a Gigabyte 8EIXP motherboard with a GeForce 2 MX (of similar specification to SiS Graphics chipset).


Synthetic Benchmarks:​
The desknote is benchmarked with the P1.6 Willamette CPU and 256MB PC2100 using Windows XP. These benchmarks compare raw performance characteristics between other combinations of hardware available:​

Compared to the same CPU in the SiSoft reference system, the desknote actually performs a tiny bit faster! This is just a slight variation from the reference result, and can be said to be performing as it should be.​

Again, the desknote performance is above that of the reference system with the same CPU, but again, only by a small amount which can be attributed to the difference hardware used - nevertheless a good sign.​

The memory bandwidth rates are above that of the KT266 chipset with the same PC2100 DDR memory, and are in line with the similar 645DX chipset using PC3200 memory.​

The hard drive supplied with the desknote is severely crippled in this benchmark, performing at the same level as a 2 year old budget desktop drive. Recent desktop counterparts of this drive will be able to transfer data at double the rate, and at almost 60% the average seek time - making a huge impact on database/gaming performance where lots of fast writes are required.​
Gaming Benchmarks:


Although the desknote was not designed to be a portable gaming machine, it is more than capable of playing most recent games at an acceptable level. 3DMark 2001 and Quake 3 benchmarks are shown to give an example of the performance to be expected (compared to a similar GeForce 2 MX based system)​

The i-Buddie 3DMark score of 1222 is almost half that of the 2284 scored by the similar desktop system, showing that there are some large bottlenecks in gaming performance - mainly from the slow hard drive (partly due to the inherent slower graphics chipset).​

In Quake 3, the i-Buddie scores about half that of the desktop again - yet 36.4 FPS is certainly reasonable for playing games on. Again, the hard drive bottleneck is very evident.​
Warcraft 3, Quake III, Jedi Knight II : Outcast and Unreal Tournament were more than playable on the i-Buddie, often on the highest settings. Casual gamers will find gaming performance fine, but serious gamers will want to look elsewhere for now.​

SYSMark 2002 gives a comprehensive system performance measurement using the most common applications used in internet/business to benchmark the system:​

The i-Buddie performs on average about 13% slower than its desktop counterpart - not bad at all considering the hard drive used in the system. These marks were as would be expected from a system with such components, and performs very well in all the tests.​
Conclusion

ECS have certainly implemented this innovative design well, providing an excellent combination of features (both internally and for external expansion). It would have been nice to see an internal 802.11B WiFi or Bluetooth) device, as this would cut down on a-lot of clutter for a very popular feature. The desknote is clearly still evolving, with future revisions being made all the time - perhaps a gaming variant, or a one aimed at the home user that can use it as a portable entertainment system (without having to buy extras).

The ATI Mobility 9000 chipset would be a great partner to a desknote like this, providing some high-end gaming performance. Getting a faster hard drive in the i-Buddie would speed it up by a large margin, and should be the first change made to the system (when cost is not an issue).

With the USB 2.0 and Firewire ports the i-Buddie can cater for most expansions common to both notebook and desktop, but it misses out on PCI/PCMCIA expansion cards. The addition of PCMCIA would be an obvious choice, as there are many useful add-ons available in this factor that will not create the tangle of wires sometimes seen with USB/Firewire devices.

Overall, students, casual home users and business users would all find the size/performance/prices features of the i-Buddie exactly what they are looking for. The main selling feature of the i-Buddie is, of course, the size and integration of the unit - very appealing to a wide variety of people. ECS have succeeded in bringing a desktop/notebook hybrid to the market, without it being just a gimmick.