Heat is the overclockers worst enemy, and case fans are one of the only ways to reduce the effect. With 6 different case fans, your PC may be cool, but it will also sound like a plane taking off. The Digital Doc 5 allows you to make sure your system temperature is as it should be. This is basically a temperature monitor with some very handy features.The unit that encompasses all these features, and fits into a 5 1/4 drive bay, and doubles up as a hard drive cooler (with a single 40mm fan). 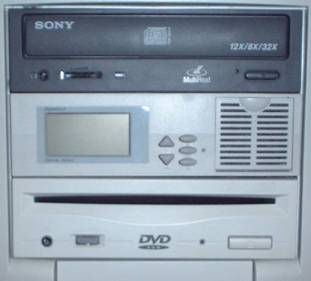 All you need to do is place up to 8 of the provided temperature probes (2 x Flat, 6 x Bulb) around your case in places you would like to monitor for high temperatures (i.e, CPU, Memory, HSF, Hard Drive, and an ambient reading), then, a corresponding fan per probe. You can setup the unit so that a fan is activated at a certain temperature, or so it turns on automatically on startup.

There are a few reasons why this would be useful:

1) The CPU/Ram etc... are overclocked for maximum performance in games, and you have loads of fans to combat the heat generated. But, you want your fans to turn off when not using any CPU intensive programs.

The Digital Doc could turn on some 120mm case fans, only needed when the CPU temperature rises above 35oC.

2) The CPU/Ram are overclocked to the point of meltdown, and you want to make sure that the temperature doesn't go too high

The Digital Doc would scan all temperature probes, and if any were above a set level, a high pitched tone would be emitted, warning you of a problem.

Installing the actual unit itself, is rather like installing a Hard Drive, just mount it on the drive rails (if you have a super-duper case), or just slide it in an empty drive bay, and screw it in place. Installing the probes is a little trickier, and some types have certain uses:

It would have probably been wiser to include more Flat Probes, rather than the Bulb ones, as flat probes can be used in nearly all circumstances. The probes come with about 80cm of cable, so you can clip it neatly to the side of your case and stick it (with the provided tape) to the correct component.

Once you have attached the probes, the corresponding fans need to be installed. An extension cable is provided, so that you can link a 2/3 pin fan up to the panel, but if you want a 4 pin Fan, you'll need to buy a 4 > 3 Pin converter. Fans up to 12Watts can be added, so even the mightiest 120mm fan should be suitable. Remember, only 8 fans and 8 probes can be connected, and they must be attached in the correct order, so that when your Hard Drive gets colder, your Hard Drive cooler fan turns off, not the CPU Fan!

Attaching the Probes to the Digital Doc​
That's not all that needs setting up though - you need to configure the temperatures using the Set Button and the Up and Down keys.

2) Select to measure temperature in oC or oF

4)The 1st temperature channel is now selected, choose a temperature you want the fan on that channel to start at then press Set to move from channel 2 - 8.

5) Once the 8th temperature channel has been set, you must select a Show RPM status (using the same method as above)

6) Once the 8th RPM status channel has been set, you must select a default On/Off status (using the same method as above) 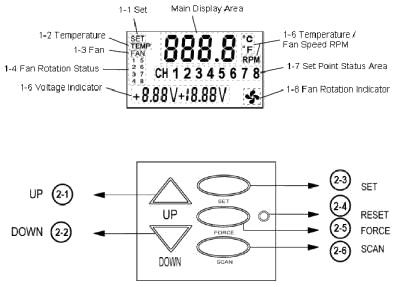 For testing, I hooked up my FOP-32 HSF, 2 x 80mm Fans, 1 x 40mm Fan and 1 x 120mm fan. After installing all the fans, and configuring the device, I proceeded to load the Via Hardware monitor to compare CPU temperature readings....... The reading was rather high! I forgot to set the CPU Heatsink fan to turn on as default!!!! This is not good as you can imagine, so I had to quickly press the “Force” button on the front of the panel (which turns ON/OFF all Fans). This shows the need to be careful when setting this device up!

Once all was re-configured, I reset my PC and it worked fine, thankfully! All the fans were spinning, except my big, loud, jet-engine type 120mm - this is reserved for temperatures over 40oC. With the aid of a hairdryer, I managed to get the ambient case temperature above 40oC, and sure enough the 120mm fan kicked in, swiftly blowing hot air back into my face.

As the Digital Doc comes with a 40mm fan, and a bracket for mounting your Hard Drive, I thought I had better test that too... But alas, the Hard Drive couldn't be screwed in place, the cables were way to close, coming from the PCB header, obstructing the hard drive slot! Technically, a hard drive should be able to be mounted in here!

This is a overclockers toy and would have virtually no use to anyone else, except the heat-conscious server admin or the paranoid user. If you have a case full of fans, but don't want them wasting power, and bursting your eardrums - this is ideal. I have grown used to the fact now, that whenever I start any 3D game I can hear the 120mm fan starting up after 5 minutes, protecting me from an oh-so-annoying crash! This isn't much use as a hard drive cooler, as the cables on the rear of the PCB interfere with mounting.