The Compex Waveport series of wireless networking consists of the WP11 “Wireless Access Point” and the WLU11 “USB LAN Adapter” (both reviewed here), as well as the WL11 PC Card LAN Adapter.


Both of these products are based on the 802.11b wireless networking standard, the most popular standard for wireless LANs. These products are designed for home users, or small office networks - where great transfer speeds are not required. A maximum theoretical throughput of 11Mbps (claimed effective throughput is 7.5Mbps) will not be fast enough for running large applications over a network, but will be enough for tasks such as network gaming, file sharing, internet sharing etc...

The WP11 can handle up to 32 clients, and connects to a standard network via a common CAT 5 cable to a 10/100Mbps connection. It is also powered by an included power adapter, and when powered shows it via a LED. The WLU11 however is a USB powered device, so no need to for adapters there. Large office networks would not find these a very practical compared to current 10/100/1000 Mbps networks: wireless is more expensive, isn’t a great advantage in an office, as cables can easily be laid, speeds will be nowhere near as fast and “theoretically” the radio transmission can be intercepted. 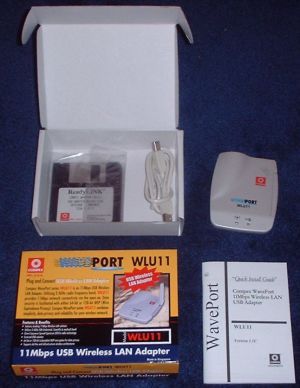 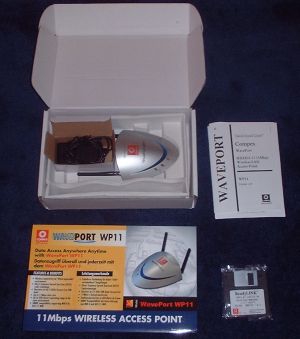 Compex WP11 Contents​
The only included documentation was the "quick install guide" which is very useful if you are a novice - and all goes to plan. Very little in the way of troubleshooting is included (most likely operating system configuration if problems arise), but worldwide technical support numbers are included should the worst happen. If you have set up any network before the documentation will be more than suffice.

Both units are moulded out of a tough, silver colour plastic, and appear well made - there should be no problem with bad socket connections here! The WLU11 is about the size of a floppy disk, as you can see from the photo, with the WP11 being slightly larger. The WLU11 is a perfect size, very thin, with a small fold-down aerial - unobtrusive enough to sit comfortably next to your PC. The WP11 has wall mounts included that allow you to mount the unit with screws and wall-plugs, or alternatively it can be placed on a nearby desk.

These products will both install under Windows 95/98/ME/NT/XP without much hassle... First the WP11 Access Point need to be plugged into your existing network card/hub via a standard CAT 5 cable. Once the WP11 has been hooked up and is powered, you install the AP Manager which will then ask you to scan the network for the WP11

Scanning for the WP11​
If you have a DHCP server, the IP address will be assigned automatically and the installation will continue. If you are on a non-DCHP network, you simply need to enter the units MAC address (located on the back of the unit) and pick an IP address.

Once you get to this stage, plug in the WLU11 into the desired PC with USB support and Windows should automatically detect a new device and copy the drivers from the supplied disk. Again, if you already have a DHCP server you can let assign an IP address automatically, if not, just pick one manually.

all the receivers in range. Up to 40 bit security is available from the WP11, although the WLU11 is capable of up to 128 bit - using the secure mode minimises the chance of any

Once this is complete, you can follow the AP Manager wizard on the WP11 PC to scan for intercepted information being of any use, as well as stopping other unauthorised users on the network.

Our main test will be distance, after all, this will probably be the largest consideration when getting a wireless network! A 25-100 meter range is claimed indoor, and 100-250 outside... With the access point placed upstairs by the computer, I was able to walk all around the house with my laptop and get a good connection, with high throughput rates (idea for wiring up a home!).

When using the Windows XP networking tab in task manager, I was able to get about 42% utilisation (on my 10Mbps EA201 network card) when copying files to the laptop at about 10 meters away (indoor) which equates to about 4.2Mbps throughput over wireless. This certainly isn't a mind blowing figure, but wireless networking currently isn't as fast as cable. With 4.2 Mbps, you can easily share reasonably sized files, share printers/connections - but not run large applications easily from one computer to the other.

Network games such as Return to Castle Wolfenstein and Tribes 2 ran flawlessly, with pings slightly higher than before - certainly suitable for gaming! The WP11 has been attached to my computer for the last 10 days, with the WLU11 being moved around 3 different PC's for testing... and it has functioned correctly all the time.

These network items are some of the best value on the market, and perform extremely well for a home user / small office setup. Some knowledge about computers is needed to install the WP11, but will most likely prove an easy install for most. If in difficulty, Compex provide worldwide support and a 3 year warranty. The WLU11 supports up to 128 bit encryption - which is a practical level, good encryption, but not too complex... the WP11 however only has 64 bit encryption which although enough, 128 bit would be optimum.