Recently there has been a debate about whether modern motherboards are able to produce audio quality that matches dedicated sound cards for gaming and listening to music. This can be largely subjective, as some users report hearing no difference whatsoever, whilst others swear by dedicated audio solutions.

For the purposes of recording and studio production, dedicated sound cards and interfaces are a necessity. This is due to the ultra-low latency on the input section of the cards, allowing users to record and produce multi-track audio without worrying about latency issues. However, for the purposes of gaming and basic sound reproduction such as listening to music and watching films, is there a tangible, perceivable difference between modern motherboard audio and dedicated sound cards?

It’s time to find out!

For this experiment, we obtained an Asus Xonar DGX 5.1 PCI Express sound card with both optical and analogue outputs, and this will be compared to the 5.1 audio output from a MSI P67A-GD53 motherboard, using the Realtek ALC892 codec. The motherboard is powering an Intel i5 2500K processor, with 8GB RAM and an Nvidia GTX 670 Graphics card.

The audio system used to test the two configurations will be a Logitech Z906 5.1 surround system in both 5.1 surround mode and dedicated stereo mode. This is a relatively mid-range speaker system with THX-Certified speakers and a dedicated sub-woofer that has been designed with entertainment, film and gaming systems in mind.

We will also test the configurations using Sennheiser HD205 stereo headphones, in order to determine any differences, and test the Dolby surround capabilities of the Xonar DGX.

The two separate audio solutions also come bundled with various software packages that enhance the sound in various ways. For the purposes of testing we will use both the motherboard audio and Xonar card at stock settings for comparison, then introduce and review the software features of the Xonar afterwards.

So what do you get bundled with the Asus Xonar DGX? The card comes with a full manual, drivers/software package and a low profile bracket for installing into a compact PC. The card uses a PCI Express slot at 1x speed: 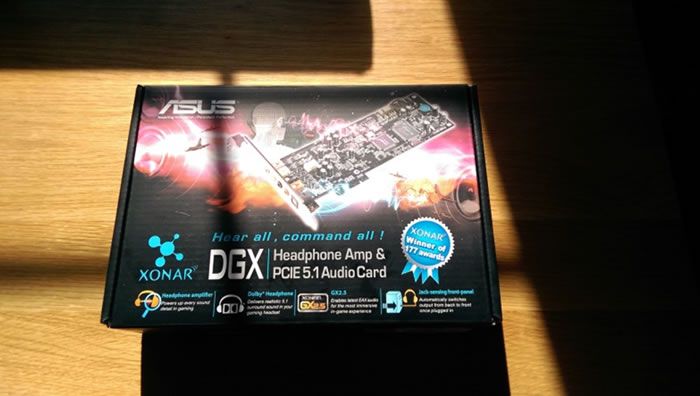 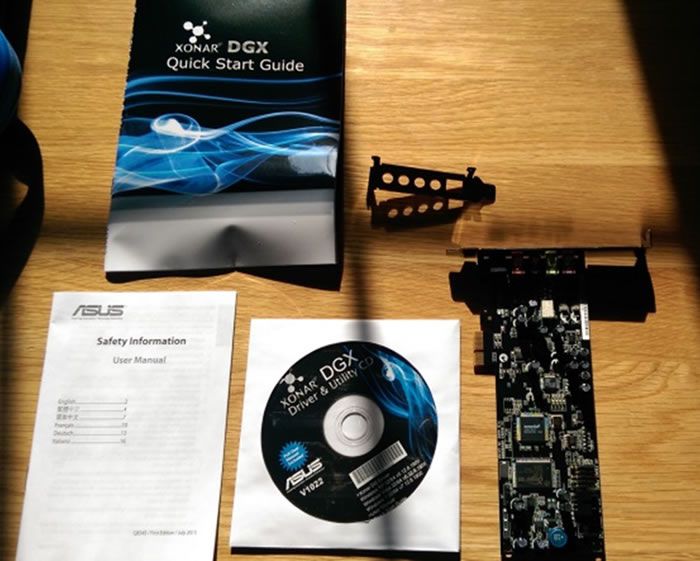 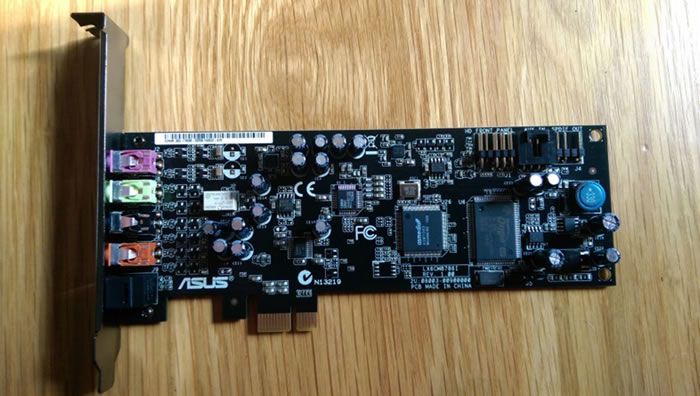 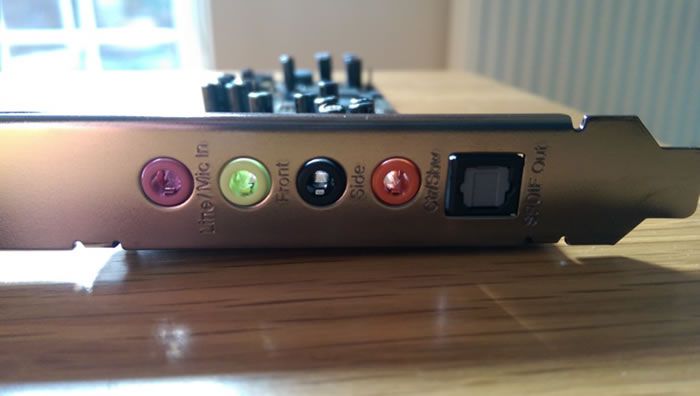 With audio, the higher the signal to noise ratio is, the better. In this case, the Asus Xonar wins hands down (105dB to the Realtek’s 95dB) - but does this translate to a perceivable difference? We shall see!

The Asus Xonar comes packaged with the “Xonar Audio Center” software, which is a compact program that sits in the system tray. It has a variety of options available, including with a graphic EQ and ‘Smart Volume’, which seems to be a rudimentary compressor, increasing the volume of quiet audio and decreasing the volume of louder audio. In practice I found that this severely limited the dynamic range of any audio I was listening to, and it doesn’t have an option to adjust the amount of compression applied.

The program also has options for configuring the speaker setup, and a “Hi-fi” and “GX” mode.

The Hi-fi mode is simply a way of bypassing any effects that are applied through the program. It allows the unprocessed audio to stream through to the speakers, then if the button is turned off, the effects are applied once again. This is useful for comparing different settings within the program.

The GX mode is Asus’ own interpretation of EAX effects for 3D gaming. I also found that it made very little difference in games, and occasionally I suffered crashes in-game when this mode was turned on.

The Dolby surround effects can be turned on when using a pair of stereo headphones, to emulate surround sound.

There are also a whole host of different audio effects that can be applied to the master audio, or recorded voice within the program, but for the purposes of this test they will remain turned off, as I found that they added little to no benefit to the audio quality. 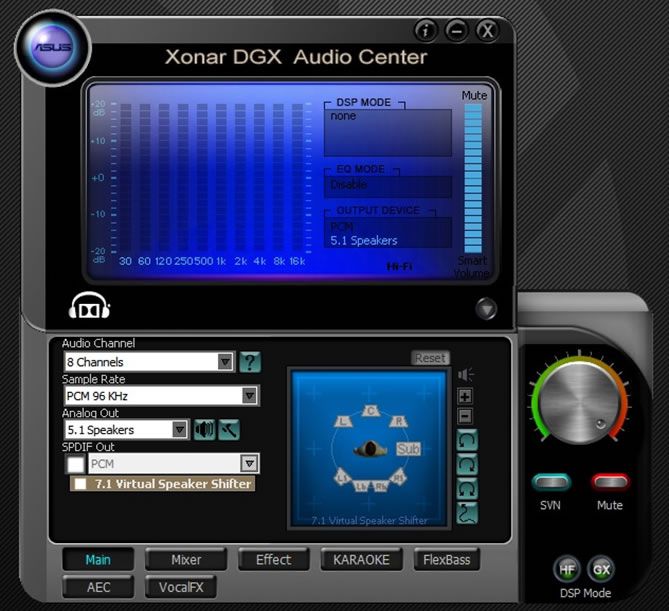 Before we get to the test results, I would like to add a note about the installation of the card.

Below are my experiences with trying to get this card working – it is a fairly long read so if you want a ‘Too long, didn’t read’ of this section, here it is:

It was a complete nightmare and I almost gave up.

I fitted the card to the motherboard, booted the PC into the BIOS and disabled the onboard motherboard audio (which would be re-enabled after installation, in order to carry out the comparison). I then booted into Windows (64-bit Home Premium).).

This is where the fun began. The card was not recognised immediately, but after a couple of restarts it finally did show up in Device Manager as “Unknown audio device”. I then proceeded to install the drivers and software from the supplied disk.

After around 5 minutes of watching the installation bar get to the end, a message popped up asking me to “Please plug-in ASUS Xonar Audio device”. It was seated properly (I checked numerous times). The only options were to cancel or retry, so I clicked ‘retry’. The installation program then re-installed itself and the same thing happened.

Undeterred, I searched on line and found some Unified drivers for the card. These were more promising, as it seems many people on various forums have the same installation woes that I had.

I then read more into the issue and it was apparent that some cards needed a refresh of the EEPROM chip. This was getting ridiculous. Still, worth a try. I created a DOS Boot disk from a USB drive and using a Windows 98 shell, then loaded a program designed to write to the Xonar’s EEPROM onto it. Booted into DOS and ran the program. This configured the chip correctly and I restarted.

I finally got the card working by right-clicking on the Xonar in Device Manager, selecting “Update Driver”, then choosing the driver from the disk. I then had to run the main installation program again in order to install the Xonar Audio Center software.

So – 2 hours later it was finally working. Hooray.

My initial impression with the card was “WOW”. I used both optical and analogue cables to compare the audio from both the motherboard and Xonar by playing a variety of audio sources.

When watching a BluRay of ‘Game of Thrones’, the difference was immediately noticeable. The ALC892 on the motherboard was good, but the Xonar has a much better bass response and the surround sound really came alive. In many scenes there were background noises and effects that simply weren’t produced as well on the motherboard audio. With the Xonar they were clear and immersive. This was especially apparent in a scene at ‘The Wall’, with the sounds of blacksmiths and sword practice in the background being the real “WOW” moment.

Another key difference was the clarity of speech. With the motherboard audio, it was relatively clear, but with the Xonar it was fantastic. There seems to be a much wider sound stage with the Xonar, in that sounds seem to stand out from each other better, and there are no muddy frequencies that occasionally happened with the ALC892 codec.

I then tested the card with some games – notably “Wolfenstein: The New Order”, “Diablo 3” and “Skyrim”. Again, I was shocked at how much better the Xonar was at reproducing the sound. All of the in-game effects were crystal clear, and there were many background noises that I simply couldn’t hear properly using the motherboard audio. The surround sound also came through much clearer, and I found that I didn’t need as much volume with the Xonar.

When listening to music, I chose a selection of Classical, Rock, Metal and Jazz and they also sounded much better with the Xonar (although the speakers I was using are not specifically designed for music, they do a good enough job to compare the two chipsets). Again, the main difference was clarity. I could hear each instrument much better in each mix with the Xonar, and I could also hear parts within the mix that I hadn’t noticed when using the motherboard audio.

The Xonar Audio Centre also boasts a Dolby Headphone application, which emulates surround sound with stereo speakers. My first impression of the headphone functionality with the card was that it was VERY loud compared to the headphone port on the motherboard. This is due to the built-in headphone amp. However, there was very little distortion due to the loudness, and it still sounded fantastic. The Dolby surround effects were good, although software still has a long way to go before it fully emulates 7.1 surround sound.

It has been speculated that using a dedicated sound card could actually net a few more frames per second when gaming, due to the theoretical reduction of the load from the CPU to the sound card. This would only reduce the load by a few cycles, but it’s worth testing anyway!

…I then tested this with the three games mentioned earlier and there was NO difference whatsoever in FPS.

If you want to buy a sound card to get more FPS in games – don’t bother. ‘Tis a silly idea.

Conclusion – is it worth it?

When evaluating sound and audio devices, the results are always going to be subjective to a certain degree. Some might say that you wouldn’t hear a real difference in audio quality unless you were using the most high-end speaker and amp systems available, whereas others might swear that there are perceivable differences when using the cheapest speakers.

For example, take this experiment about using some of the most expensive audio cables available on the market and comparing the sound quality to using wire coat-hangers as speaker cable: http://gizmodo.com/363154/audiophile-deathmatch-monster-cables-vs-a-coat-hanger

The test subjects were blindfolded and the result showed that there was no perceivable difference between the two solutions.

However, I tested the Asus Xonar and the Motherboard audio myself, and used my wife as a test subject to see if she could hear any difference. I didn’t tell her which system I was using and we both agreed that the Xonar beat the motherboard ALC892 in every application. After the initial installation woes, it was surprising just how much difference there actually was between the two solutions.

For the price of the Asus Xonar and the outstanding sound quality it provides, it seems to be a very worthwhile addition to a modern PC.