How much RAM do I really need for gaming

RAM, or ‘Memory’ is simply the amount of ‘room’ a computer system has to function with. Think of a computer system like a small office, with a desk, filing cabinet and a person sitting at the desk. The filing cabinet would be the hard drive, where all the files are stored, the person sitting at the desk would be the CPU, removing and replacing files from the filing cabinet and working on the files on the desk’s surface, which would be the RAM. The more RAM a system has, the larger the desk’s surface would be, and therefore the more room the system has to have multiple files open at the same time.

If a system has a small amount of RAM, then the CPU would have to continually read files from the hard drive, work on them in a small space, and then replace them before opening any more files. Conversely, if there is a large amount of RAM then the system can have many files open at the same time without having to continually access the hard drive.

For this test I thought it would be interesting to find out exactly what the performance implications of using different amounts of RAM would be in various gaming scenarios. I have been wondering if 4GB is enough for games nowadays, as it used to be the ‘sweet spot’ around 3 years ago. However, many systems are now using at least 8GB, due to RAM being one of the lowest cost components in a modern PC. What I want to know is –‘Is 8GB of RAM really necessary for current gaming?’

Rather than using different sticks of RAM for this test, it is more convenient and efficient to simply limit the amount of RAM that Windows is able to use in applications using MSConfig’s system configuration utility. Testing under these conditions also improves the validity of the results, as there will be no discrepancies between the performances of different brands of RAM sticks.

I am using what I consider to be a relatively standard gaming setup for these tests. The specifications of which are listed below:
For the purposes of testing I have installed all of the games onto the Seagate Barracuda Drive, as it has a large amount of space and many people use this configuration (installing main programs and the operating system onto the SSD and games libraries onto larger storage drives).

Have a lootin’ rootin’ good time! This isometric view Action RPG isn’t hugely demanding graphically, but the massive amounts of on-screen particle effects and team-based combat with hordes of insane monsters can occasionally challenge even beastly computers. For this test I will use the highest graphics settings available.

The current godfather of first person RPG’s. Although released in 2011, Skyrim can still demand a huge amount of horsepower to run well on modern PCs, due to the beautiful vistas, huge draw distance and complex on-screen effects. Since its release, Skyrim now has access to thousands of graphical modifications that can quickly eat up graphics cards and processors, however for this test I will run the game using the stock settings, which default to ‘Ultra High’.

The daddy of graphical showcases! This game is one of the most graphically demanding games currently available on the PC, due to the heavy implementation of DirectX 11-based effects and high-resolution textures, along with superb lighting effects and a cutting-edge graphics engine. I will be using “Very High” settings for this test, with DirectX11 effects turned on.

For the tests I will also use two separate resolutions, to analyse performance difference and impact on the RAM usage for each game.

I will use configurations from 1GB up to 8GB of RAM to test each of these games, in various stages. These will be:
The figures in each chart will be the average frame rates (using FRAPS Real-Time Frame Rate Analyser) over a 3 minute stretch of gameplay, with the same part of each game tested each time. I will also test the load times of each game, from clicking ‘continue’ to the moment that the game begins.

So... without further ado, let’s get testing! 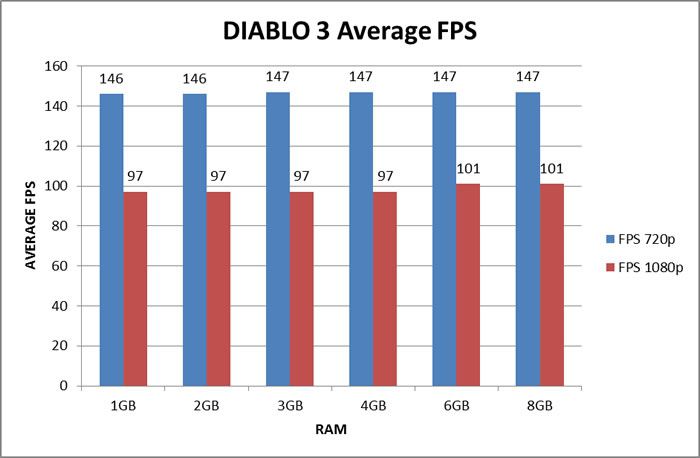 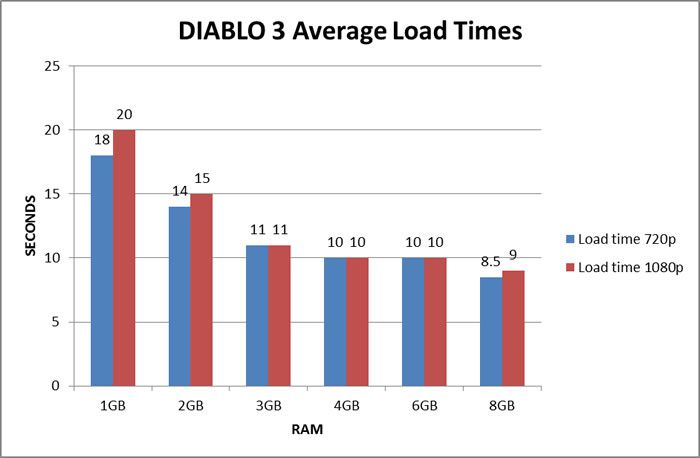 Although Diablo did run with only 1GB, the noise from the hard drive was unbearable. The game was constantly loading textures straight from the hard drive and this made it stutter constantly. The average FPS was good, but the stutter made the game unplayable. It wasn’t until I enabled 3GB that the stutter completely disappeared; however the game was playable at 2GB, with far less hard drive noise. From 3GB and above, there was no discernible difference in gameplay quality, loading times or smoothness.​
Skyrim​ 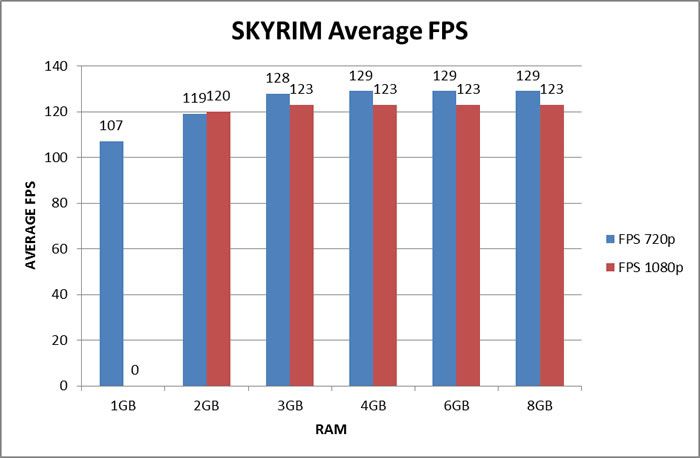 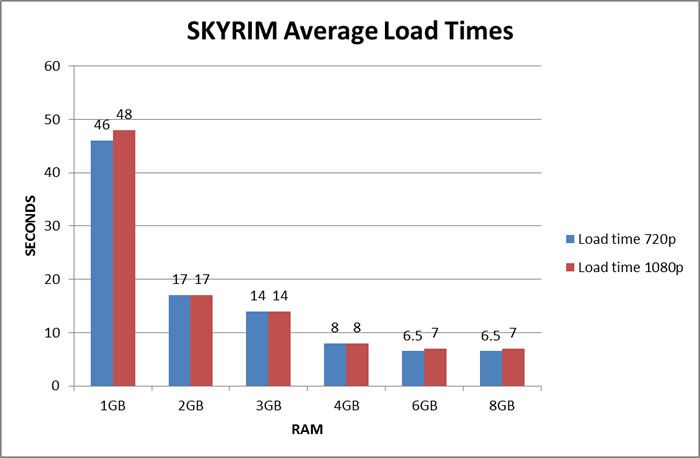 Skyrim would not load at 1080p with only 1GB RAM, in fact it completely hard-locked the PC whilst outputting a high mechanical whine from the hard drive. This was less than ideal. However, it did load at 720p, but again the stutter was completely unbearable due to the hard drive working overtime. From 2GB and up, the game ran flawlessly with very little real-world difference between the different configurations. Interesting!​
Crysis 3​ 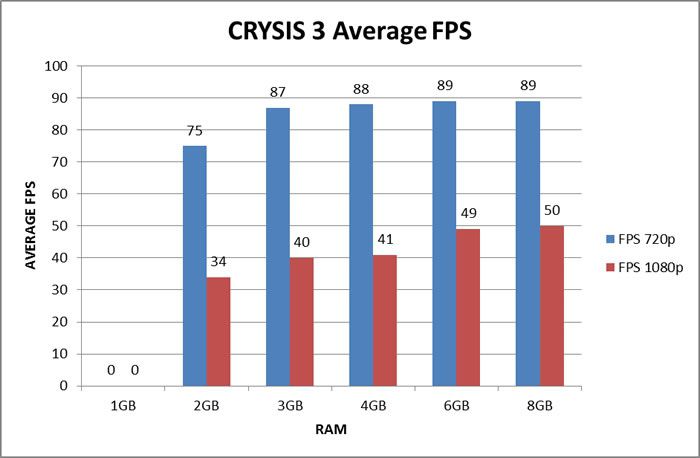 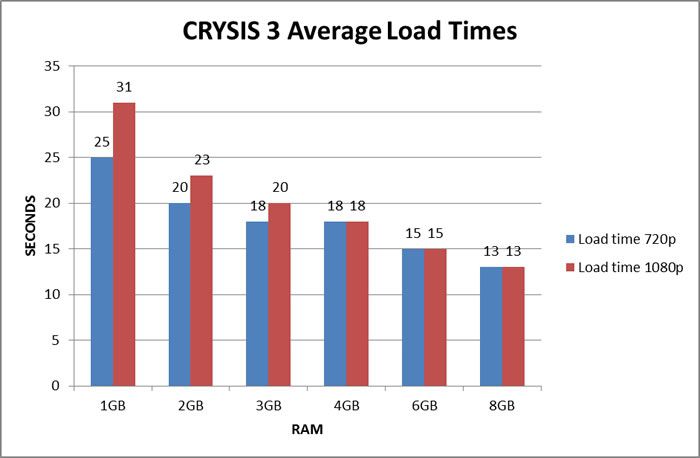 Crysis refused to load at 720p or 1080p with only 1GB RAM, and at 2GB the game struggled with huge amounts of stutter every time a new texture was being loaded into the scene. However, from 3GB and up there was very little difference between the configurations. At 3GB the gameplay was smooth and there was very little hard drive noise.​
Conclusion

The charts above are actually quite deceptive, as they show the average frame rate as being relatively constant. In each game tested I found that although the frame rate was good, the actual playability of the game wasn’t smooth until at least 2GB RAM was enabled. However, this is still a lot less than I thought it would be. Running Skyrim with only 2GB RAM was no different to running it with 8GB, and even Crysis was perfectly smooth at 3GB.

This has some quite interesting implications, as it shows that it still doesn’t seem necessary to have more than 4GB RAM in a gaming system, and the modern games I tested are not as RAM-intensive as I presumed.

So… to answer the question of “Do we really need 8GB yet for gaming?” – I would say no! However, if the system is going to be used for other (RAM intensive) applications such as photo editing or video editing then I would say “Yes! Get as much RAM as possible! It is dirt cheap and having 32GB RAM in a computer makes it seem totally badass!”

If you are building a purely gaming system on a limited budget, however, it seems you really won’t be missing out by only using 4GB RAM. At today’s prices it could be more efficient to put the extra £25 that another 4GB would cost towards a better video card, and simply add more RAM as and when it becomes necessary.

As a side note, I also thought it would be interesting to see if installing a game onto the Solid State Drive would improve the stuttering at 1GB RAM, due to the hugely improved read/write times of SSD drives. I therefore installed Diablo 3 onto the SSD and it markedly improved the in-game stutter to the point where the game was playable. However I highly doubt that anyone would have an SSD with only 1GB RAM as a viable gaming system…