Recently I acquired a new screen for my gaming PC, a Panasonic TX-L65WT600 65-Inch 4K panel to sit in my lounge (I use a wireless keyboard and mouse/gamepad for gaming), replacing an LG 50” Plasma that was 1080p. 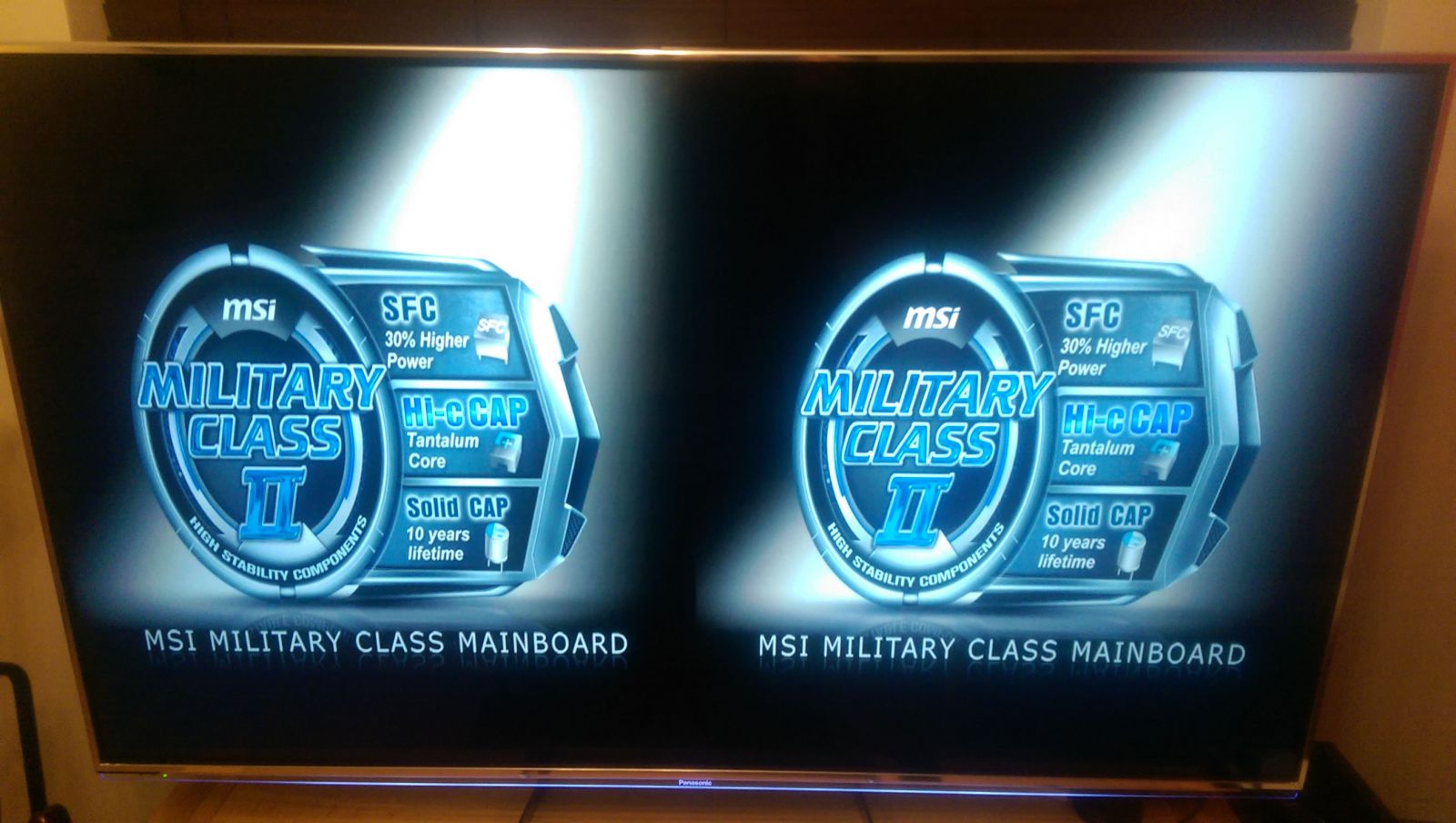 Having heard about the benefits of Ultra-HD, I was excited to try it out from a PC gamer’s point of view, and hopefully some of you might find my initial impressions of the new format interesting!

When booting into Windows 7 for the first time using this screen, my initial impression was “Everything is TINY”. Desktop icons and the taskbar were so small that I could hardly make any of them out, but when I ventured nearer the screen, they were all perfectly displayed and it was difficult to make out individual pixels. 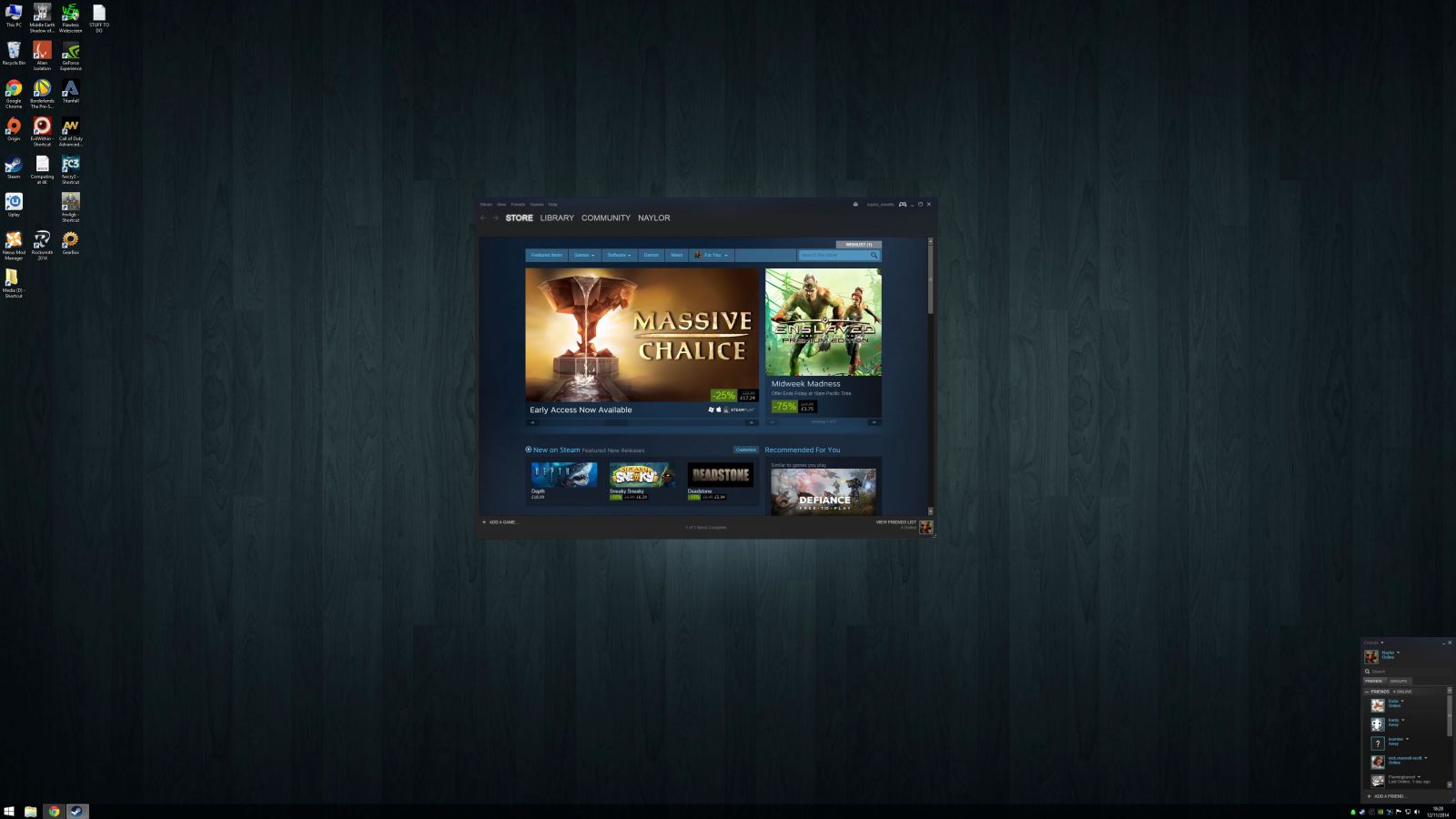 In order to make everything viewable from a distance I set the desktop resolution to 1920x1080 (using an HDMI cable). In theory this should work as 4K is 4 times the resolution of 1080p (meaning 4 pixels at 4k = 1 pixel at 1080p). This did work nicely, however in order to get above 30FPS in games a DisplayPort cable is required, as HDMI 1.4 doesn’t have the bandwidth required for 60FPS/60HZ.

I therefore plugged in the DisplayPort cable and tried to do the same thing with the desktop resolution, but to no avail. It appears that supported resolutions with DisplayPort differ greatly than with HDMI (setting custom desktop resolutions with the Display Port cable ended up crashing the Nvidia drivers), so I had to leave it at 4K native resolution, but increase the scaling of text and icons within Windows to 200%. This is due to the way that DisplayPort sees the monitor. It essentially splits the display into two halves vertically, and then stitches them together to create one display (the BIOS screen and windows welcome screen is split vertically into two identical screens until the desktop is displayed).

The main problem with using DisplayPort is that when gaming in 4K it works flawlessly, but if the game is too demanding for 4K and you want to play in 1080p or 1440p, you simply can’t. The resolutions aren’t supported. There are a bunch of resolutions available below 4k, but most appear in strange ratios and are seemingly unusable. This could be a problem with Nvidia’s drivers, the panel itself or DisplayPort, However, after searching for solutions I simply couldn’t find one. There are scaling options in the Nvidia control panel to stretch the display manually to fit the screen, but these were disabled when using Displayport. 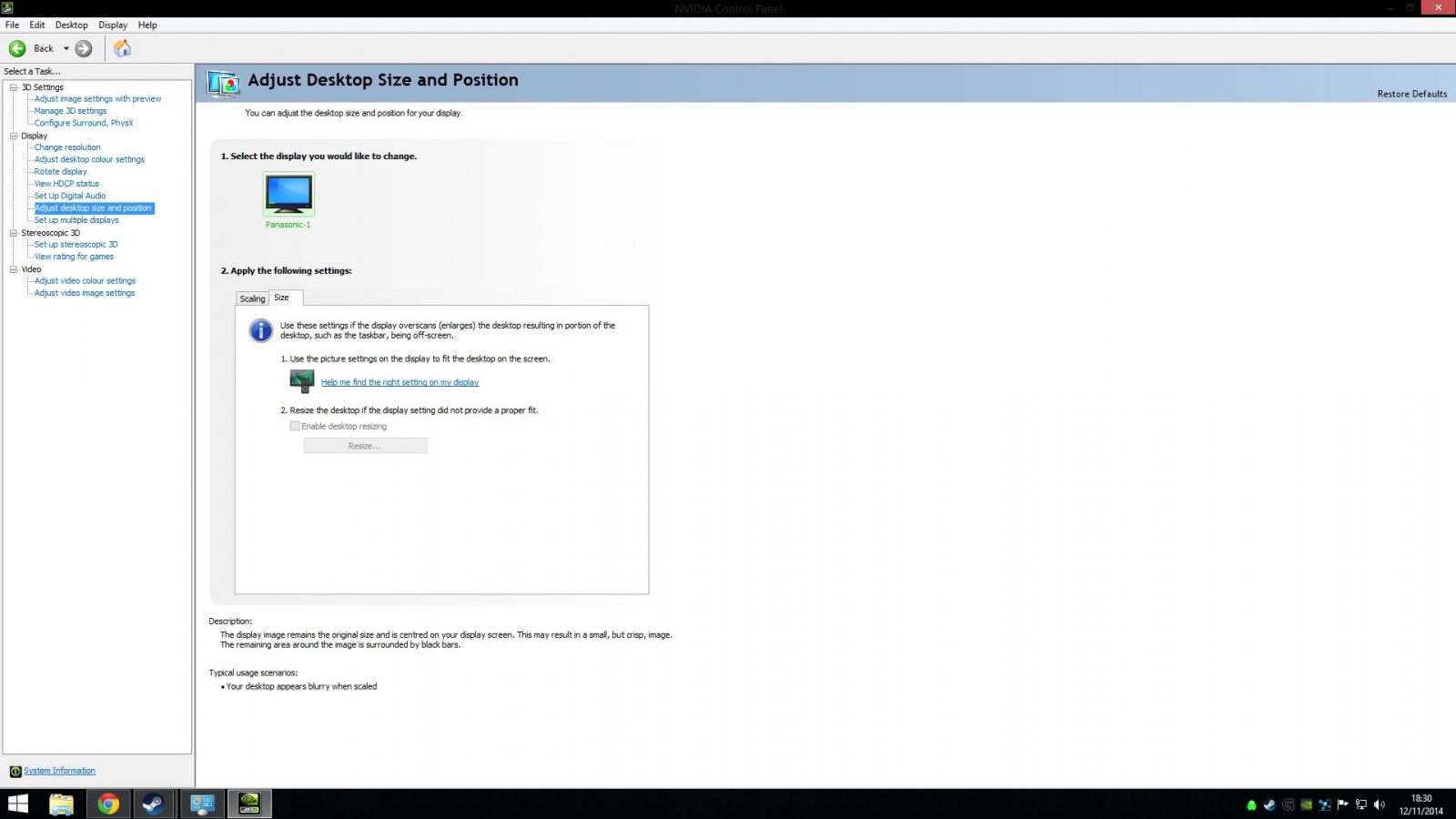 It became apparent that the newly introduced HDMI 2.0 standard would be the best solution, and waiting for updates from Microsoft (in the form of Windows 10 or other software updates) should hopefully combat scaling problems.

Putting the teething issues aside, I loaded up Crysis 3 to put my GTX 780Ti through its paces. Setting the resolution to 4K (3840 x 2160) and all other options except Anti-Aliasing to “Very High”, I was greeted with the most breathtaking gaming visuals I have ever seen. Textures were crisp to the point of being photo-realistic and the game just looked amazing. At 25 Frames Per Second. Hmmm.

It became quickly obvious that one of the fastest single-chip graphics cards in the world was simply not good enough to run games with this standard of visual fidelity, as it has to push 4 times as many pixels as 1080p.

I did find, however, that Anti Aliasing was not particularly necessary at this resolution due to the sheer density of the pixels, which was a bonus.

Running other (less graphically demanding) games was a joy. Diablo 3 and Borderlands 2 looked amazing at 4K (easily running 60 frames per second), and I found no issues with the HUD on screen, as it seemed to scale well with the resolution, keeping its original size relative to the game. Far Cry 3 and The Witcher 2 also looked outstanding, but averaged 30-40 FPS each.

I found that the increase in resolution also increased the Video Ram usage of the graphics card, and the 3GB on board the 780Ti was quickly filled up with Far Cry 3’s textures. It seems that future cards may have to be shipped with more VRAM in order to cope with graphically intensive games running at 4K and avoid stuttering whilst textures are loaded in and out of the GPU’s memory.

When watching BluRay content at 1080p, the screen held up very nicely. The resolution was maintained well, and looked exactly like it did on the 50” TV. Game of Thrones and Life of Pi were still very crisp and I didn’t notice any loss of quality by the screen up-scaling 1080p content.

Unfortunately there really are no 4K output formats apart from games to enjoy on this screen at the moment – Youtube’s 4K streams are woefully compressed to the point that they seem only slightly better than 1080p and Netflix will only stream 4K to devices such as consoles and specific, built in, TV apps (4K streaming for PC’s is on its way according to Netflix support but if you’re looking forward to watching House of Cards or Breaking Bad in 4K on your PC, you’ll have to wait for now).

There is also no industry standard agreed-upon format for 4K media yet, so streaming and playing directly from hard drives is the only option at the moment.

I have scratched my ultra-high resolution video itch by watching downloaded clips of nature films with ‘epic’ music dubbed over the top, although each 1 minute clip is about 400MB in size. One downloadable 4K film is over 360GB!
If you want to watch anything in uncompressed Ultra-HD, unfortunately for now you’ll have to settle for watching a one-minute long video of a bee buzzing around a flower, set to ‘Sail’ by AWOL Nation.

When using the display I sit around 7 feet from it on the couch. At this distance I found that switching between 1080p and 4K did have a very notable difference in the amount of clarity, but I needed to get closer (about 3-4 feet) to really see how different it was. At this distance, in 1080p I could easily make out individual pixels and the image had a very ‘granular’ appearance to it, with a noticeable screen-door effect. In 4K however, I didn’t notice any pixilation whatsoever. The games looked just as clear from 3 feet away as they did from 8 feet away. In fact, it was difficult to make out individual pixels even with my face almost pressed against the screen. Due to this, I have found that in order to truly experience the clarity of 4K resolution, you’ll need to sit close to the monitor. In fact, too close for comfort in a lounge setup.

After using the display for a few weeks I have finally settled on using a resolution of 2560 x 1440 for most games over HDMI 1.4. With this resolution I can enjoy 60FPS over HDMI and it adds a nice amount of fidelity to games over 1080p, without impacting too much on performance using the single 780Ti. This is until I invest in a GTX 980 (or 2) with HDMI 2.0 capabilities.

One final note is that with the new consoles out, developers seem to be upping the usage of VRam for PC ports, with recent games such as Bethesda’s “The Evil Within” and WB’s “Shadow of Mordor” recommending 6GB for ultra textures, even at 1080p. When switching to 4k, this will inevitably demand more VRam use, and therefore it may be worth waiting for cards with 6-8GB VRam before 4K becomes a truly viable gaming resolution.