Counterpoint Research announced yesterday that Apple is the most profitable mobile phone handset brand, and in the fourth quarter of 2017 they captured a whopping 86% of global handset profits. This news delighted many Apple fans, who viewed it as affirmation that the brand was justifiably strong. If you live in the USA or UK then you are probably used to Apple phones being very popular, but the reported figures relate to the global position, and the reality may be different to what you expect.


What was reported about Apple’s profits?
Counterpoint Research has reported the following points, looking at global profits arising from mobile phone handset sales in the fourth quarter of 2017 (Q4 2017): 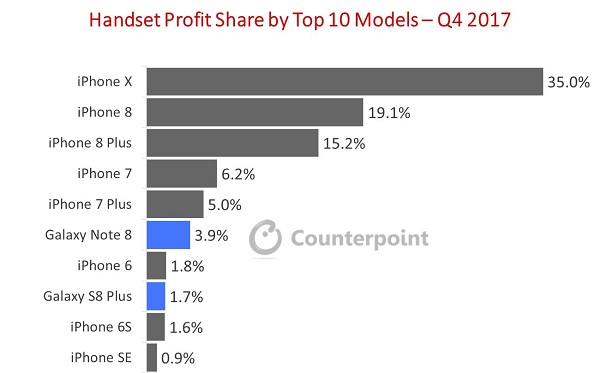 Source: Counterpoint Research​
It is interesting to note that some of the older iPhone models still generate a higher profit share than new Android models. For example, the Samsung Galaxy Note 8 (released August 2017) earned 3.9% of the global profit share, whereas the iPhone 7 (released September 2016) earned 6.2%.

However, there is more to this picture than meets the eye.


Number of handsets sold globally
So, we have established that Apple has earned a massive share of the global handset profits. However, one glaring omission from the data is the number of units sold. You would think that if they have made a massive profit, then it must be because they have sold the most handsets, right? Wrong. Not by a long way. 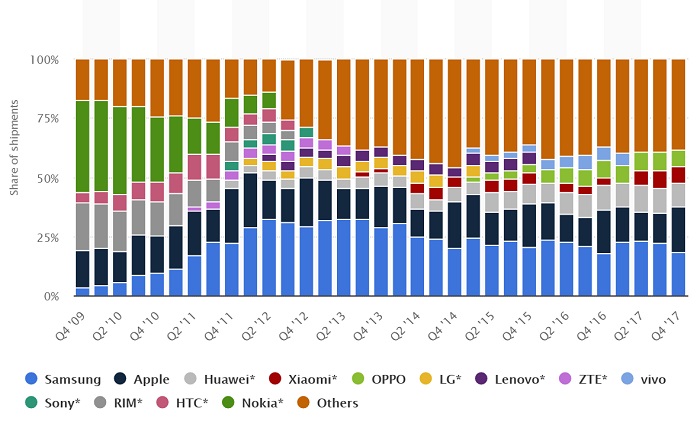 Source: Statista​
The last column shows the number of smartphones shipped per vendor in Q4 2017 (Apple is dark blue). The figures show that Apple sold 19.2% of the units sold in Q4 2017, Samsung sold 18.4%, and Huawei sold 10.2%. These sales relate to the last quarter of 2017 only, and the supporting description for the data states that Samsung was actually the biggest handset vendor in 2017, having sold 317.3 million units. Apple was the second biggest vendor (they sold 215.8 million units). That’s a difference of over 100 million smartphones sold last year.


Profits per handset
If you’ve followed so far; thank you. A lot of numbers have been thrown around, and you might find yourself thinking “but what does it all mean?”. Essentially it boils down to this; Apple netted 86% of all the profits generated from smartphone sales in Q4 2017, yet they only sold 19.2% of the total number of handsets. That 86% relates to less than one fifth of total sales.

Therefore it follows that Apple is making a lot more money per handset sold than its competitors. Why? Either their costs are lower than other smartphone vendors, or they are charging their customers a lot for what they are getting. It’s as simple as that.