Microsoft are going to be rolling out improvements to Windows 10 systems over the coming weeks (starting today) with the "Windows 10 Anniversary Update"... think of it as a service pack!

If you're using Windows 10 already, you'll likely notice some big changes/improvements when it hits - including a new style start menu. There is more information on what can be expected on the Windows Insider blog:

Xbox Play Anywhere will be great! Being able to buy Forza Horizon 3 etc on the XB1 but also being able to play it on the PC is great for me.

The 'Details' button tells me nothing! 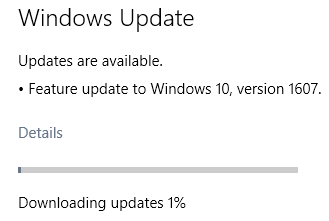 So after what seemed like a long time and several reboots later last night, I have the update. All went smoothly nothings vanished or been deleted, though like when I upgraded from 8 to 10 it duplicated my Pictures, Videos and Music folders - assuming this is because I've got them pointing to a dedicated 2TB drive and the new ones are the default user profile locations. No biggie, just delete them!

Thoughts below, am at work so this is all from memory.

First, for a change, lets do the bad things:
- Upon reboot and completing the upgrade Windows had strangely changed my TV (connected via HDMI) to the default audio device - no issue, just had to switch it back, but I did think for a second it had broke the already fragile Creative drivers! haha.
- Not a fan of the new action centre icon in the taskbar by the clock, it looks too big and ugly. and its now on the right of the clock so it looks out of place.
- Dark theme is a good idea, but it doesn't look quite right, kind of like an after thought.

Now the good stuff:
- The design tweaks to the Settings are very nice, makes it look a lot 'nicer'
- The Start menu is improved, though I will still use Start10.
- The sticky notes: Though I've not used them properly I can see them honestly being quite handy as I have a sieve for a brain when it comes to remembering things I need to. That said, will it will replace Google Keep as my note taking go to? I doubt it tbh.
- The action centre windows itself looks nicer than before.
- I saw the new settings for updates, but not played with them yet.


Thats it for now, Will test more later on tonight.

It's still not available for me yet for some reason, I've done a forced check and rebooted a few times, but no dice. I may need to be patient

Glad you're liking it so far though! I'm just pleased that we're seeing continued improvements throughout the life-cycle, much more so than service packs.

Yeah the other halfs laptop didn't have it either.

Yeah it seems good so far, though I've not had a real chance to test it yet.

Can I assume that it will simply appear one day?

Can I arrange that it happens at a time of my choosing?

Yes the roll out is staggered.

It will DL in the background, but you can choose when you want to initiate the install. Be aware it will take a while depending on your system and it will reboot several times. I did it while we were doing dinner.

Following on from my post #4 something I've noticed is....

Folder names within explorer (not on the desktop, randomly) are aligned to the left now. I do not like this. It looks crap.

Bug or not it needs putting back the way it was.

Still no sign of this on the GF's laptop.

You could try downloading the update manually if you want to get it out of the way? I did that on my Surface tablet:

Nah I'll wait, Just wanted it done so its out of the way. TBH I want to do a fresh install on my old SSD for her, just never got round to it... This might spark the motivation I need!

Ian said:
You could try downloading the update manually if you want to get it out of the way

That's what I have done and it seems fine.

V_R said:
Folder names within explorer are aligned to the left now.

Bug or not it needs putting back the way it was.

V_R said:
- Not a fan of the new action centre icon in the taskbar by the clock, it looks too big and ugly. and its now on the right of the clock so it looks out of place.
Click to expand...

Agree again. Did I read somewhere that it can be put back left of the clock? Or changed?

I paid for and use Start 10 within Windows 10 and yesterday they e-mailed me informing me of an upgrade that integrated with the MS Anniversary update. Start 10 did not make it clear whether their patch would cost money or not but I installed it anyway and it seems it's a free update.

After that I thought I may as well install the anniversary service pack so this morning I did.

Tbh I can't see much difference at all apart from a couple of things.

Prior to the update I could disable automatic updates thus: Control Panel >> Administrative tools >> Services >> Windows Update >> Click Stop Button and set startup type to disabled. And to allow updates it was a simple matter of reversing that process.

But now I get as far as 'Services' and 'Windows Update' simply isn't listed. Looks like Microsoft sussed what people were doing and nipped that one in the bud. So, does anybody know how I can disable automatic updates in a similar fashion?

The second change I noticed was I seem to have gained an extra hard disk. If you look at the attached screen grab you'll noticed a 'D' disk around 550Mb. That wasn't there prior to the anniversary update. I suspect it's a partition that Microsoft create on drive C for their OS to contain the mbr or other information pertinent to the installation.

Opening the drive shows no info at all but I think it would be unwise to delete it. Anybody any ideas?

I just leave the updates to do their thing, I have my PC set to not restart, it just tells me it needs to.

As for the hard drive, I'd be taking a look at the Disk Management within Computer Management at the drive