Below I have posted a few pics of the various parts I've put aside for a project I started several months ago but shelved due to confusion on my part.

I have all these parts in a carry case stored under my bed atm, I think I have everything I need with the possible exception of a screen or small monitor if I can't access this setup via a computer using Windows 10. I can access the eventual Raspberry Pi Zero setup using either hard wired Ethernet or from my wireless router.

My intention was to use this setup to play digital audio through my stereo hi fi setup, either with an analogue signal or a digital signal via a digital to analogue converter. As I don't consider FLAC or mp3 audio true hi fi then I'd be happy to settle for analogue out.

At the moment all audio (around 1.6Tb) is stored on one 2Tb SATA HDD but if this setup worked out I'd buy another identical 2Tb HDD and pair them in an external RAID enclosure for backup. Such an enclosure costs less than £80 and I'm currently using one with my main computer with a pair of 4Tb (configured in a RAID 1) HDD's, almost full with video and audio files atm. Which is one reason I'd like to shift the audio elsewhere, it would free up some space on the twin 4Tb enclosure.

When I first bought the Pi Zero I've had it running 2 separate Linux OS's using my wireless Logitech keyboard and mouse, USB loudspeakers and a full size monitor. I no longer have a spare monitor though so I will need some way to view the contents of the Pi Zero setup to choose music to play back.

I was thinking one of those small touch screen monitor screens designed for the Raspberry Pi but not sure.

My confusion stems mostly from not understanding how to physically connect the audio board to the main board. To me, it looks as though it has to be soldered using one of the multi pin connectors - is that correct?

Also wondering best OS to use for a simple audio server.

Here's what I have accumulated in the case: 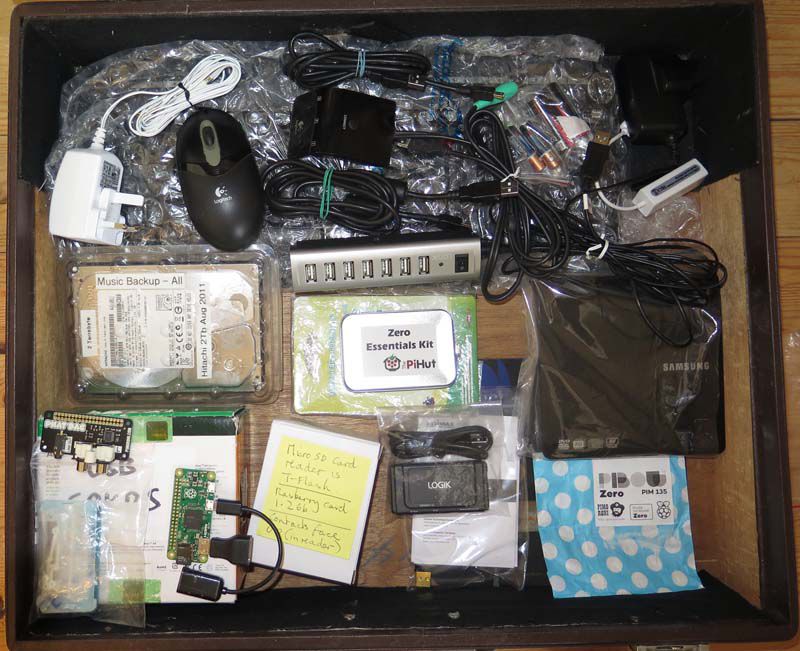 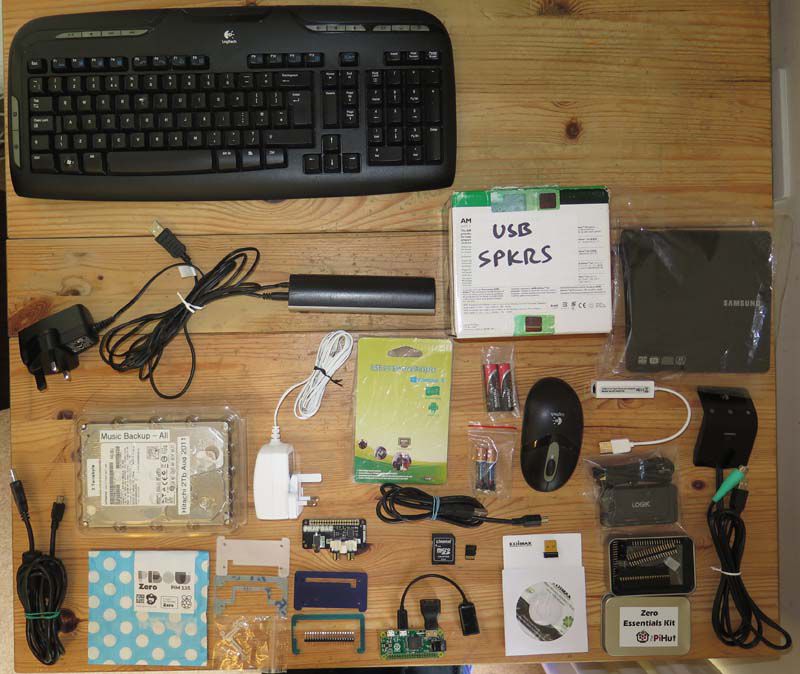 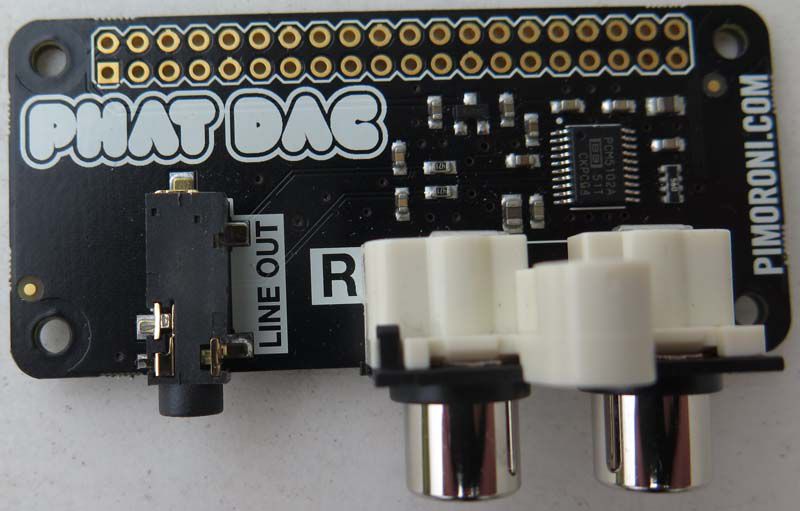 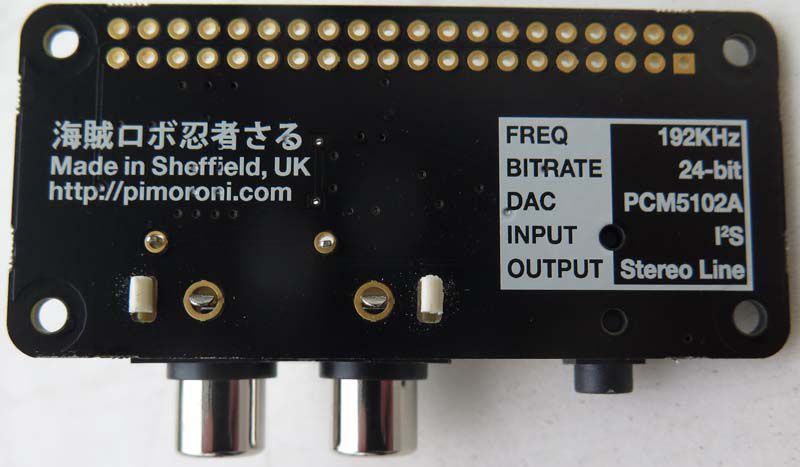 I've been having a look around and here's a few links. From looking it does appear that I need to solder the PHAT DAC to the Zero and it also seems I didn't need the phono (RCA) socket adapter.

How to set up a PHAT DAC

This is probably the case I have: PiBow case

I think I'm going to have to set up the Pi Zero using the monitor from my bedroom computer and see whether I can access it from my Win 10 Machine. Somehow I doubt it, I figure I will need a small monitor local to the Pi Zero. And I have an Apple phone so I doubt I can access it with that.

Let's have a look at which small monitors are available.

Well if it is this board you need to do some soldering.

Kit includes: Assembled pHAT DAC & 2x20 0.1" female GPIO header, some light soldering is required to attach the header on, or you can of course solder the pHAT right onto the Pi Zero
Click to expand...

There is a handy pin chart of the board here at page 7,

Once you have the thing set up you could use a standard Raspian os,

or you could use this which looks neat,

by nickthefish » Mon Feb 08, 2016 1:08 am
I am using the Pi Musicbox image provided here: http://www.pimusicbox.com/ which runs via Mopidy

The setup instructions that amend /boot/config.txt below may help:

The PHat DAC works with dtoverlay=hifiberry-dac
Click to expand...

Here is a better pin out diagram with some code to run to make it work ,

An this may be of use,

If you like music you are going to love this!

But for easy setup on a Pi Zero, don't follow the tutorial above, but use the one-liner that is briefly mentioned in the forum:
curl -sS get.pimoroni.com/phatdac | bash

Good with SuperCollider
Andrea_Schiller Just make sure to add:

As to putting the phat on the pi,


Hi Nick, did you get one of these in the packet?

You solder that on so the black part is under the DAC and then it'll push right on to the pins on the pi. If you didn't get one I'd suggest using the contact us for on the shop site ( https://shop.pimoroni.com/pages/contact-us10 ) to contact Pimoroni and I would expect they'll sort you out.
Click to expand...

There is a lite version of Raspbian that you can use if you are running headless which is pretty easy to do but you would need to use the terminal,

The pimusicbox looks very interesting as it seems you can use a phone to control the music. Pimusic box uses Mopidy which you can use with Raspbian or other os's but it may be easier to use pimusicbox.

Have fun and post a step by step guide so that the rest of us don't have to struggle and sweat if we want to have a go at a similar project.

floppybootstomp said:
And I have an Apple phone so I doubt I can access it with that.
Click to expand...

Pi MusicBox
Make your Raspberry Pi stream!
Welcome to the Swiss Army Knife of streaming music using the Raspberry Pi. With Pi MusicBox, you can create a cheap (Sonos-like) standalone streaming music player for Spotify, Google Music, SoundCloud, Webradio, Podcasts and other music from the cloud. Or from your own collection from a device in your network. It won't drain the battery of your phone when playing. The music won't stop if you play a game on your phone.

Connect a 25$ Raspberry Pi to your (DIY) audio system, easily configure MusicBox and go! Control the music from your couch using a phone, tablet, laptop or PC, no tinkering required. AirPlay and DLNA streaming also included!

Thanks for the reply, there's a lot to digest there.

I've quite a busy weekend but I should be able to spend Monday having a tinker, I'll report back how I get on.

Let me talk of failure, frustration and disillusion.

Over the past several days I hooked up my Raspberry Pi Zero to my bedroom monitor and attempted to make me's an audio server. I failed. I discovered that the various OS's required for running the Zero are not user friendly.

I didn't fit the PHAT DAC audio board, I thought it prudent to get things as I wanted them before I made all those solder joints.

Amongst all the frustrations I encountered on various OS's were:

Even whilst my patience stood me in good stead nothing I entered in the console seemed to work and in the end I just had to walk away and resist the temptation to smash the Zero to even tinier pieces with a large club hammer.

Searching online for obscure commands and forever seeming to run into blind alleys is not my idea of fun.

So, sorry folks, call me a loser, accuse me of lacking tenacity, point a finger at me and say 'You're stupid you are' but all I want is an easy life. I was prepared to encounter a few difficulties and knew a lot would have to be done at console level but my experience trying to do this seemed hopeless and absolutely ridiculous.

And the Raspberry Pi and all associated components? My mate bought the lot off of me - bar the 2Tb HDD & external optical drive - for £55.00.

A sorry tale, perhaps, but no more Raspberry's in this boy's life

Well at least you gave Pi making a go mate. Looks like you have found a solution to your music needs an as long as you can listen that is all that matters.
Surprised that you had so many problems though.

Shame it didn't work out, I can empathise with how frustrating getting used to console commands can be! I've not tackled something on this scale for the RPi before, but I imagine the learning curve is pretty steep

I wonder if a RPi 3 would have been a better match for it, as that comes with integrated wireless and an Ethernet port, which at least makes that first part easier. Not much use now, but perhaps if your mate runs in to problems it would be worth trying on that - all the hardware would work with one.
Ad

@floppybootstomp would this be any good for you ? You would have to use a bluetooth audio receiver with your stereo, there is one mentioned in the comments section.