Just seen this on Reddit. Anyone who uses AVG should think about ditching it in my opinion......

"
In there new privacy policy they state in the section "What do you collect that cannot identify me?"

"We collect non-personal data to make money from our free offerings so we can keep them free, including: Advertising ID associated with your devices Browsing and search history, including meta data; Internet service provider or mobile network you use to connect to our products; and Information regarding other applications you may have on your device and how they are used. Sometimes browsing history or search history contains terms that might identify you. If we become aware that part of your browsing history might identify you, we will treat that portion of your history as personal data, and will anonymize this information. We may also aggregate and/or anonymize personal data we collect about you. For instance, although we would consider your precise location to be personal data if stored separately, if we combined the locations of our users into a data set that could only tell us how many users were located in a particular country, we would not consider this aggregated information to be personally identifiable."

They later state in "Do you share my data?"

further down the article under "What rights do I have over my data?"

"You have the right to opt out of the use or collection of certain data, including personal data and non-personal data, by following the instructions here. http://www.avg.com/gb-en/privacy-preferences"

That link just takes you to instructions on how opt out of the new letter newsletter.

This wrong on so many levels


EDIT: It seams from further reading that this isn't new but i only found it because of there new one page page privacy policy. I think this new layout made it possible to see the correlation without a law degree hence why i found it.
"

Eek, not good! Unethical and an abuse of trust. Not good, AVG

You get nothing in life for free these days & AVG are not doing anything that other companies do not do.
A loyality card is just a way for a supermarket say to target you with offers & they all sell your details on!!

And here is a warning from El Reg,

http://forums.theregister.co.uk/forum/1/2015/10/14/avg_anon_data_brokering_analysis/
They also warn that Avast is also thinking about doing the same thing

Nothing for free these days? I haven't paid for AV or AM software for at least ten years now, probably longer and I haven't had a virus in that time. The last virus I suffered from came to me whilst I was using Nortons (yes, there was a time when Nortons was quite good and not just bloatware).

I tried Bitdefender after several folk here gushed on about it but ditched it after it deleted files without asking my permission which rendered a couple of apps I had installed broken and unusable. Now that's what I call intrusive.

AVG is bang out of order but Google, Facebook and Windows 10 all practice similar ethics AFAIK.

So what do I use? Wait for it..,.. Microsoft Security Essentials. Hey, stop laughing, I know some people here think it's useless, maybe it is, but I haven't suffered any nasties since I been using it and to the best of my knowledge it doesn't do any harm.

I also use Malware Bytes and that add-on thingie of theirs for browsers that Mucks recently recommended. Again, don't know if they're doing any good but it doesn't hurt to have them installed and use them AFAIK.

And I also regularly use Privazer to give a good clean, an app I believe Bootneck recommended (probably not using it now in Linux Mint though

). It does seem to me that Privazer does do a good job without being intrusive.

MSE for several years which either works well or I've been very lucky - I'll never know which.

Also used CCleaner for years too. I recently got another cleaner from GiveAwayOfTheDay called Wisecare which seems to find, and remove, a lot more than CCleaner. It doesn't remove Privacy Items unless you upgrade to the paid version of WisecarePro but I find that CCleaner removes all these items so I use both.

Yes can recommend Privazer clears a lot of rubbish out of windows if anyone is interested there is a similar product for Linux Distro's called Bleach Bit but you do have to be a little careful with that one as you could delete something you did not intend to delete.
Ad

Well I'll be blowed, no sooner do I mention MSE than it actually does something... 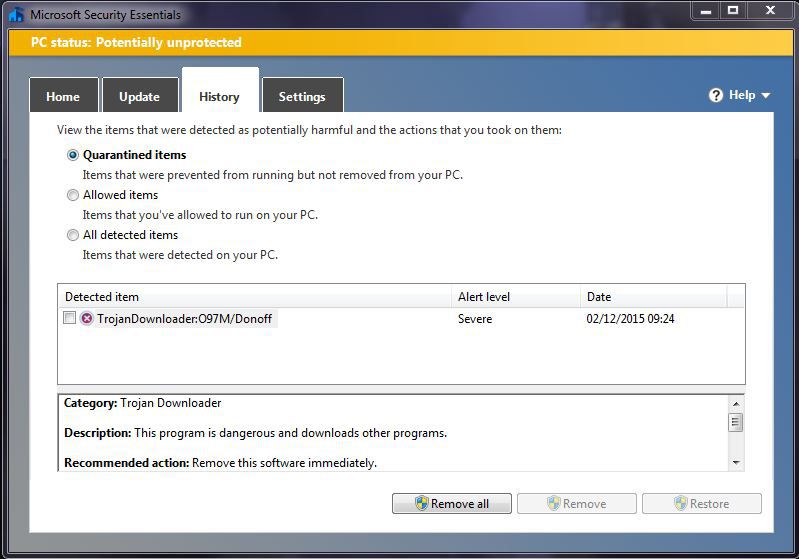 This was a spam attachment.
You must log in or register to reply here.