The NVIDIA Shield was one of the first 4K Android TV boxes to hit the market, and today we are taking a look at the 16GB version. The Shield can be used to watch TV, films, play console games, and crucially can also be used to stream games from your PC to your TV. It features a Tegra X1 processor with a 256-core GPU and 3GB memory, which should provide for high performance when it comes to both gameplay and watching video.

NVIDIA advertise the Shield as being “the best android TV box” – so let’s see if it lives up to the high expectations.

In the box we have the Android TV device itself, two Shield controllers (which was a bonus offer – it usually only comes with one), an AC adapter, HDMI cable, and a USB cable. The Shield has a pleasing angular design, and has a high quality look and feel. Check out the full specifications for full details of the hardware inside and the ports on the device.

Set up is a painless affair, and once you have got all the cables connected you are ready to go. Once you turn the box on you will need to sign in using a Google account, but you do not need to sign in each time you use the Shield.

The NVIDIA Shield features a Tegra X1 processor, making it one of, if not the, fastest Android TV boxes on the market. Here at PC Review we have previously tested out other TV box devices (low-end Android TV boxes, Chromecast, Roku, Intel NUC running Plex) and we can confirm that the Shield vastly outperforms them in terms of speed and responsiveness. Furthermore we have very rarely experienced any connectivity issues, which happened frequently with a custom built Intel NUC running Plex.

The controllers are a little weighty and square, and don’t feel as comfortable in the hand as, say, a PlayStation 4 controller. They have the usual features you expect to see – D-pad, A/B/X/Y buttons (same as an Xbox controller), dual analogue joysticks, bumper & trigger buttons – and in addition there are also touch-sensitive buttons in the middle, which includes the NVIDIA power / multifunction button. On the top of the controller there is a micro-USB port for charging, and a built in 3.5mm stereo headphone jack and microphone. 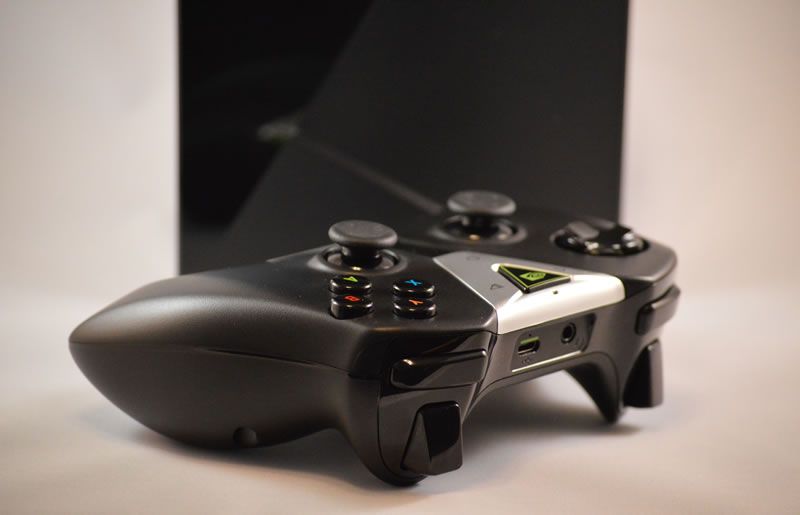 Shield Controller​
Given our Shield box came with two controllers, we haven’t needed to buy any additional units, but they are available for upwards of £39 (at the time of review). You can also purchase a separate remote for the Shield (for around £40+) but it is worth bearing in mind that other programmable remotes are also compatible. Finally, you can also get a stand for the Shield box if you want it stood up instead of lying horizontally.

As mentioned previously, the Shield is compatible with certain programmable remotes, and we tested it out with our Logitech Harmony – no problems to report there. If you don’t want to purchase a Shield remote and don’t already have a programmable remote, then you can also control the Shield with the Android TV Remote app, which also allows you to perform voice searches.

In terms of compatibility with other devices, the only issue we encountered was when using our Bluetooth keyboard (for browsing). For some reason, the Shield interpreted our keyboard signals as being from a US layout. This meant that when we tried to type certain symbols, such as @, the result was a different symbol. The only solution was to look up when the symbol was on an American keyboard and then type it in using the relevant key. Not a major issue, but frustrating. There doesn't appear to be a way to change keyboard locale settings.

The user interface has a linear navigation system which is very easy to use. Here’s an overview of the menu screen:

The voice recognition is excellent, and allows you to search for whatever you are looking for quickly and easily. It is very responsive, and surprisingly clever – you don’t need to put on your best telephone voice; you just speak normally. For example, if you say “Watch Guardians of the Galaxy”, then you will be presented with the option of either watching it through Netflix (providing you have set up your account), or to purchase the film from the Google Play Store. If you choose Netflix, then the film started playing straight away without taking you through any menu options on Netflix first, which is great. The overall experience of using the voice commands is very slick, but unfortunately it cannot be used in all apps. Where voice cannot be used, you do have the option of manually inputting a search term using the on-screen keyboard, but this is slow and clunky in comparison. If you have a Bluetooth keyboard, here is a good time to use it. 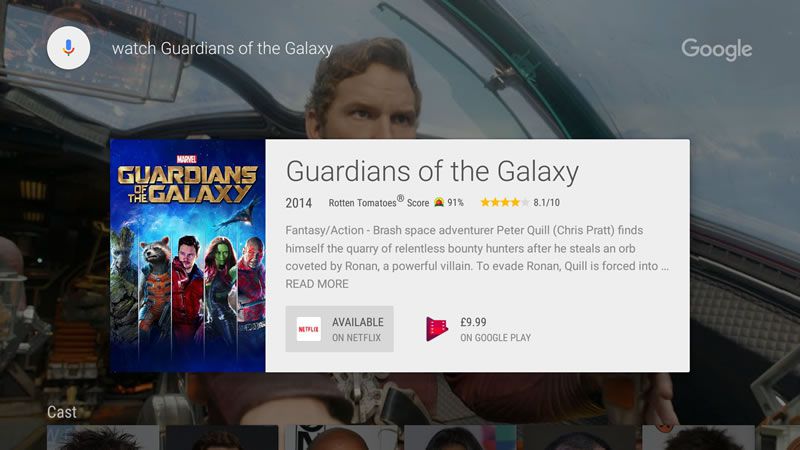 Using the voice search : "Watch Guardians of the Galaxy"​
A nice feature of the Shield is that it already has Chromecast built in, so you can easily send media from your phone / tablet.

Straight out of the box, the Shield is pre-loaded with the following apps: Plex Media Server, Netflix, YouTube, Google Play Store, Google Play Music, Google Play Movies & TV, VUDU, and Photos & Videos. There are a number of other apps available to download through the Play Store, including the ever-popular Kodi, although weirdly there isn’t a Chrome app. If you want to download a browser such as Chrome, then you can do this through the browser in the ES File Explorer app and then access it via Sideload Launcher.

There are so many media streaming devices on the market at the moment, but few are able to handle almost any media provider like the NVIDIA Shield can (Netflix, iPlayer, DLNA Media, Plex). The only notable (and surprising absence) is that Amazon Prime video does not have an Android TV app – however there are many ways to work around this, such as “sideloading” the app or casting directly to the box. 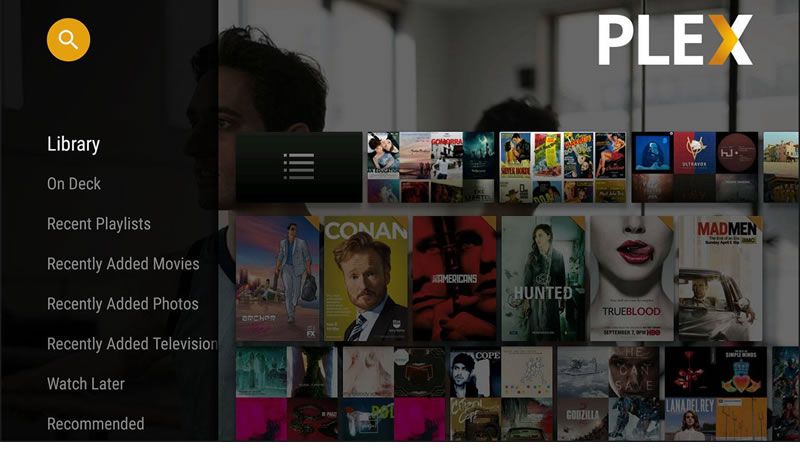 Plex on the NVIDIA Shield​
The highlight of the media steaming capabilities has to be the tight integration with Plex. It can act as both a Plex server and client, including transcoding – so you can store media on the Shield (or external storage) and steam to other devices if you’d like. The Plex implementation is one of the best we’ve seen, with smooth menu navigation and flawless video playback. Several months ago there did appear to be a bug with very mild video stuttering with certain file formats – but this was rectified in a more recent software update. Having used many Plex clients over the past year, this is the best we’ve used so far.

The best thing about the NVIDIA Shield is the ability to stream games directly from your PC. This is really easy to set up and use, but you need to make sure you meet the minimum requirements – being a GTX 600 series graphics card or higher. All you need to do is download GeForce Experience on your PC, set up an account, and log in to the Game Stream app on the Shield. You will be prompted to input your PC lockscreen password if you have one, but then you are taken to the Game Stream interface showing a list of all your available games. Some games can only be played on the Shield using a keyboard and mouse (for example, DOTA 2) but most have full controller support.

Our test rig PC has a GTX 960 graphics card, and we played Titanfall and Orcs Must Die 2 – both played exceptionally well. So well in fact that we are now considering whether to set up a purpose built gaming rig to really make the most of the Shield… but I digress. The gameplay was incredibly smooth; you would think you were gaming directly on a PC or console. A lot of people tend to have their PC somewhere other than their living room, so being able to play games from your PC from the comfort of your sofa is great. Plus you also benefit from hardware improvements and game mods – neither of which are things you can do with a console. 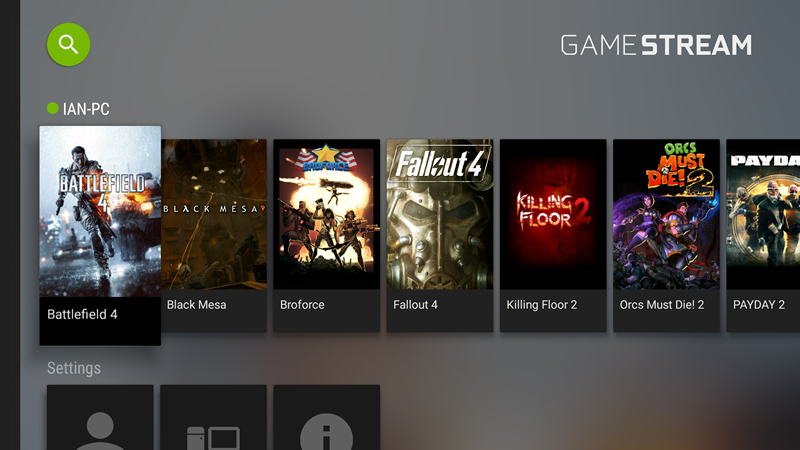 Game Stream Launcher
​
Some compatible games, such as Battlefield 4 and Fallout 4 required a little more interaction to start the game. Once you have launched the game via GameStream, you'll need to use the mouse (or right control stick) to proceed to proceed through any windows based pre-game menus as you would do if you were sat at the PC. It's an unavoidable problem, but it does break the otherwise seamless launch.

You can also play games through NVIDIA GeForce Now, which is NVIDIAs subscription service to stream games from the cloud. At the time of writing, this is free for the first three months and £7.49 per month once the free trial is over. For the monthly subscription you have free access to a limited number of games, but still have to pay for newer releases, although some purchases also give you a digital key for your PC. Amongst the included games are Tomb Raider (2013), Borderlands, the first three games of the Batman: Arkham series, The Witcher 2, Orcs Must Die, and many more. Assuming you have sufficient bandwidth, the games will stream at 1080p and 60fps. This uses the same technology as local game streaming, but utilises cloud computing clusters to power the game. You'll need an internet connection of at least 10Mbps for reasonable quality streaming, but ideally 50Mbps for 1080p @ 60fps.

The Shield Games are mostly similar to what you would expect to play on a touch screen tablet or phone. There are some good ones and some bad ones, but unfortunately in the store most games seem to have a four-and-a-half star rating out of five. This makes it difficult to judge which games are actually good without a little online research first. Games are a little on the expensive side compared to most Android apps – for example, Half Life 2 is £8.99, Borderlands 2 is £13.49, Resident Evil 5 is £8.49. Our favourite out of the free games available was The Walking Dead, which is well worth a play. Let’s face it though – you’re not going to buy a Shield so that you can play Shield Games on it; you’re going to stream games, and the other ‘console’ games are just a bonus. 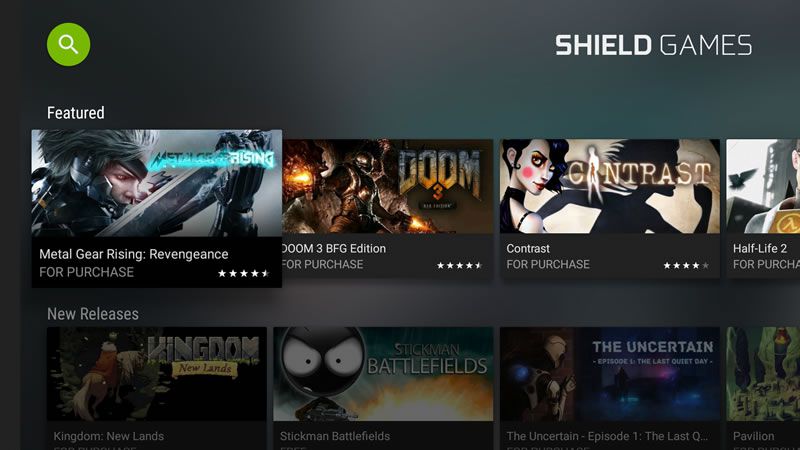 The NVIDIA Shield is ahead of the competition in terms of processing power and performance, but this is reflected in the price. When compared to an Intel NUC, as a media streaming PC, the Shield wins hands down. We did notice some stuttering during playback on the Shield, but this was fixed with a firmware update.

Now for the biggest downside with the Shield; the price. Although NVIDIA advertises the 16GB Shield for £149.99 on their site, this only comes with one controller and they are currently out of stock. Elsewhere on the net you are looking at least £170, or a whopping £229 from Amazon (although this does come with two controllers). This puts the Shield firmly in the expensive end of the Android TV box spectrum, and that’s just for the 16GB version. For that price, though, you do get excellent performance, high quality output, and the ability to stream games from your PC – so it depends how much that is worth to you.

Another gripe with the Shield is that you can’t use the voice search feature within Netflix, which is really annoying. You can of course use the on-screen keyboard, but if you have one it is far easier to use a Bluetooth keyboard.

Overall the NVIDIA Shield is a great, if expensive, bit of kit. It is likely to appeal most to gamers wanting to stream at high-quality from their PC into their living room, closely followed by users wanting to stream content from their media server. If you fall into neither category, then there are more appropriate (and more reasonably priced) Android TV boxes out there.