It has been 50 years since Intel was founded by Gordon Moore and Robert Noyce in California. Since 1968, the landscape of consumer electronics has changed dramatically, so it’s even more impressive that Intel has not only managed to weather the constantly evolving environment, but have established themselves as a market leader.

On their 50th birthday, we're taking a look back at their big achievements and what the future could have in store.


The start of something big
Intel got its name from ‘integrated electronics’, and is not short for ‘intelligence’ as many assume. The company’s founders, Gordon Moore and Robert Noyce, had previously worked at Fairchild Semiconductor (the company behind the world’s first silicon integrated circuit) but were unhappy with the management of the company decided to set up their own. Within just two years, Intel went from being an ambitious start-up to a public company, and is now currently the second biggest chipmaker in the world (although for many years Intel did indeed hold the top spot, but were overtaken by Samsung earlier this year). 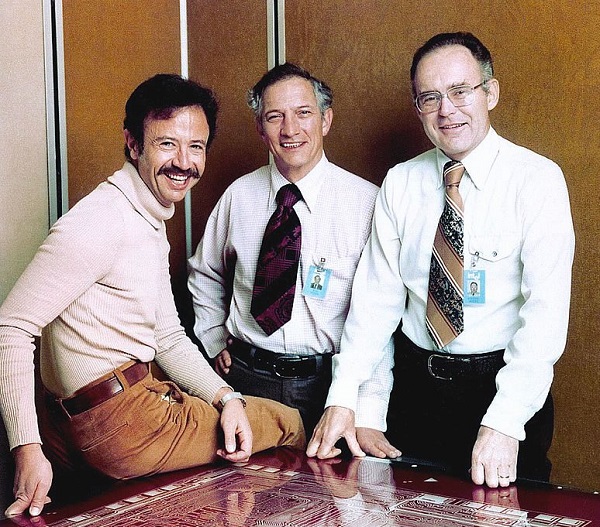 Andy Grove, Robert Noyce, and Gordon Moore in 1978
Photo: Intel Corporation​
Gordon Moore was a chemist but is most famous for the observation known as Moore’s Law, which states that “the number of transistors on a chip doubles roughly every two years”. This observation proved to be true for decades, although the pace has slowed more recently. 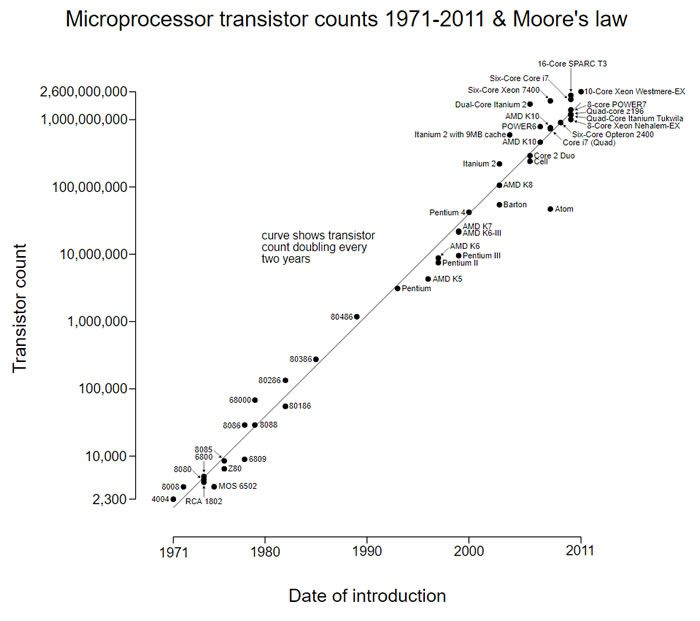 From memory to microprocessors
Intel’s first product was the 3101 Schottky TTL bipolar 64-bit static random-access memory (SRAM), which was quickly followed by the 3301 Schottky bipolar 1024-bit read-only memory (ROM). However, the turning point for Intel came in 1971 when they developed the world’s first commercially available microprocessor, the Intel 4004. The thumbnail-sized 4-bit chip featured new silicon-gate technology, which was far faster than the aluminium alternative. Despite its small size it provided the same computing power as the first electronic computer (ENIAC, built in 1946), which filled an entire room. 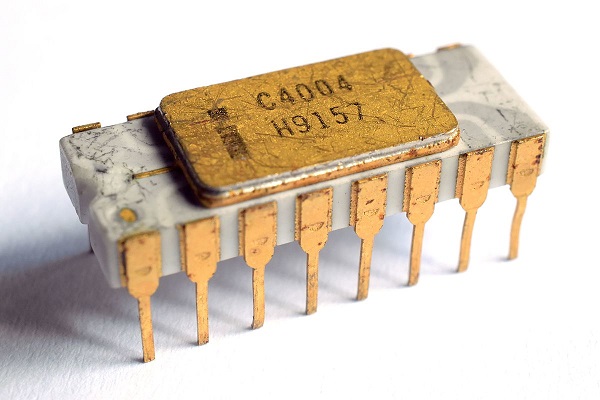 The Intel 4004 microprocessor (Photo: Thomas Nguyen / CC BY-SA 4.0)​
Through the development of microprocessors, the whole landscape of computing changed. Computing power on a small scale, combined with mass production bringing down costs, meant that the technology became far more accessible for everyone; not just businesses, but for consumers at home too. The 1980s saw the advent of personal computers, and Intel began to focus in earnest on microprocessors. Intel launched their popular Pentium processor range in the early 1990s, and the general public became more aware of Intel as a company as a result of their ‘Intel Inside’ campaign (I bet the jingle just ran through your head when you read that – da-da-da-dum). Nowadays, the majority of microprocessors found in personal computers are based on Intel’s x86 architecture.


What does the future have in store?
Intel have certainly achieved a lot since 1968, so what can we expect to see over the next 50 years? Intel is investing in quantum computing, driverless vehicle technology, artificial intelligence, and 5G networks to name but a few.

However, whilst Intel once dominated the microprocessor market, they now face stiff competition from the likes of Samsung and AMD. Competition is great for consumers though; it encourages innovation and drives down product costs, so this is certainly not a bad thing.

One thing is for sure; don’t expect Intel to disappear any time soon.