With more and more people using their computers for long periods of time, it has become necessary for companies designing input devices to approach the issue of repetitive strain injury (RSI). A4 Tech has recently designed a wireless keyboard and mouse with many features intended to help prevent the onset of RSI. The keyboard features a number of pre-set multimedia keys for use with applications such as Microsoft Office, Windows Media Player and Internet Explorer. The optical mouse also has a number of attributes, including a new-design scroll wheel and various programmable buttons. The set uses RF wireless technology with ranges up to 2 metres and no angle restriction. There are 255 ID’s, which allow a number of units to operate in close proximity to each other without causing interference. 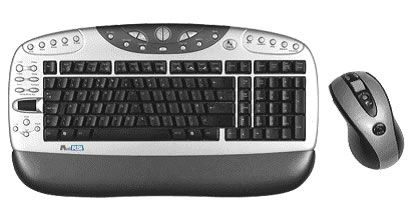 Both the keyboard and mouse are silver with dark grey features, and are pleasing to the eye. The mouse is nicely weighted, which makes for easier control and has a robust feel. The keyboard feels solid and quite heavy, which again gives it a real feel of sturdiness. The keys of the keyboard respond to a very light touch, and are relatively quiet whilst typing.

A-Shape Key Layout: This is a great feature, that means your hands can sit on the keyboard more comfortably during use. Rather than having to bend your hands at the wrists in order to type, the angle of the keys is in line with the natural angle of your forearms.
A new feature of this kit is a separate charger for the batteries, which doubles as the receiver. This is a very useful addition, as it means when your mouse batteries run out you can change them for some ready-charged ones immediately. This charger/receiver plugs into the USB port for power and data transmission.

The A4 Tech keyboard and mouse set was nicely presented and was very easy to install. The overall first impression you get is positive, and it certainly looks nice when set up.

However, a problem was initially encountered with the mouse: From time to time it stopped responding whilst being used - for no apparent reason - which was very annoying and inconvenient. This problem seemed to go away of it’s own accord after a few weeks, but the possibility of it coming back is as yet unknown. A further issue is that from time to time the pointer starts to move slowly across the screen without any physical input (which can occur with some optical mice).

A fundamental yet easily rectifiable problem is the fact that the keyboard misses lights. This poses an annoying hindrance when, for example, typing a caps lock-sensitive password. It is understandable that the manufacturer may wish to avoid drains on the battery life, but keyboard lights are considered to be an essential feature of any keyboard, making their absence all the more noticeable. However, it is worth noting that the keyboard seems to use very little power, allowing regular AA batteries to last over a month under heavy use.

The addition of a battery charger being built into the receiver was a particularly welcome one, especially seeing as the mouse batteries only seemed to last for a few days under heavy use. The procedure of changing over the batteries was very straightforward, as they can be swapped with the one which had been charging in the receiver. There was a definite drop in mouse performance when the batteries were running low on power, but this was compensated by the ease and speed at which the batteries could be changed.

One of the main anti-RSI features of the keyboard is the layout of the keys. Rather than the usual formation, the angle of the keys is designed to match the way in which your hands are meant to rest on them. At first, this felt quite different, but only took a few hours to adjust to. This feature allows your hands to lie in line with your wrists more comfortably – bending your wrists at an angle in order to type can cause eventual wrist problems, and this feature really does help alleviate the problem. The addition of short-cut keys also aims to reduce stress on the mouse hand wrist: RSI more commonly affects the mouse hand, and so the introduction of these buttons allows the user to avoid unnecessary mouse usage. The following pictures show close-ups of the short-cut keys:

As you can see, there are a wide variety of tasks that can be performed by the short-cut keys, and depending on how you use your computer will determine which keys you may find more useful. Those who use Microsoft Office on a regular basis are likely to find them the most useful, as they are geared towards that type of use.

The only drawback found with the layout of keys and addition of new keys is that the position of certain other keys is different (for example, Delete, Home, End and Insert). Again, this is easy to get used to after a little time, and worth it for the overall comfort gained by the new layout.

The ergonomics of the mouse have been well thought out, but some may still find that for better avoidance of RSI to the wrist a gel cushion under the wrist is still required. The buttons are well placed on the mouse for right-handed use, and overall it is very pleasant to use. Furthermore, the new design mouse wheel feels far more comfortable underneath the finger than previous styles.

Overall, the A4 Tech Anti-RSI keyboard and mouse set was a pleasure to use, but with certain problems. However, these problems are merely small annoyances rather than fundamental issues. It is extremely comfortable to use due to it’s thoughtful design, but should not be considered to be a fully preventative measure against RSI of the wrists, hands and arms. At just under £30, this is a bargain, despite the small drawbacks.