Seagate has taken the wraps off its whopping 60TB solid-state drive for the enterprise.

Seagate has been showing off its monster 60TB solid-state drive (SSD) this week, which breezes past the 15TB SSD that Samsung launched in March.

But don't expect to see Seagate's SSD in a consumer device any time soon, with the new drive set to join the high-performance end of its datacenter portfolio.

Samsung's PM1633a has a 2.5-inch form factor and holds 15.36TB of data. For now, it remains the largest commercially available SSD and reportedly costs $10,000 per unit.

Seagate's 60TB Serial Attached SCSI (SAS) SSD on the other hand opts for the familiar HDD 3.5-inch form factor. The company says that its drive has "twice the density and four times the capacity" of Samsung's PM1633a, and is capable of holding up to 400 million photos or 12,000 movies.
Click to expand... 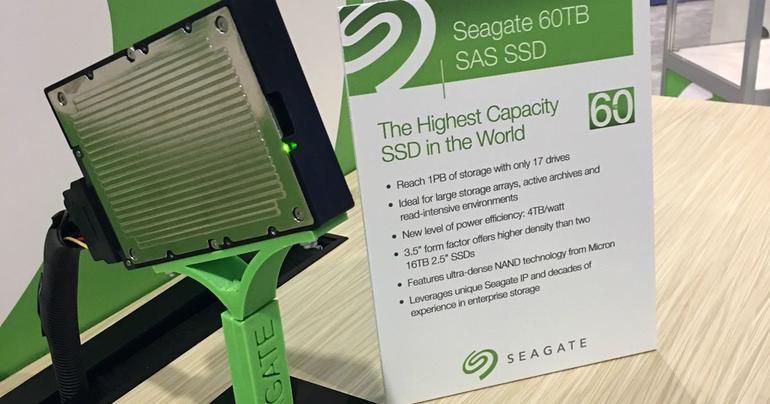 I had to look up 'PB' - I now know it stands for petabyte. I wonder how long before we see a 1PB drive?!

Thinking about it, all you have to do to make a big SSD is daisy chain a load of chips. There are no physical or mechanical problems to consider apart from size, maybe.

Imagine having a 60Tb SSD full to capacity with data fail

floppybootstomp said:
Imagine having a 60Tb SSD full to capacity with data fail