I note with interest Watneys Party Seven is attempting a comeback. This probably follows the successful sales of huge tins of Nordic beer in supermarkets and offies. Anyone here of a certain age will remember Party Sevens, they were always the alcohol that certain male members of the group would bring to the celebration and then proceed to drink the canned and bottled ale everybody else had brought.

This of course left a dearth of Party Sevens near the end of all the revelry and by then everybody was too drunk to figure out how to open the bloody things. Tools to puncture the large pressurised tins were searched for and a collection of screwdrivers, chisels, horseshoes and grandpa's false teeth gathered. Then a hammer.
The first blow trying to extract the precious beer usually ended in a one metre high geyser of foam which usually managed to soak a nice family photo half way up the kitchen wall. If we were lucky then eventually we might manage to gather about five pints from a dozen seven pint cans.

If Watneys (I thought they'd gone bust?) are re-marketing this dubious pleasure I just hope the beer tastes better but most of all that they've allowed for easy opening of the container. 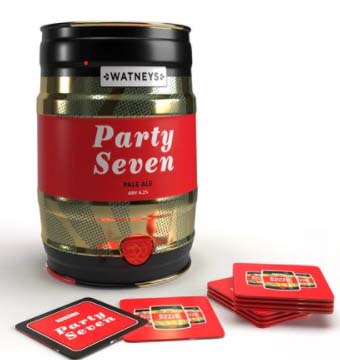 Watneys offered a Sparklets beer tap designed for Party Seven. You could buy it for 59s 9d (old money) will cost £12.99 on Ebay.

... or, using an ice pick, puncture two holes, one to pour one to allow air in and, pour carefully.

Remember them very well. Never liked the beer though.

Me and a mate always used to buy these to watch the FA cup finals each year.
We got opening them down to a fine art after a while, yep as you say Mr Flopp's, Iceland's, Lidl's and Aldi's have been the places where you can buy these large kegs for a while now, lets hope the party 7's taste has got better
Ad

Only southeners would call it beer. Tried a mouthfull once and spat it out.