Nikk Tech have been taking a look at the Thermaltake Core P5 Mid-Tower - here's a snippet from their review:

The Core P5 is nothing like the rest of the Core family of PC cases by Thermaltake since not only is it a wall-mountable open-air chassis but it also features a large transparent acrylic panel at the top which allows you to see every single component installed. Unfortunately to cut down cost instead of using tampered glass Thermaltake had to use acrylic for the top cover/panel (the end result however is not much different) and SPCC cold rolled steel for the main body which boosts the weight of the Core P5 to 12.2Kg. The Core P5 supports up to ATX sized mainboards and also features a total of 8 PCI expansion slots, room for up to four 3.5"/2.5" drives, mounts for up to 7 fans (4x120mm/3x140mm) and/or a single 280/360/420/480mm radiator and enough space to install CPU coolers up to 180mm in height and 320mm (280mm with a reservoir installed) long graphics cards. So since the Core P5 was mostly designed with liquid-cooling systems in mind we'll be showcasing it later on with the latest Pacific RL240 Water Cooling Kit again by Thermaltake.
Click to expand... 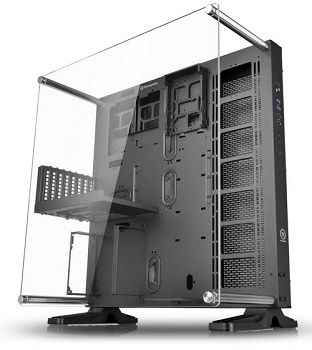 ... not sure why they bothered with the plastic bit.

Would help stop prying fingers I guess. I actually quite like that. If you don't live on a main road and out of the way of lots of dust it would be quite an eye piece mounted on a wall
A

Getting more and more tempted as we go.

Coincidentally the Black version is under £100

All 5* reviews on Amazon