Samsung’s new 512GB SSD is smaller than a US postage stamp, lighter than a dime

If you want the ultimate in storage and speed in your PC today, then an M.2 SSD like the Samsung 950 Pro is where it’s at. Up to 512GB of memory boasting write speeds of 2,500MB/s in a package no longer than 6cm. Get the right motherboard and you can just slide it into a slot on the bottom never to be seen again. But technology moves on, miniaturization happens, and Samsung has created a new, ridiculously tiny SSD.

Samsung has for the first time (and an industry first) created a complete 512GB SSD solution in a single one-chip package. That’s the storage using 20mm NAND chips, 4Gb of DDR4 memory, and a controller in one to create an SSD called thePM971-NVMe.

That’s impressive enough, but then you realize the size of this thing. Samsung has managed to cram the entire SSD on to a chip that measures just 20 x 16mm and weighs about a gram. For comparison, a typical US postage stamp measures roughly 22 x 25mm and a dime weighs in at 2.3 grams.

You can easily fit up to seven of these chips on to an M.2 SSD if my calculations are correct, suggesting there’s some massive storage gains to be had for that format soon. However, Samsung’s main focus for the PM971 is laptops. That’s because this chip won’t need to adapt to fit one of the industry standard slots, it can instead be soldered directly on to the motherboard. As it’s only 1.5mm thick, Ultrabook manufacturers (and Apple) will be quick to order.
Click to expand... 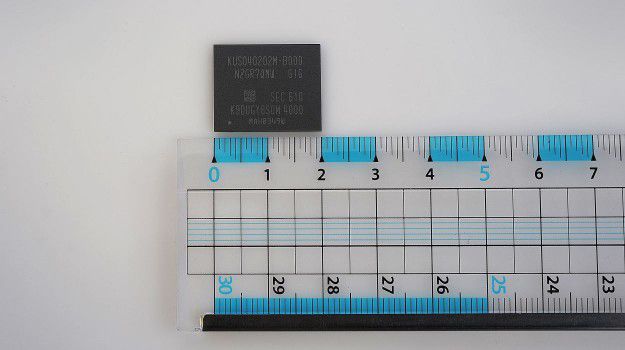 How long before Apple sue Samsung on this ?

Motion in the ocean.

They need to be putting these in phones and do away with 16GB/32GB etc sizes.

That's incredible. Agreed that this would have great application in mobile phones

. Damn clever how we're still able to condense and improve things - at some point we'll surely hit a brick wall until the next innovation!
Ad

That is truly amazing.

Just how small can we get things?

I recently put my whole music collection on one USB stick, mainly for use in the car. CDs - what are they? Going the same way as cassettes?