I recently bought a couple of Xbox 1 games online from the GAME store in their '2 for £20' offer Assassins Creed Syndicate and Dead Rising 3 and am at this moment installing them. ACS is going to take up almost 40Gb and after both games are installed I will be getting close to filling the consoles 1Tb HDD and should consider an external USB3 disk for extra storage.

I've never been a great fan of the Assassins Creed series but Syndicate is set in old London Town, received good reviews and so I thought it was worth risking a tenner. It's still £34 at Steam for the PC version. I shall see how it fares when it's installed and the same for Dead Rising 3.

I thought I'd catalogue my console games and below is a (Libre Office) spreadsheet which includes my summary of each games worth. My rating table goes thus:

As well as those games listed I have Forza hub and a Trackmania demo installed. I have the Xbox 1 S version which has an integral power supply and soon Microsoft will release their new Xbox console - the Xbox One X which looks to be pretty damn good and has 6Gb of DDR5 memory to quote just one tech spec. It will also cost £449 on launch with a 1Tb HDD which makes me think I'll hang on to my S version for quite some time yet.

So, heres my console games. 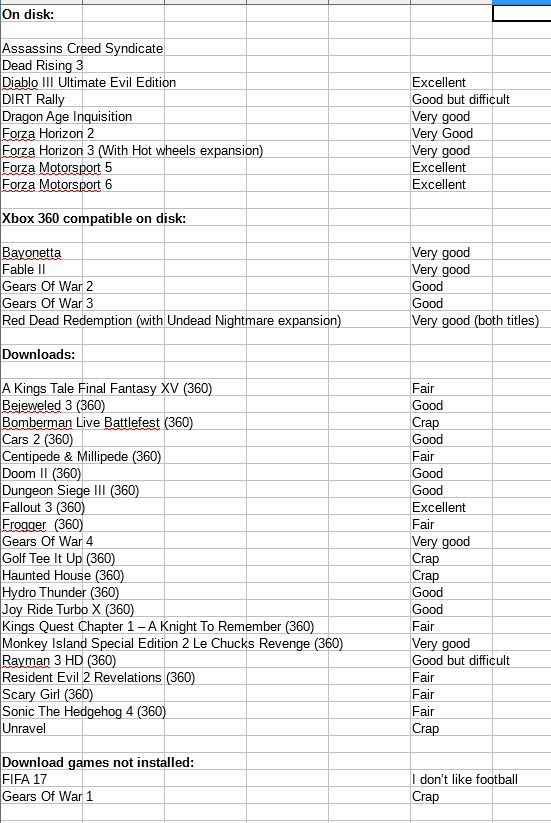 You've got a decent selection of games there - but I couldn't help laugh at your 2nd last entry... Was FIFA 17 a freebie that came with the console?

You should trade it in!

I completely forgot about the "Undead Nightmare" addon for RDR

- I loved that game and meant to come back to the addon, but never did. That's next week sorted for me!

FIFA 17 did come with the console, at time of purchase that was the only version available if I wanted to buy the 1Tb version of the console, much to my annoyance.

I did try to sell the download code at a more than reasonable price but no takers so thought I'd install and try it. It took up a huge amount of space as I recall and when it was ready to play looked as though it only worked well in multiplayer.

And when I did try to play it I couldn't figure out what to do anyway, I don't know football, I don't even know what offside is

So I uninstalled it and wrote it off.

Ah that makes sense then

. Bit of a shame it's not possible to resell digital games like that, as it's really popular!

Ah nice, didn't know you were a Forza fan too. Have you tried the FM7 demo yet?

RE: external drives, I've got a 1TB Samsung M3 which is grand, USB 3.0 powered so no extra faff. and the games do run a little faster off the drive rather than externally too.
Ad

V_R: Nope, haven't played the Forza 7 demo yet, wasn't aware it existed, I'll give it a go.

I've tried Assassins Creed Syndicate and Dead Rising 3 now and I'm not mad keen on ACS but DR3 looks like it could be fun. ACS may be set in London but it still uses a similar game engine to all the other AC's I've played which, to my mind, is frustrating and annoying.

I've played AC1 and own 2, 3 and Black Flag and of those the only one I've mildly enjoyed is Black Flag (it came free with some hardware I purchased a whiles back). In DR3 you basically wade through hordes of Zombies trying not to get killed and killing as many of the blighters as you can as you go.

I think the best Zombie games I've ever played are still Left 4 Dead 1 & 2.

I updated my Xbox 1 spreadsheet with my own ratings for my 2 new games and tbh I'm a little disappointed with both of them. I had also forgotten to list the JRPG Lost Odyssey in my list but it's there now. 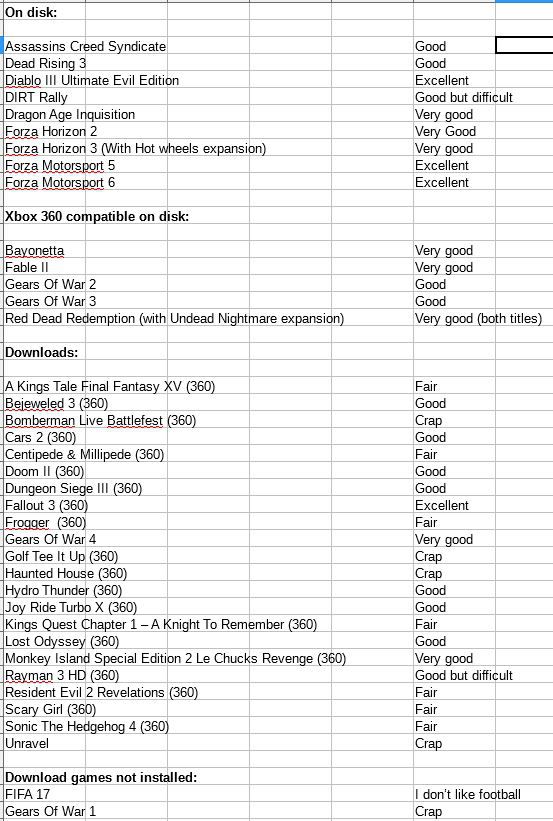