Of the feathered kind....

From a distance it may look like a UFO is preparing to land.
But rather than being a scene from a Hollywood sci-fi film, these images capture the moment thousands of starlings flocked together into the shape of a spaceship.
Nature photographer Damian Waters caught the extraordinary spectacle, as he watched the birds swarm to seek the warmth of nearby cattle sheds. 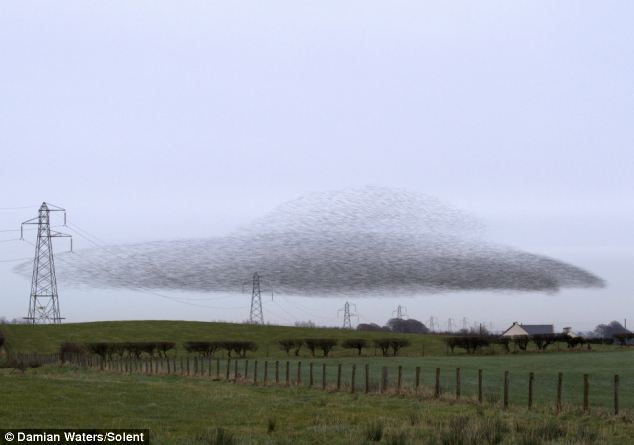 Swarming to seek shelter in a nearby cattle shed, thousands of starlings gathered together in the skies over Rigg near Gretna in Scotland, to form the shape of a spaceship 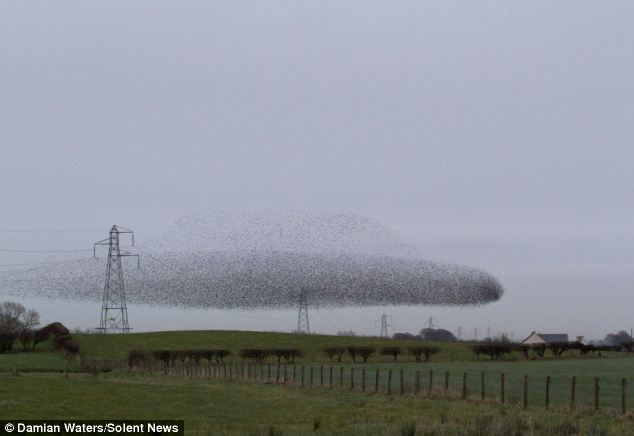 Nature photographer Damian Waters travelled to Scotland with the hope of capturing the phenomena. He watched as the birds soared above his head creating stunning images in the winter sky at dusk


As they soared above the 44-year-old's head, they created an array of shapes in the winter sky at dusk in the skies over Rigg, near Gretna in Scotland.
Mr Waters travelled 110 miles from his home in the Wirral, Merseyside, to photograph the phenomenon of the starlings flocking together.
The persistent snapper waited for nearly two hours until the first of the birds appeared.

He said: 'At first there were just small groups of starlings in the fields, before they started to come in squadrons of 40 or 50, flying all over.
'Then suddenly, before I knew it, there were thousands all amalgamating together and they had formed the shape of a UFO.
'It was spectacular to watch.'
The images show the birds taking flight, filling the sky as though it was thick with smoke during the last few hours of sunlight.
Another shot reveals the swarm of birds gliding together to mimic the shape of a dolphin. 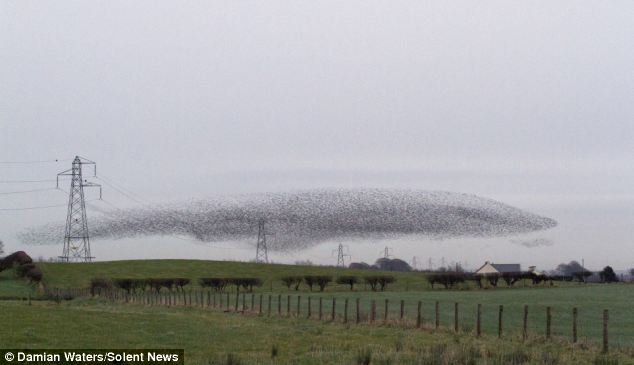 This image shows the birds flocking together forming the shape of a dolphin with some leading, depicting the nose while thousands in pursuit gather to create the body, fin and tail 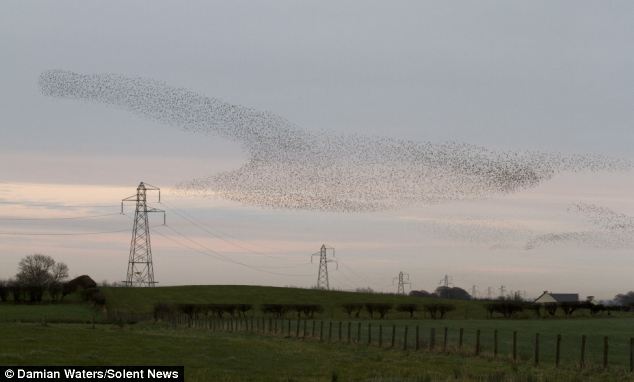 Mr Waters said: 'Starlings have a bit of a bad reputation. People see them in their gardens and think they are raucous and ugly, or that they bully other birds. But when you see them like that, it's one of nature's greatest spectacles'

Saw about a thousand all swarming on Friday just a mile from where I live..It was awesome!

Imagine if they all pooped at once

floppybootstomp said:
Imagine if they all pooped at once

Boy, you do have some imagination