Are cheap LED projectors any good?

I'm fairly sure I know the answer to this question, judging from the fact that <£200 LED projectors aren't a hot topic and only recently available... but I've never seen one before to see what they're like.

Does anyone own one of these "mini" projectors? I've seen super cheap LED projectors on places like Gearbest and EBay for a mind boggling £30 with some very dubious specifications, ranging to ~£200 projectors from the likes of Philips and Asus which I'm sure are much better.

Here's an example of one of the cheaper variants:
https://www.amazon.co.uk/ELEPHAS-Color-Portable-Projector-Entertainment/dp/B00ZEIABLG/

And a more expensive (£250) Epson one:
https://www.amazon.co.uk/Epson-EB-S04-Portable-Versatile-Projector/dp/B016MPIJBI/

I'm imagining that they're fine for occasional office work and presentations, but a long way off being good for home cinema - but if anyone has one then please do share your thoughts!
Ad

I don't have one but I'd be dubious. With projectors the quality of the lens is a big factor, as with cameras, and quality lenses don't come cheap.

As you say, fine for presentations and demos and that's probably the market they're aimed at but I think to make a personal judgement you need to see a demo where one is playing some quality video material.

I have had an experience with an unbranded generic LED projector.

The picture was very dim, even in a dim room. Picture quality was very poor, with very large pixels. Contract was woeful, no way could it achieve the ratios which it claimed that it was capable of. The resolution claimed that it was 1080p (and it did accept a 1080p signal over HDMI), but it was obvious that it was being downscaled to 800x600.

It died after two months with an extremely loud bang and knocked the breaker out. When we opened it up, we found that it was not even an LED projector, but instead one of the traditional gas discharge lamp types. The failure was clearly due to the power supply, which had obviously suicided and was burned beyond recognition.

I would go with the Epson one. Epson have put many years into developing and perfecting projection technology. And if something goes wrong, I'm sure they'll help you out.

Thanks Capt. Jack - that confirms my suspicions about them! I wonder how many of these cheap imported goods actually conform to CE testing

Ian said:
Thanks Capt. Jack - that confirms my suspicions about them! I wonder how many of these cheap imported goods actually conform to CE testing

Any CE marks these "projectors" or similar fake electricals bear are not actually CE marks. If you compare the CE mark on a fake electrical product to a known legitimate product with a real CE mark, the fake one will have virtually no spacing between the C and the E. That's because it's not a CE mark, it's actually a "China Export" mark.

Here's a good example which will help you to identify real CE marks and "China Export" marks.

Is it a coincidence that the CE mark and the so-called "China Export" mark look nearly identical?
I think not, it has been done deliberately!

That means that if the product bears a "China Export" mark, it was probably never CE tested!

Ah yes, I remember reading about the fake CE marks, but forgot about it until now. You would think they were trying to mislead

Ian said:
Ah yes, I remember reading about the fake CE marks, but forgot about it until now. You would think they were trying to mislead

Check out any generic PSUs that you've got lying around. I'm pretty sure that my "Sumvision" generic PSU from this thread, has a "China Export" logo on it, masquerading as a CE logo.

Despite being nearly 6 years old, this PSU actually still functions, but I wouldn't dare to use it in my gaming PC. At only 26A on the single (it claimed to be dual rail

) 12V rail, it isn't capable of safely powering any high-end graphics card.
So I decided to use it to power an old car stereo, which in turn acts as a cheap and nasty amplifier for the outdoor garden speakers.

The car stereo is fused at 10A, so it shouldn't be pushing the PSU anywhere near its limits.
When I return from Fuerteventura, I might do a topic on how I set this up.

But anyway, I digress. Avoid the no-name China Exports, and that applies to most products, especially electronics!

Thanks for that warning about C E marks, I never new that Capt Jack

As luck would have it, this fan arrived through the post today for a project and look at that lovely (very believable) CE mark 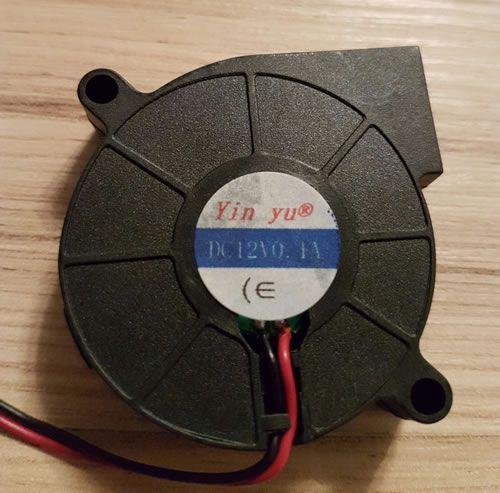 No it is not ligit it is a fake and should not be used, it is a foreign far eastern probably or Chinese fake and most likely to be dangerous. I am speaking with my fire service hat on here DO NOT USE IT IAN.