A stroll through Manchester

As promised, I decided to take a leaf out of @floppybootstomp's book and share some photos with you of our home town

This is St John's Gardens - there used to be a church here before it was turned into a park, and not many people know that there are around 22,000 bodies buried underneath the area: 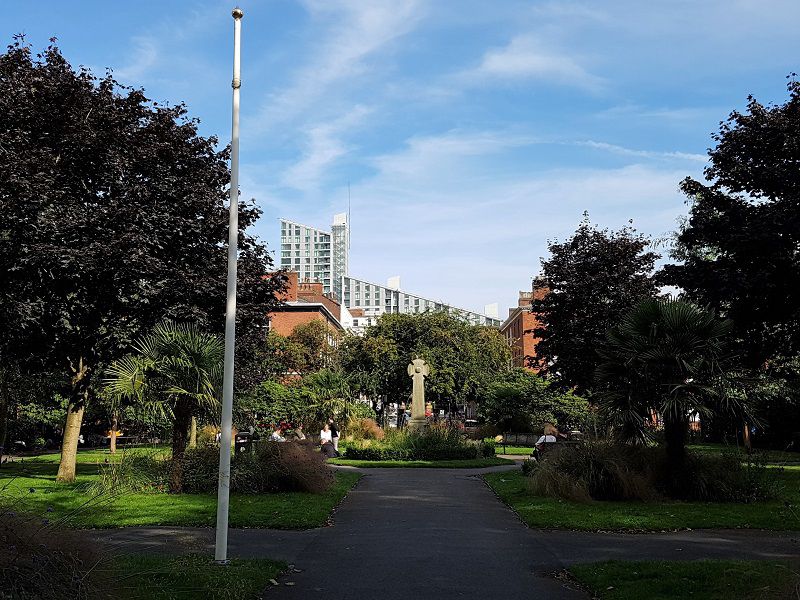 This is a part of Spinningfields, which is the new business area of Manchester. I used to work in the building on the right, top floor: 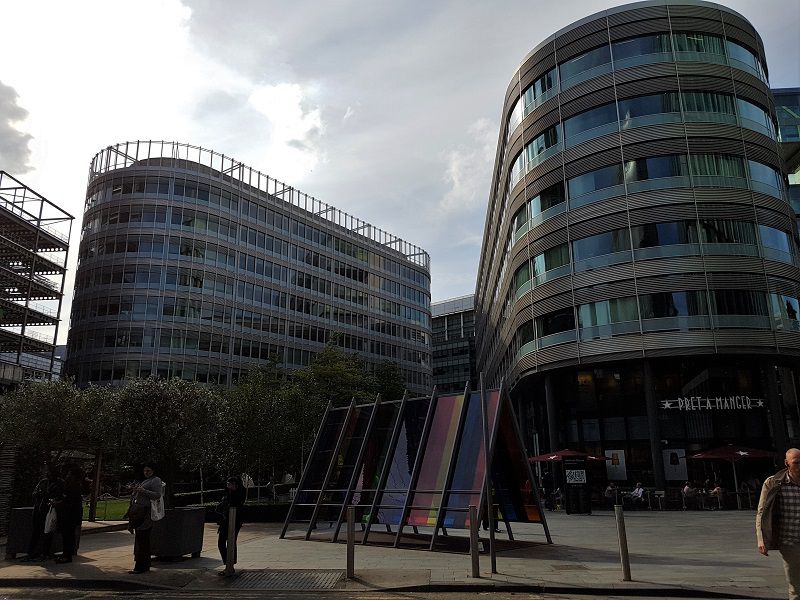 The John Rylands Library which is on Deansgate (one of the main streets through the city centre) - feels a bit like Hogwarts inside. You can see other buildings in Spinningfields behind it: 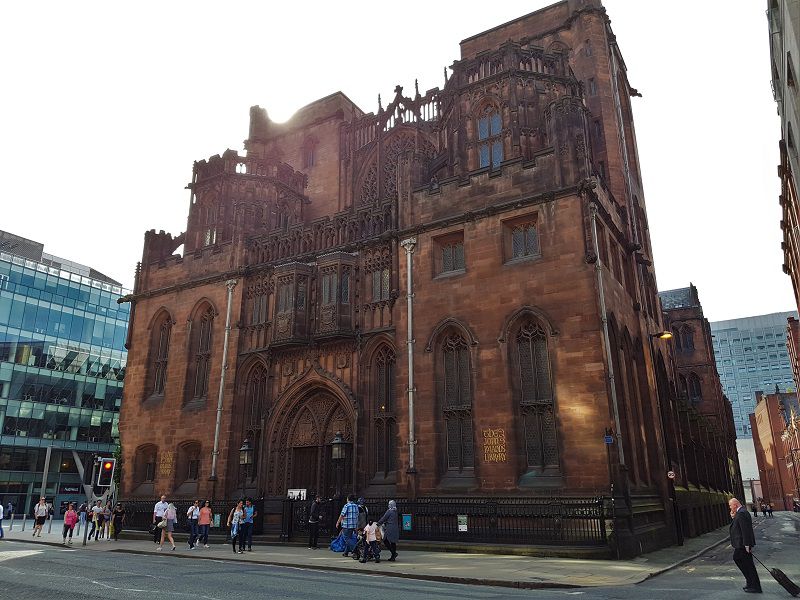 This photo was taken in St Anne's Square - this is the Royal Exchange Theatre, and the building was previously used to exchange commodities: 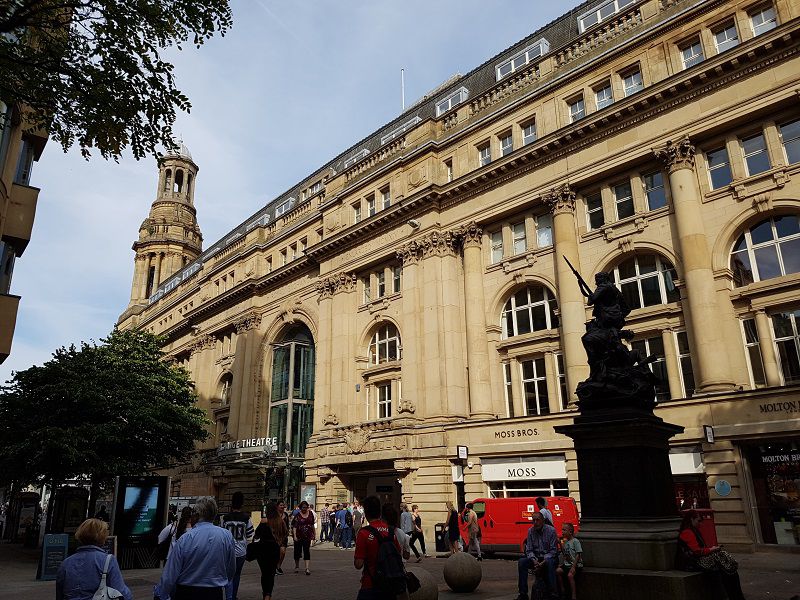 The theatre inside is round and surrounded by raised seating. The cheap seats are right at the front on a low bench, which makes for great viewing! Panorama photo: 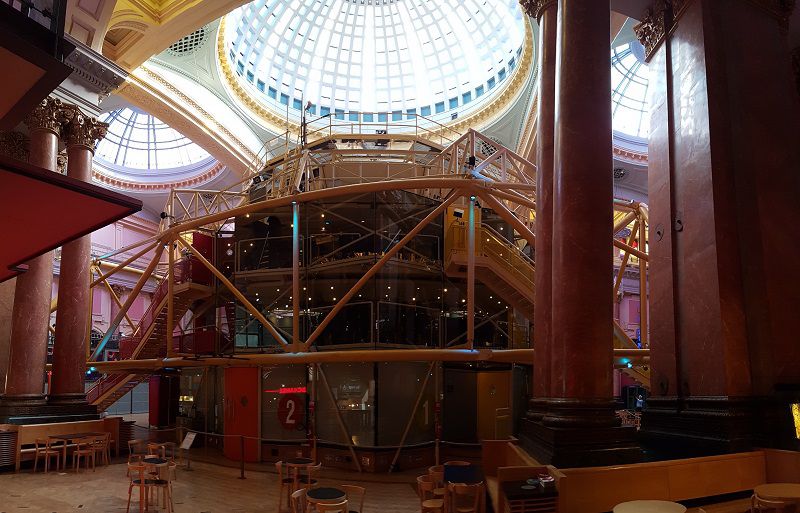 The trading boards from the last day of trading: 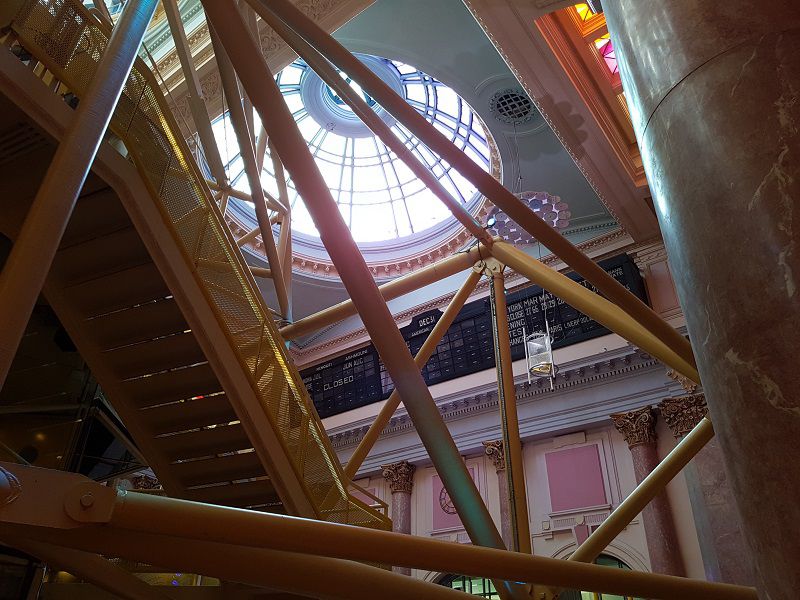 This is Shambles Square on the left. The black and white building on the left is Tudor, and the one in the middle is an extension that was added in the 1700s. Both were taken apart, relocated and put back together again in the 1990s: 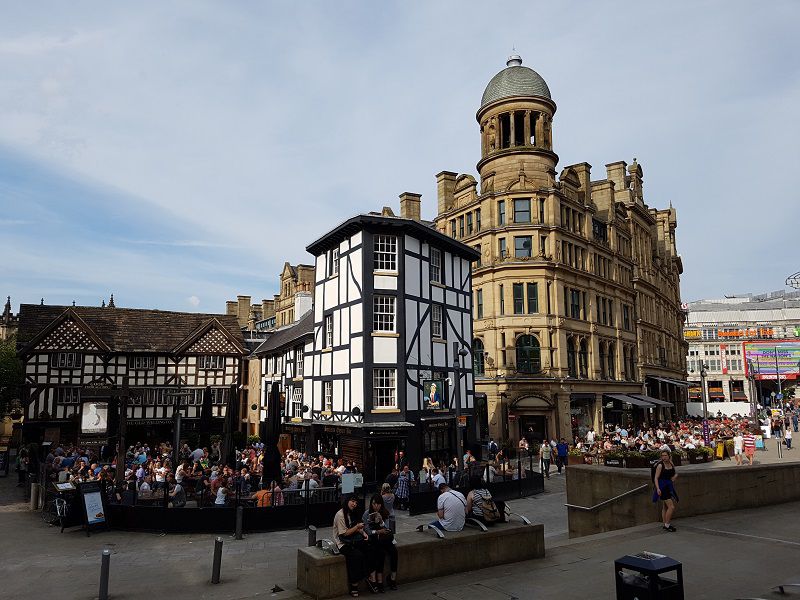 This is the Metrolink which runs throughout Greater Manchester. It's expensive and prone to problems! You can see the Printworks on the left which houses a number of dodgy bars and the Odeon (including a proper IMAX): 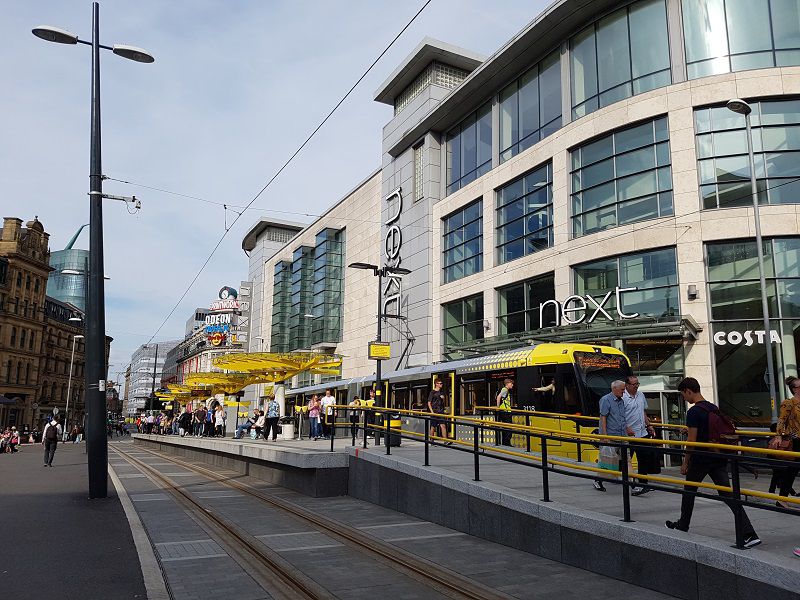 This is Exchange Square, which until recently was called The Triangle, because it's triangular. The Corn Exchange now houses a good selection of restaurants and bars. The weird looking building with the antenna on the right was previously called The Urbis, and is now a football museum: 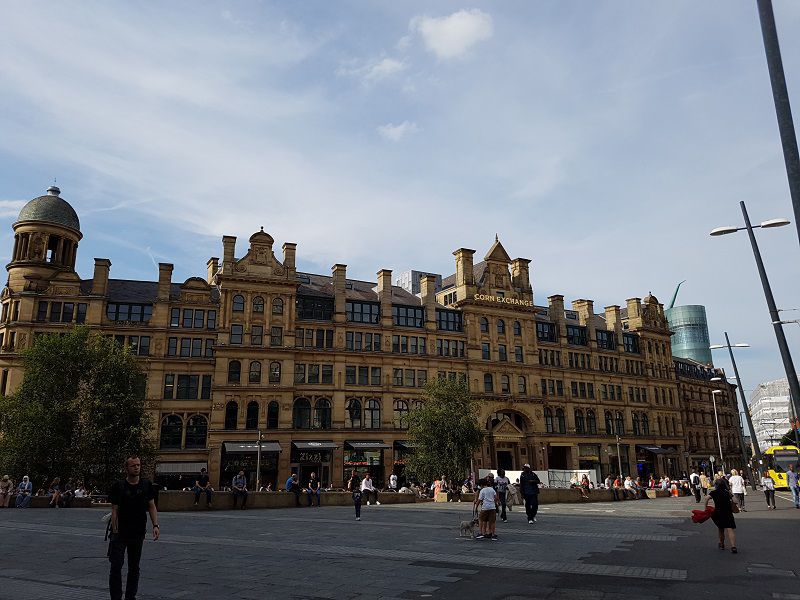 This postbox was very close to where the IRA bomb went off in 1996, and survived the blast: 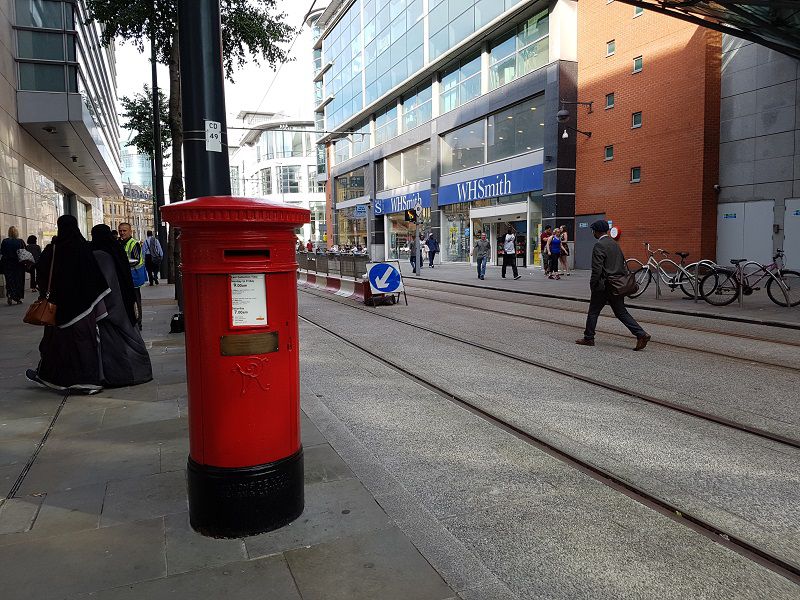 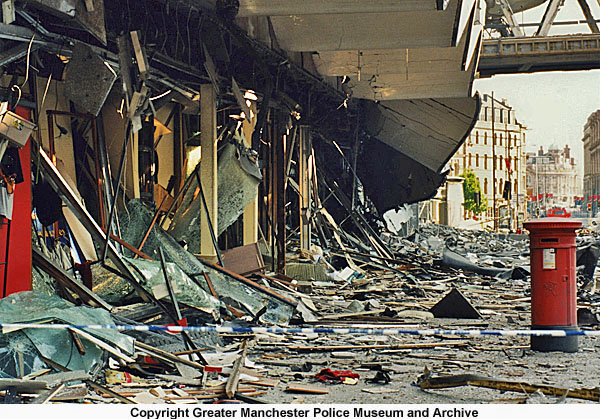 The re-built M&S (you can just about see the post box on the far-right): 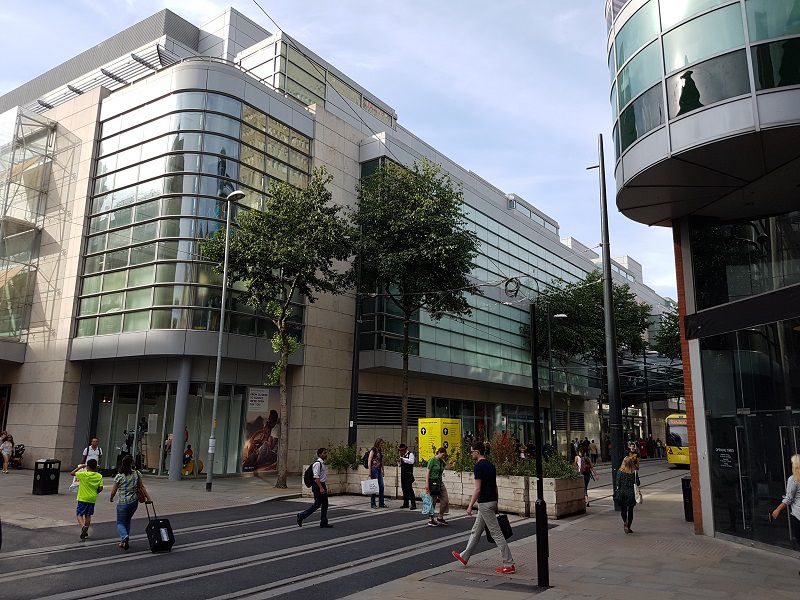 Town Hall, in Albert's Square. The floor inside is a mosaic of bees and cotton flowers (if you didn't know, bees are the symbol of Manchester due to the industrial past, and Manchester made its money from cotton): 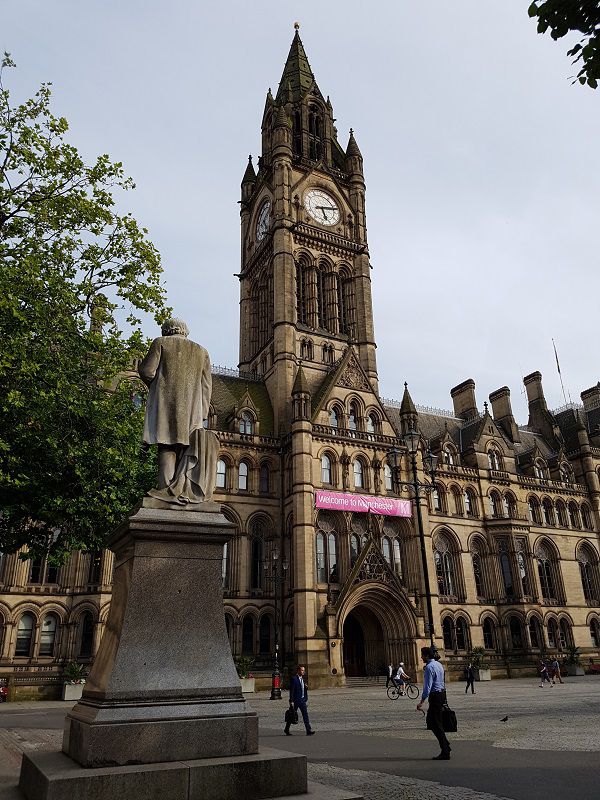 The town hall is linked to the next-door building by overhead tunnels: 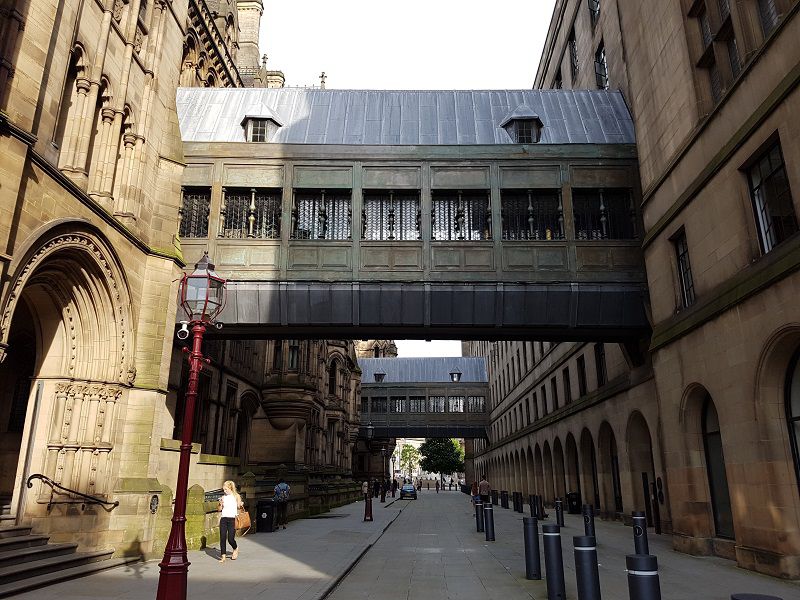 Next door to the town hall buildings is the Central Library, taken from St Peter's Square (this photo was taken using panorama mode, because there was building work going on behind me and I couldn't fit it all in): 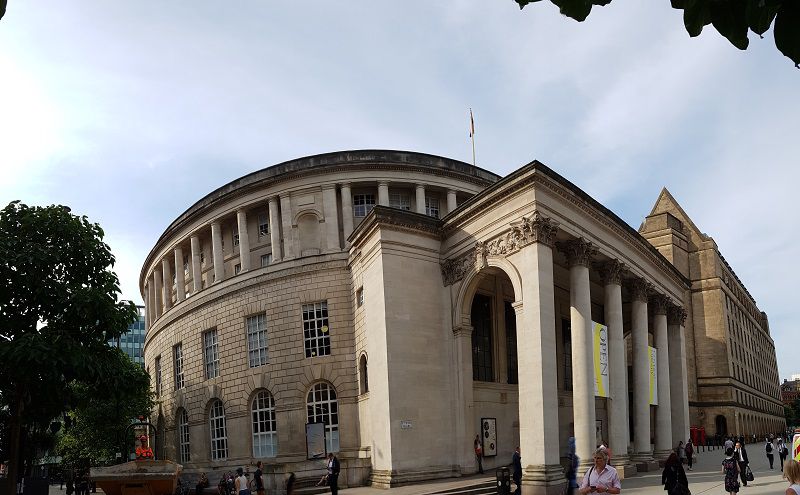 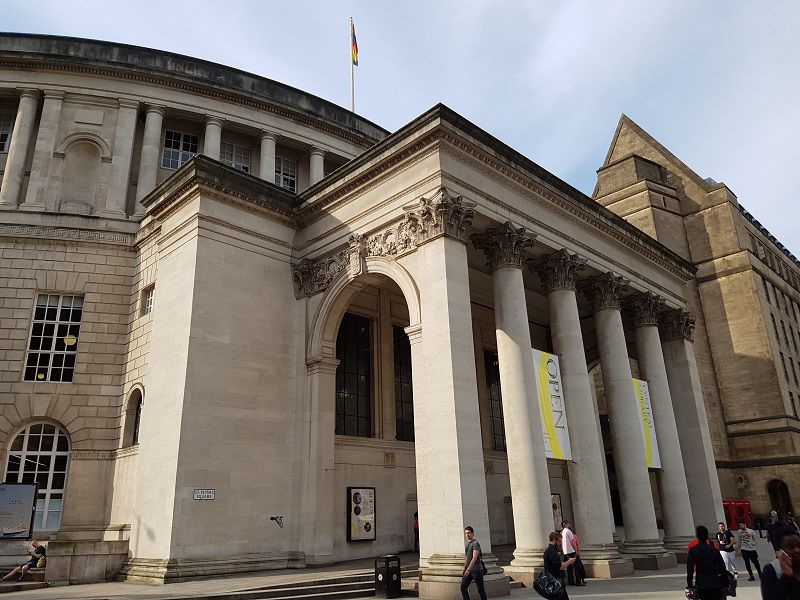 The Beetham Tower, which is a Hilton hotel up to the middle bit, then apartments from the middle to the top. There is a good bar on the middle floor called Cloud 23, and it has great views: 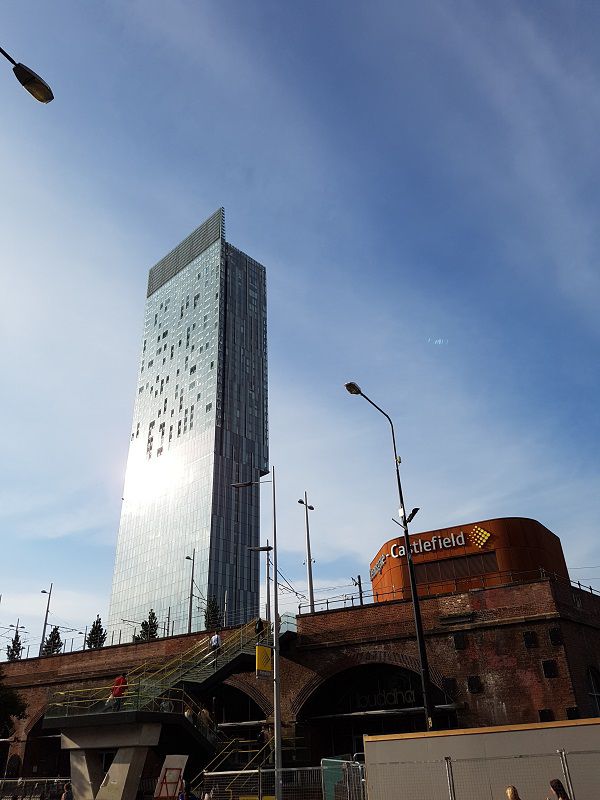 View of the Beetham Tower from Castlefield. Castlefield was an industrial area, and it's where the Bridgewater Canal terminates. It is now a lovely area right in the city centre, away from the hustle and bustle: 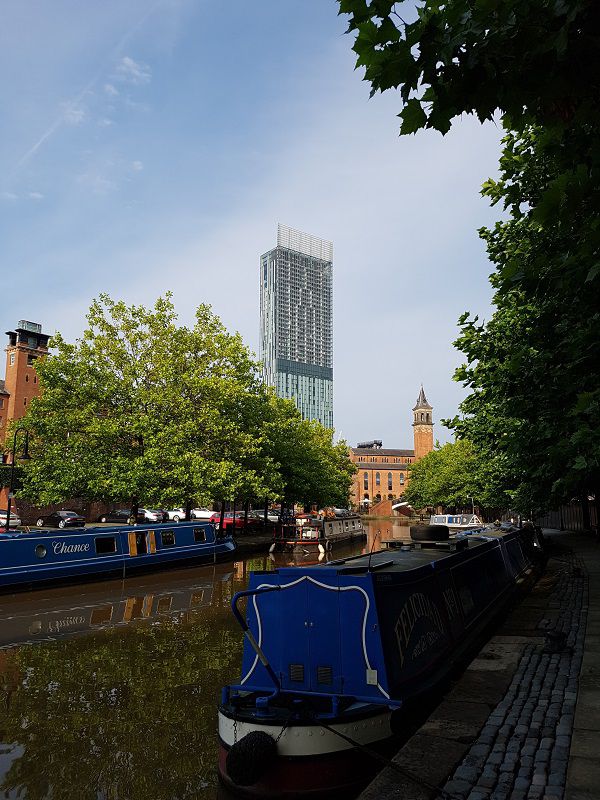 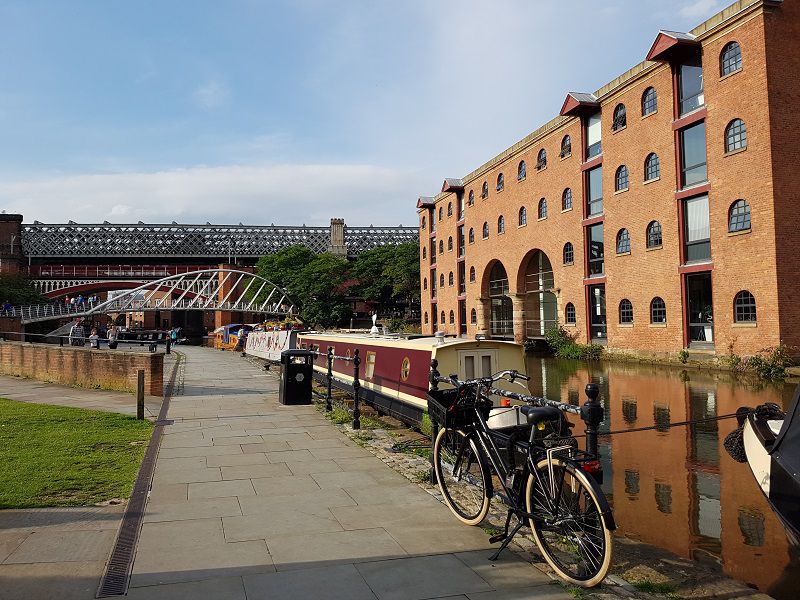 This bridge leads to Lock 92 on the canal, and there is a great bar and restaurant next to it. Behind the trees on the left is a place called Barca which is a bar originally owned by Mick Hucknall. It has been through a number of changes over the years, and has never been as popular as the other places in Castlefield: 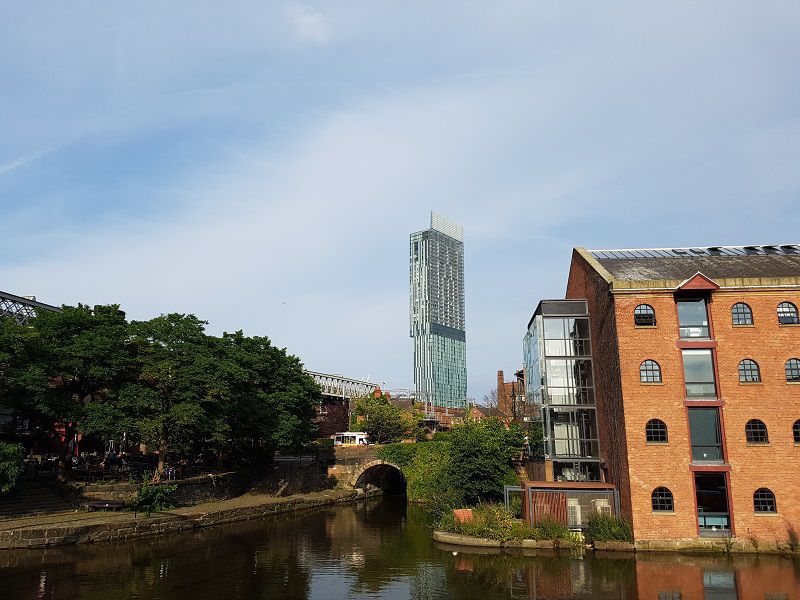 Another photo of Castlefield showing the railway bridge and tram bridge: 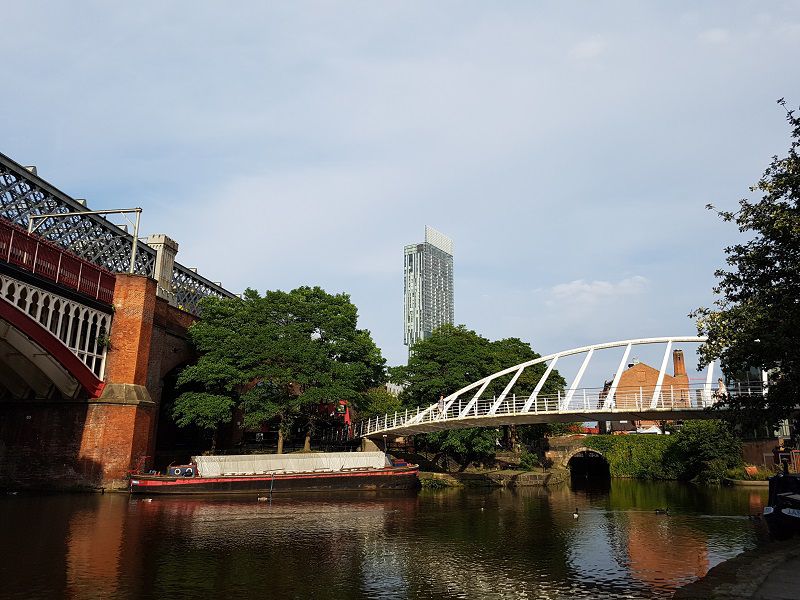 Went for a drink in Barca to see if it had improved. Can't fault the view! We used to live in one of the apartments in this photo: 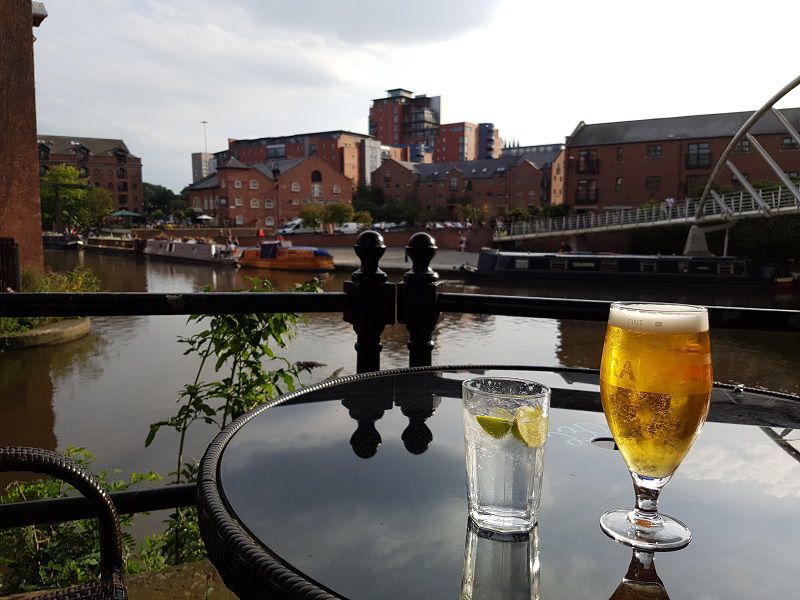 Castlefield had a Roman Fort here originally, which is how the area got its name: 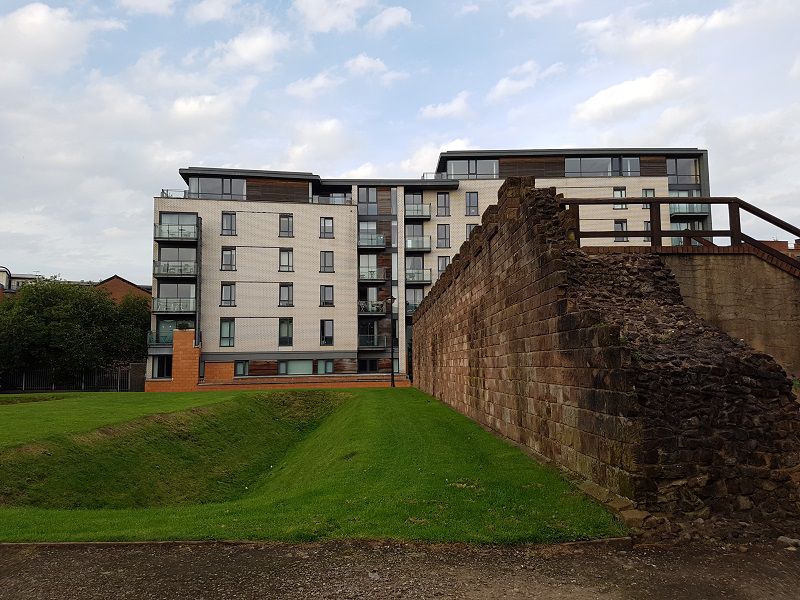 Museum of Science and Industry (MoSI) is always worth a trip - and best of all it's free! 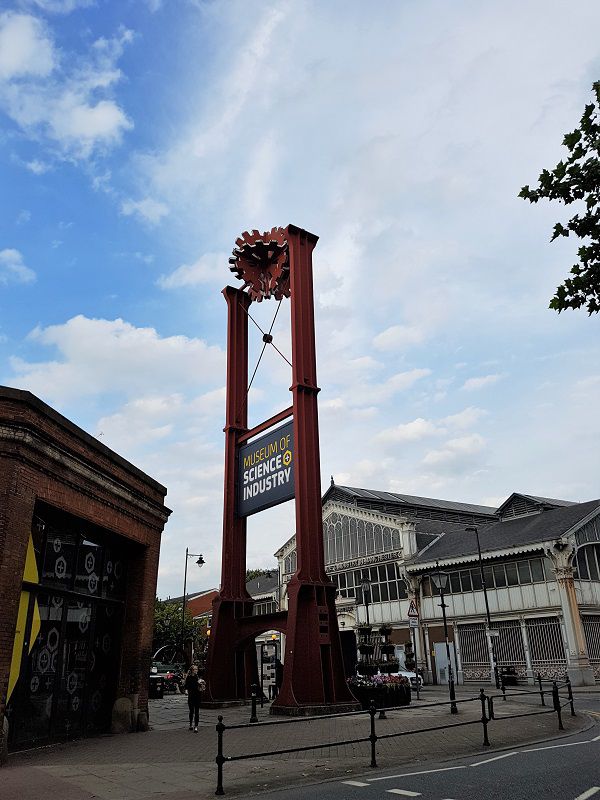 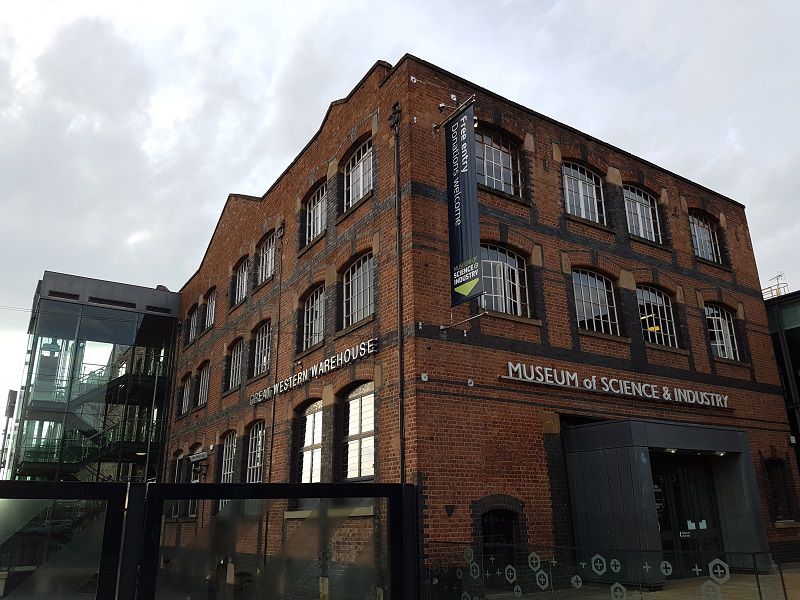 Behind MoSI are the old Granada Studios - here's a peek of the original Coronation St set. Apparently when they originally cobbled the road they laid the cobbles the wrong way and it had to be re-done, and I assume that's why these cobbles are also the wrong way: 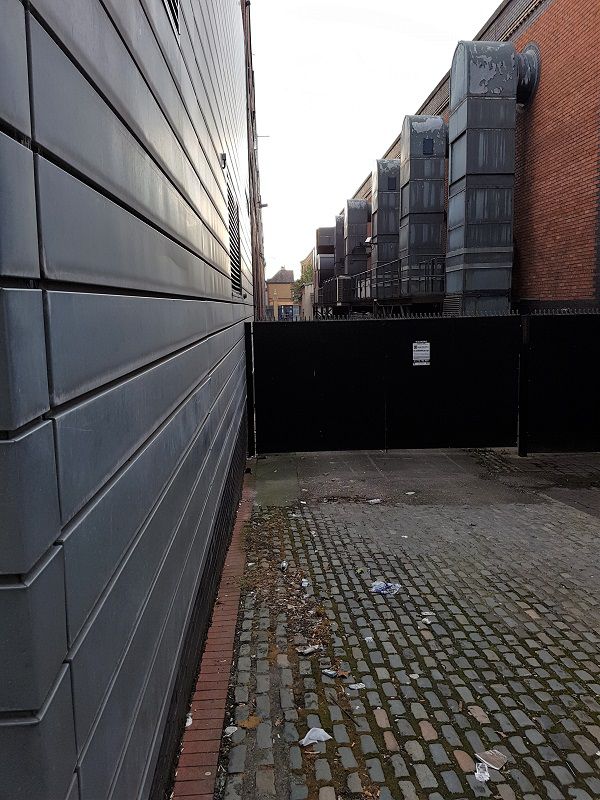 All that walking is thirsty work! I had a 'birthday cake shake' at a place called Home Sweet Home - it's cake blended into the milkshake, with a full slice of cake on top. And yes, those are party rings too 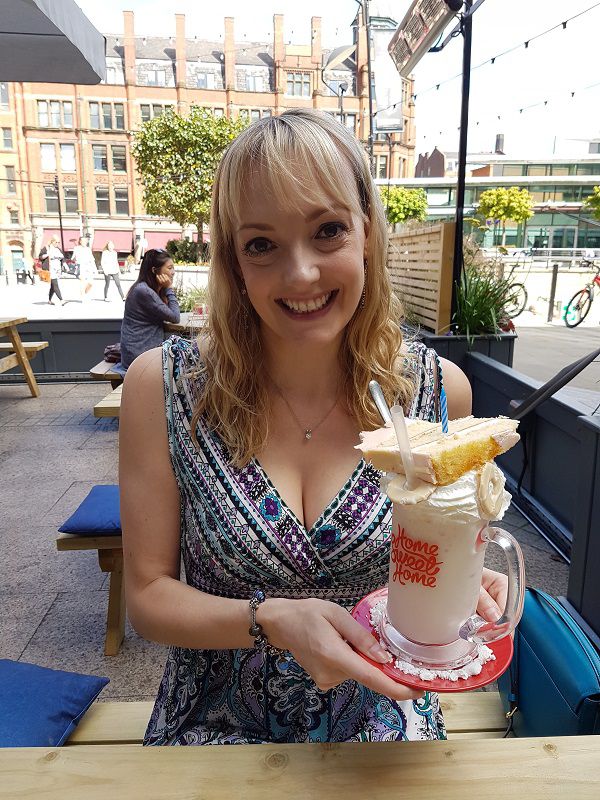 Should have checked the small print! 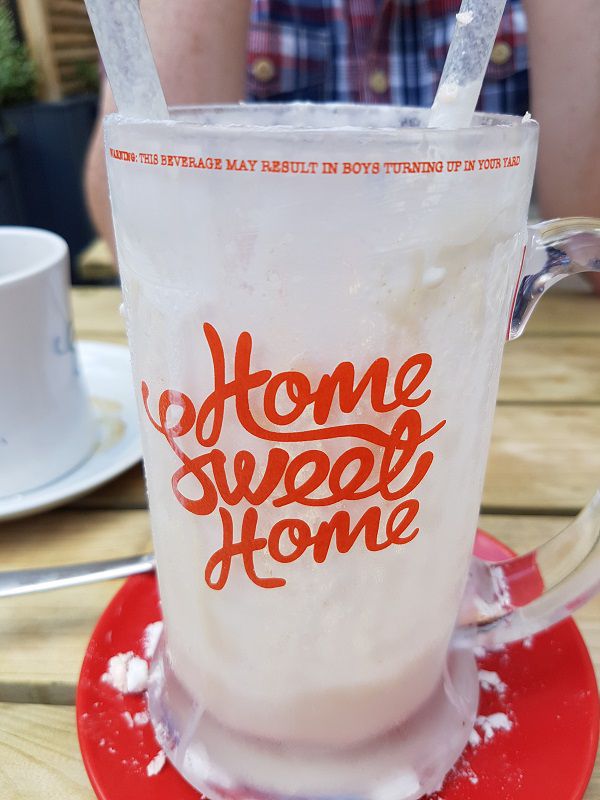 Should have mentioned, all photos taken on my Samsung S7

Just checking this out on GMaps, it looks kinda odd surrounded by all the new modern buildings.

The camera in the S7/Edge is really very good isn't it.

Oh and that is one hell of a milkshake!

V_R said:
Just checking this out on GMaps,
Click to expand...

Yeah I know what you mean about the building looking odd! The building next to the library couldn't be more different - scoot up the road a bit and you'll see what I mean, and if you look closely you'll see a glass protrusion coming out of the ground. That's a staircase that leads down to a restaurant called Australasia which has great food and is great for people watching (ie WAGs galore)

I'm still really pleased with the camera on the S7. There were some photos that I had to edit slightly, but that was more because the sun was shining right at me and it threw the contrast and saturation off.


V_R said:
Oh and that is one hell of a milkshake!

The most amazing thing was that I didn't feel too sick afterwards!

Great pix Becky, thanks for posting.

This thread is my own guided tour of Manchester

I only been to Manchester once, stayed just on the outskirts somewhere in digs for a couple of weeks whilst working. This would have been late seventies or early eighties.

Just outside of Manchester a large Gas Processing site had been built over several square miles. It was the last site designed to deal with Natural Gas and was completed just as the UK switched over completely to North Sea Gas, which made this site redundant on opening day.

It was a huge industrial complex, it took about twenty minutes just to drive round the border and British Gas were at a loss what to do with it which must have caused them some upset as it cost an awful lot of money. Some bright spark had the idea of using the many on site storage tanks to store other liquid and gaseous products so that's why I was called in, I had to X-Ray all these storage tanks and declare them safe and fit for use.

I remember it was rainy most of the time and the people staying in the digs with me were right miserable so and so's. However, the fellas I worked with were a great bunch of blokes and me and the foreman went out for a drink a few times.
Ad

PS: Is The Hacienda still there?

floppybootstomp said:
I remember it was rainy most of the time
Click to expand...

The Hacienda went a long time ago I'm afraid - late 90s I think. It was knocked down and replaced with an apartment building - called The Hacienda.

@Urmas well if you turn up in my yard I'll know the milkshake worked!

Becky said:
@Urmas well if you turn up in my yard I'll know the milkshake worked!

Dunno... product group "Boys" may or may not come with "Best Before" date.

I enjoyed walking around Manchester with you @Becky!

You have shared some great photos of the city, and that is such a good pic of you!

Pssst!... Please tell us that you had help to consume that birthday cake shake! It looks amazing!

velly interesting walk-a-bout ... tho' I frown on the use of the phonographic material at the end.

Thanks @Taffycat! Yep, I can confirm that @Ian selflessly volunteered his services to help me with that milkshake. I think I may have developed diabetes if he hadn't

floppybootstomp said:
PS: Is The Hacienda still there?
Click to expand...

Some very interesting pics and facts you have posted Becky

Some very interesting pics and facts you have posted Becky

Glad to hear you found it interesting @Abarbarian

A friend of mine is a tour guide and she knows all sorts of interesting facts about Manchester - clearly some have sunk in over the years!
Ad

Loved the pictures which truly tell a tale of Manchester. The milkshake looked yummy

Well I have just come across this post, what great photos Becky. I have never been to Manchester only the industrial areas outside Manchester in the 1970's. Your photos have made me want to have a trip up there now. once again terrific photography.

Where are the pics of China Town , Coronation Street and the many bars of Canal Street ?

Abarbarian said:
Where are the pics of China Town , Coronation Street and the many bars of Canal Street ?

No photos of Canal St because it's a bit rough around there... Shame because it used to be a good place for a night out!
You must log in or register to reply here.