Over the past few years we've seen great advances in case design and style, largely brought about by the modding community. It is clear to see that even value cases are much more advanced in style and features then the beige bricks that used to house our PCs in the not-so-distant past. One recent style has been transparent, acrylic cases, one step up from the case window we've been seeing in standard cases, putting your whole PC on show, innards and all. 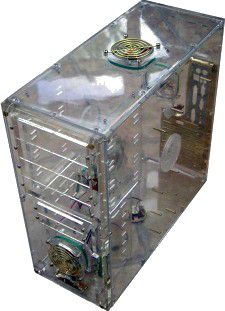 Terra-Byte Aurora Case​
In this review we're going to be taking a look at the Terra-Byte Aurora clear acrylic case from UC-Solutions, which promises all the style of a high range clear case without hitting the wallet quite so hard.

The specifications of the case (according to the manufacture) are...
Included Items
There are no special accessories with this case, just the minimum needed to get going.

The case is well featured for a budget case with 5 pre-fitted colour LED fans, 2 USB ports with 2 audio ports on the front and the usual buttons, LEDs and system speaker (fitted on the floor of the case). The front of the case also houses the obvious drive fittings, with 4 x 5.25" and 2 x 3.5" exposed drive bays, along with 6 'hidden' hard-drive bays. 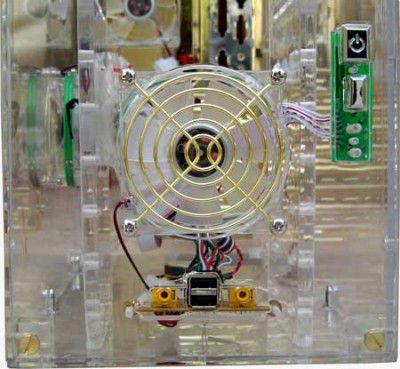 The fans are spread all over the case with two on the side, one on the front, one on the back, and one in the top centre. Although this should mean excellent airflow, we were concerned about how much noise these might make. The case features open/close vents on the centre of either side panel as well, this is a curious addition as they seem pointless and spoil the clean look of the case a little, looking more like an afterthought.. 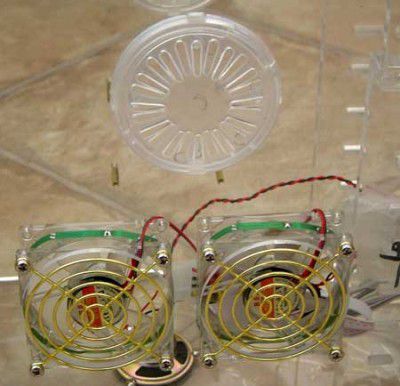 Both sides of the case featured a curious adjustable air vent​

Acrylic cases, in contrast to metal ones, often have no internal frame. This is helps to give the clean, open feel of the case, but unfortunately means the PSU (which sits above the motherboard) has no shelf and is supported entirely by the four screws that hold it in place. It would have been nice to see a small plastic lip above the backplane to help combat this problem. The fittings on the back of the case are not made of plastic, but of a brass coloured metal. As you can see, the top PCI slot has a hole in the middle, this is for the cables for the audio ports on the front of the case.

The fittings on the back of the case were metal​

Over-all build quality to the case was good, all screws and no glue joints. The plastic was nice and thick, although some of the screw mountings are obviously a little thinner. All this helps to give a fairly sturdy feel to the case. 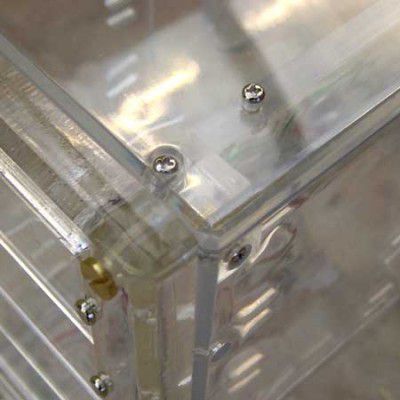 The build quality of the case was pleasing​
Installation

Installing the components was as straightforward as in most cases, and apart from needing longer screws (which were included) to fix some of the components to the thick plastic, the fittings were the same. As mentioned on the last page, we were a little concerned about the lack of a PSU shelf, as you can see from the picture, this lets the PSU sag a little over the motherboard. Although this looks a bit risky it felt secure and we found that using washers with the screws helped to spread the load and support the PSU better. 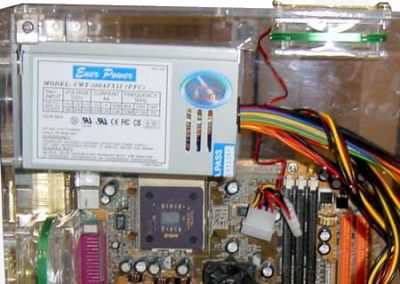 The PSU was a bit crooked without washers​
In total we had to remove (and replace) 24 screws from the case to fit our equipment, (PSU, HDD, Floppy Drive, CD Drive and Motherboard), because of this the installation took a little longer than a standard case, but was a breeze otherwise.

The fans that come with the case functioned well, they gave good overall airflow and aren't to loud, especially considering there are so many. The same could not be said for the vents we mentioned earlier though, opening and closing the vents gave no detectable increase in airflow or decrease in temperature. 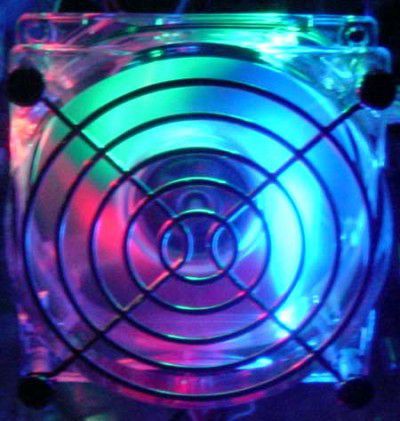 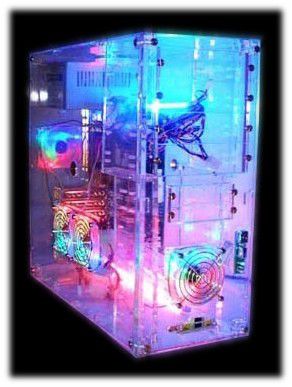 The case looked especially good in the dark​

Due to its faults, and the fact that it's largely pre-customised, this case isn't going to appeal to the more hard-core user or modder looking for a high quality case with all the latest trimmings. However for someone looking for something a little different for their PC and not wanting to spend too much money (or time) getting it, it's ideal (at the time of writing, the case costs £58.99).