In the past, the main emphasis on PC cooling has been largely on performance. The more CFM (air) a fan could push, the better, regardless of noise it made whilst doing so. For the non-overclocker at least, this performance-over-silence trend is gradually being reversed as people now increasingly work (and play) by their PCs, making silent operation far more desirable. 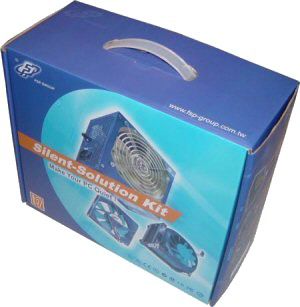 The specifications of the kit, according to the manufacturer, are as follows: 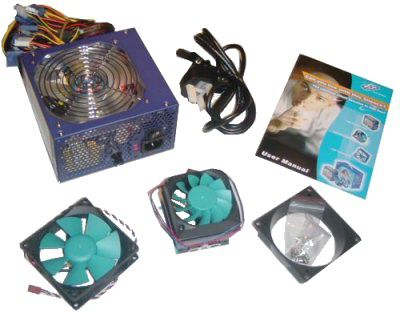 Box Contents​
The kit we received was for AMD (Socket 478 CPUs) and comes packaged in a blue box with a convenient carry handle. Opening it up revealed these well packaged components...
As you can see there are a few extras, it was nice to see some screws and a power cord in with the bundle, since most cheaper PSU/Fans don't come with any.

The manual, sporting a man who bears a striking resemblance to Dr. Evil, contains lots of technical details about the products, but is severely lacking in installation and usage instructions/diagrams. This may be hindering to a less experienced user fitting the kit, but as the products have standard fittings this shouldn't pose a problem to a more experienced user.

The bulk of the kit is made up by the PSU. Its a 350W model, which is fairly small in comparison to some of the more expensive models, but perfectly adequate for most systems, including our test machine. Its finished in a stylish metallic blue, which also acts as a durable "anti-corrosive coating" and gives it a much more expensive look. The PSU produced the most noise of any component in the kit when installed in our case, but compared to standard PSU's, it's very quiet indeed. This is thanks to the automatic and manual speed control on its clear 120mm fan, which works well, although reaching round the back of the case when you need it to be quieter/cooler is a bit of a pain. 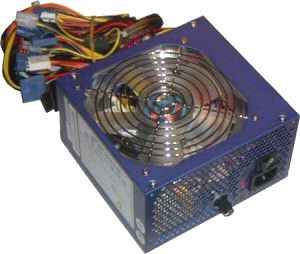 The PSU features plenty of connectors, a few too many perhaps as the cable bundle is huge and a little messy, including the standard ATX connector, a 12+ P4 type, 1 floppy disk drive type connector, 1 SATA connector which was a nice addition and 6 "Smart Housing" blue Molex connectors. This smart housing is simply a reshaped Molex body making it much easer to plug in to and remove the connectors from devices, they certainly did the job but for the amount of time the standard user would spend actually handling Molex connectors its hardly worth mentioning. 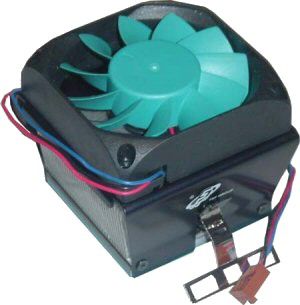 Although not a work of art, the CPU Cooler is certainly not a bad looking addition to a style-conscious case. It bears a 60mm temperature sensing fan, and a fairly regular heatsink. 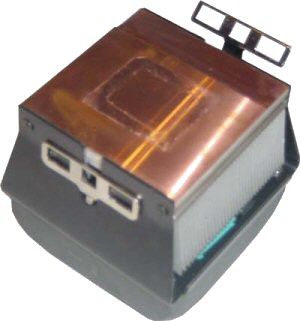 The separate copper base of the heatsink has been reasonably well finished, but would still benefit from a good lapping. 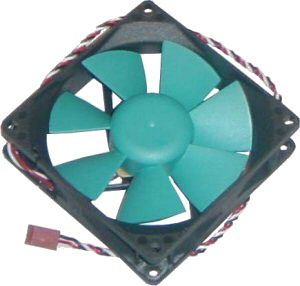 The 92mm system fan is temperature sensing, and if your case has fittings for 80mm fans FSP has thoughtfully included and adapter which should help you fit it in most cases. Its nothing special but matches the other components in its snappy black and turquoise style, completing the kit.

Installing the kit was a simple task, but the most fiddly bit was attaching the fan to the case via the fan size converter provided. The whole installation from removing the old components to installing the new ones from the kit took me less than 6 minutes.

The PSU is fitted in a standard case with the 120mm fan facing downwards, this has the side effect of drawing the hot air from around the processor out through the back of the machine. One aggravation with the PSU is the length of the wires, there are 3 Molex leads each with 2 standard connectors on them, I'm sure 2 branches of 3 connectors would have been a much better solution, particularly for people with non-standard or larger cases.


The HSF was simple to install after figuring out the non-standard, hinged clip, but the fact that the heatsink was so small compared to the other heatsinks we tested more than made up for this in convenience.​
A good tip we found for anyone installing the kit is to make sure that the fan is pulling the air out of your case over the temperature sensor (the small blue plastic component near the centre of the fan). This will ensure the fan's speed is adjusting in response to the temperature of the air in your case, rather than the air outside of it in your room.​
Performance​
First we tested the accuracy and stability of the PSUs power rails under idle and load conditions with our test machine comprising of 1 SATA HDD, 1 CDROM, 2 sticks of DDR RAM and an AMD 2100+ CPU. Extremely minor fluctuations in the voltage rails were seen during the tests, these were recorded and averaged to give the final results.

As you can see from the table, the PSUs voltages were fairly accurate and stable under high loads. As with most, the higher voltages were more inaccurate than the lower ones, and more badly affected by system load, but a shift of 0.1V is no cause for concern at all.​
Next we benchmarked the heatsink and fan in the kit against the Globalwin CAK4-88T performance temperature sensing HSF and the Speeze VultureSpin HSF, both claiming they fall into the "silent" category. We used the same system as above (AMD 2100+) with a Thermaltake CPU shim.​

As you can see, the more expensive VultureSpin just about beats the HSF, where as the CAK4-88T is markably better. Considering the price of the kit, the heatsink exceed our expections and although not the quietest heatsink in our test, it wasn't very noisy at all.​
Conclusion​
All in all, despite the kit's poor manual, short poor leads and slightly noisy operation (for a kit that claims to be "silent"), the Silent Solutions Kit is a well-priced solution for the average user looking for a quieter machine. Considering it is priced at around £60, all the parts have an expensive feel, particularly the PSU. Although not appealing to the power user, the kit performed admirably in all of our tests.