The ApeXtreme was launched at the Consumer Electronics Show in Las Vegas on the 9th of January, we take a first look at the new console/PC crossover.​
VIA have really been having a good year for product development, we've seen great advances in technology from their Embedded Platforms Division with a whole new range of impressive EPIA boards and various chipsets. We've heard word about their joint venture S3, presenting us with a new range of graphics GPU's, the Deltachrome. They've even announced a partner for production of sub .9 nm processors. Now, continuing on from that product development role we're seeing the ApeXtreme, the result of a partnership between VIA, S3 Graphics, and the little heard of Apex Digital Inc.​
The ApeXtreme, is not in fact a snowboarding robotic primate, but a PC/Console crossover based on VIA technology, which Apex hope will be sitting under our TV's acting as a full HTPC and gaming system. The system is using a custom designed "Glory Platform" motherboard based around the VIA 1.4GHz C3 processor and various VIA chips, including the CN400 media chipset. It will be furnished with 256MB of RAM and a 20Gb hard drive, running an embedded version of Windows XP, promising fast boot ups, user friendly operation, and blue screens of death in glorious wide-screen and 6.1 channel surround sound. The unit is also Linux compatible though, although whether most of its users will be is another matter entirely. A tray-load combo CD/DVD drive features on the front of the unit, along with the four USB 2.0 ports, allowing playback of DVD's and VCD's. 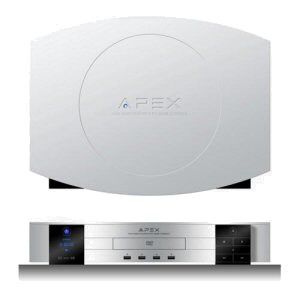 Perhaps the most promising feature of the ApeXtreme though is the graphics GPU, the S3 DeltaChrome which has 8 pixel and 4 vertex shader pipelines, along with at least 64MB of video memory, giving peak fill rates of 2.4Giga Pixels, and 1.2 Giga Vertex shader instructions per second. In English, that means that the graphics GPU is easily comparable to the performance of a mid-high end graphics cards for a PC, and will fulfil DirectX standards. The S3 Deltachrome CPU also supports HiDef TV out-put, which the US users will be pleased of as it will allow much higher resolutions on their TV. However us Brits haven't seen HDTV take off yet, except in some projectors, so it may be a while before we can take advantage of this. The inclusion of such a high capacity graphics engine is a little curious, as with such a comparatively weak processor of only 1.4GHz, you're not going exactly going to be able to push the envelope with the latest heavily-graphic games, although the fact that a TV can only display resolutions of less than 640x480 should mean you wont be straining the system with high resolutions at least.​
Personally we're pretty excited about this. More and more we see the game industry target the console market, leaving us PC users with heavily dumbed-down console-ports, perhaps the ApeXtreme will help reverse this trend. But will it take off? That is down to the price, which has been announced as $299 (~£200) for the basic model and $399 for the beefier version, although the difference between them, which works out at about £65, is not exactly clear.