As I write this review I am using the new wireless, battery-free, optical mouse from A4-Tech (the very same company that produced the anti-RSI keyboard that was recently reviewed). Most of their kit seems to be pitched on the basis of some little gimmick and this mouse is no different – it needs no battery! Hey! Wow! Sounds real cool doesn't it? Well it's more gimmick than magic, so don't rush to buy one until you've read the following review. 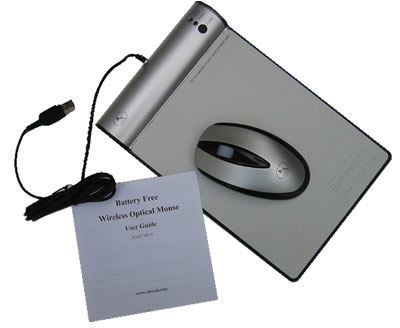 Nothing special needed. It should work with just about anything with a USB port, and a Windows® operating system from Me onwards. You won't even need a CD drive as it doesn't come with drivers – it's pure plug-and-play (unless you're a Mac user in which case you'll have to download drivers from www.a4tech.com and you should be running Mac OS 8.5 or later).

It's strangely comforting that the only things in the box are the mouse, it's special mouse pad (more on that soon) and a small leaflet that provides some essential guidance on things like how to plug a USB device in, and where and when the mouse won't work properly. This minimalist package confirms that you're not going to be faced with a complex installation procedure and your mum can probably provide all the technical support you'll ever need.

The battery-free mouse comes in two flavours: the NV30 and the NV50 (this review sample is the NV30). It has two buttons and a scroll-wheel/third button. The NV50 is its 5-button big sister. (Who knows, there may be an NV70 out there with more knobs to tweak, or even an NV90 that requires the use of both hands to operate it). On the NV30 that I'm using, the two main buttons, like many mice these days, are simply extensions of the palm grip area. The central wheel is wider than most, and the chassis is framed in an opaque plastic that allows the body to glow red when in use. Lack of a battery makes it very light indeed and this allows good control with just the slightest move of the fingers. 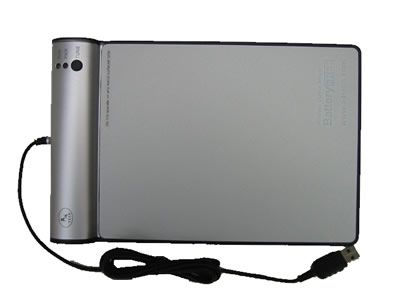 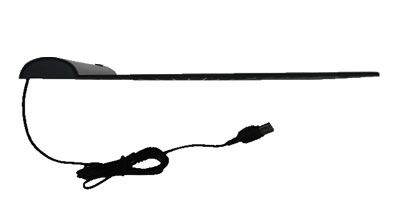 Now for the explanation of the wireless and battery-free gimmick and this should be fun, because you can do this at home! First, consider a standard wired USB optical mouse. Next, take a big knife to this imaginary mouse and cut out all the USB connectivity bits. Then stick all those into a small but shiny mouse pad. What you end up with is a USB mouse mat and a wireless mouse. The mouse draws all its power from the pad through the magic of electromagnetic induction. As long as the mouse is kept in close proximity to the pad, it should work. This is , essentially what A4-Tech have done, and by just focusing on the mouse and ignoring the fact that you have to use its special pad with it, they can say that it's the world's first wireless battery-free input device. Clever eh?

So you still have the hassle of a wire and the need for a USB socket, and your mouse is restricted by the size of the pad. Couldn't you just call any old USB optical mouse ‘battery-free' and have even less clutter on your desk?

Now I can sound a little friendlier towards this rodent. Straight out of the box, and without reading any instructions, I plugged the mouse pad's USB connector into my notebook, put the mouse on it and pressed the little black button at the top of the pad that was clearly marked ‘Tune'. The mouse lit up in a rather striking red that set off its admittedly simple but slick design very nicely. (The usual screen message about a new USB device being recognised had appeared in the meantime, of course). I gave the mouse a few experimental twitches, shoves and shakes and, hey presto, it worked like a charm. Yes, it's still me – the cynic – writing this, but I have to admit I started to like this piece of kit very quickly.

The mouse itself is very light, and its movement over the pad surface is excellent, almost frictionless. You might even improve this by adding Teflon skates but personally I don't think it's necessary. Only a longer-term test would determine if the mouse pad would eventually wear and weaken its highly polished initial performance.

There is also something to be said of having freedom from a wire attached to the mouse itself, though the scope of movement is limited by the small size of the pad. I'm using the mouse in a notebook PC as I type this, and I do prefer it to my wireless notebook mouse. First, most notebook mice are tiny and not really designed for intensive use. Second, I forever have to retune the connection with the USB dongle. Oh, and third…yes…I do have to consider battery replacement.

An alternative is a little Kingston mouse that I have which has a USB connector and its wire sneakily concealed in a little flip-open compartment. No batteries, compact but not too small, and optical flexibility. Anyhow, that's the kind of competition that the A4-Tech mouse has to stack up against, and even though that competition is tough, I'd be perfectly happy to slap the battery-free mouse and its pad into my laptop case – even together they are very light. While pads are not really essential with optical mice, most people I know still prefer to use one, so in that context, this new combination starts to look even better. 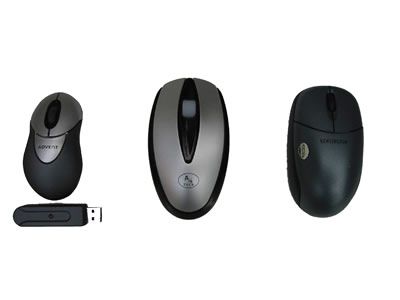 I couldn't find out what the mouse's optical resolution was, but it's clearly not intended as a gaming device. The size of the pad alone restricts its use in that area, and from even basic movement tests it was clearly not going to perform well in a major online fragfest. It may do fine for the casual gamer, though – someone who's not into shooters.

The mouse comes with a warning that it probably will not work well when the pad is placed directly on a metal surface (so anyone who's splashed out a couple of grand for one of those very expensive Lian-Li aluminium computer desks should steer clear of this mouse!). You can stick a book under the pad if you have to though to shield it from any metal surface. Also, you are told not to put the pad to close to your monitor, speakers or other electronic stuff you have lying around on your desk.

Whilst I remain cynical about the ‘wireless' claim, I do like this mouse/pad combo and it's certainly not massively overpriced at around £15 in the UK and $30-35 in the US. It's definitely worth a look for those using standard apps and basic games. A4-Tech is one of those companies that do seem to try and innovate and I for one think that should be applauded. With this mouse, they have a good product at a fair price and even though they sell it as a mouse, when it would be more accurately pitched as a mouse/pad combo, I don't think they're really out to trick people. It just means their marketing is innovative too. 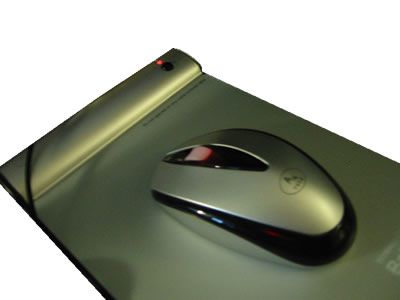