Since LGA1366 launched at the end of 2008, there are not many news in the market recently.
Instead the new LGA1156 has very high exposure rate in all medias.
These 2 structures are very similar and make users hard to choose as the different strength.

LGA 1366, the extreme level product line and will have 6 cores CPU soon.
Currently X58 chipset support 3 channel and 6 DIMMs DDR3 for higher extensibility and Quad core CPU with HT technology.
LGA 1156 is the following segment. P55 is single chip and the power consumption is lower.
HT version CPU and LGA 1136 are similar price. i5-750 is the most valuable choice so far.
In the future, i3 dual-core will make LGA 1156 product line be richer, but still only the combination of dual-core, quad-core and HT.

Even though there are not many news of X58 MB, but itfs still the top end product in Intel platform.
USB3.0 and SATA3 are launched in these 2 months, and most manufacturers implement with P55 MB.
Compared to X58 revision, there is only GIGABYTE X58A-UD7.
GIGABYTE X58A-UD7 is the key role for this review.
Letfs look at the appearance first.

Upper Left Corner
LGA 1366 CPU socket, and CPU metal cover is electroplated.
X58A-UD7 uses 24 phase PWM. Itfs same as own P55-UD6 design and the highest in X58 board in the market now.

The shortcoming is lose one PCI-E X1 after installation

USB 3.0 chip is NEC D720200F1
3x USB power design to provide 3 times electric current by independent chip for all USB ports.
It can solve the insufficient power issue which may cause read write lose as using external storages.
I will test USB 3.0 performance later.

Below SB heat sink is Marvell SE9128 chip which supports SATA3
SATA3 ports is SATA6 and SATA7 in upper side.

Advanced CPU Features
C1E is power saving and lower frequency feature. It runs automatically as low CPU utility rate.
Intel Turbo Boost is opposite with C1E. It will increase clock in full speed operation.
You can find many articles in internet.
Because of the limited space, also I had detail review in previous product, so I won’t explain Intel Turbo Boost

X58A-UD7 is GIGABYTE most high end product. The voltage and items in BIOS are rich
The setting is stable at 175/2100. If your hardware OC capability is good, you can refer to this set up.
I hope it is valuable for your configuration.

GIGABYTE “A” version means supporting SATA3 and USB 3.0 technologies
First, let’s see the difference of SATA3.
This time I use Seagate latest Barracuda XT.
It supports SATA3 and backward compatible with SATA2

As the test in SATA2 and SATA3, the performance is not big different in normal application.
After all, SATA2 bandwidth is 3Gbps, means 300MB/s and SATA6 is 6Gbps, 600MB/s
This spec is for max bandwidth, especially for multi-HDD RAID5 or SSD RAID0.
SATA3 will bring the max bandwidth into full play in such conditions.

Formerly, USB 2.0 max bandwidth is around 30~35 MB/s. It’s fatal wound for USB devices.
FLASH mostly is MLC, is very hard to reach 30 MB/s.
However for users who using 2.5/3.5” USB external box, HDD performance is above 50 MB/s~100 Mb/s
USB 2.0 bandwidth will limit the products performance.
This issue will be solved soon as more and more USB3.0 MB.
Ad

DDR3 OC can reach 2100 CL8 easily and only need 1.600V
Besides DOMINATOR-GT CMG6GX3M3A2000C8 quality is great, the X58A-UD7 OC capability is also in good standard.
It makes the combination be even greater.
Comparing to P55 dual channel performance, X58 3-channel bandwidth is much higher.


The CPU is Gulftown, 6 cores and HT technology work as 12
Itfs not selling in the market yet, but there are many CPU test since August.
CPU OC to 4GHz to see some future structure performance

During the test, you can see many software only support 4-8 cores.
In physical 6 cores plus HT, some benchmark scores decreased rather than increased.
I think the software need to improve more in this condition.
SLI 3WAY is also the same. CrystalMark 2004R3 scores is decreased.
So far, some software cannot support this high spec 100%.
However, Gulftown with SLI 3WAY really get the higher benchmark scores.

Weak
1.Hybird SILENT-PIPE will block one PCI-E X1
2.LAN and Audio chips are all Realtek. They could consider for some better one. 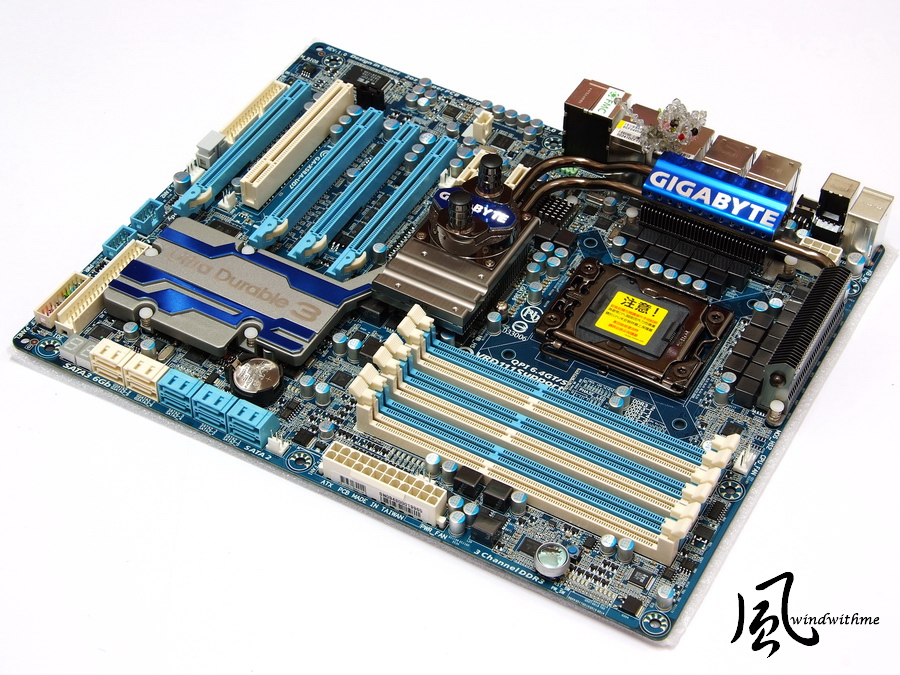 GIGABYTE X58A-UD7 is really the new blood for X58 platform
Except enhance the components, it also implements latest USB 3.0 and SATA3
LGA 1156 doesnft sell well because i7 CPU plus P55 price is almost the same as LGA 1366
After LGA 1156 i3 CPU launch, the platform should be cheaper and rise the C/P value.
For the current market, LGA 1366 is still the most high end one.

The most attractive part is USB 3.0. USB2.0 has been using for years.
30~35 MB/s bandwidth is too slow for most USB external storage users.
USB 3.0 can reach 150 MB/s in test which is almost 5 times faster.
This technology is more practical.

GIGABYTE announced GIGABYTE X58A-UD7 is high standard in overall performance.
Previous GIGABYTE X58 series can support Gulftown 6 cores CPU by upgrading BIOS.
Itfs a pity that LAN and Audio can use better chip to match their high end components level.
If you want to build a top level PC, LGA 1366 is your best choice.
For top MB, X58 price is higher, but compare to the same price range X58 products, UD7 is still competitive.