The release of Stronghold back in 2001 introduced us to a unique concept for a strategy game. Here we had a castle building simulation coupled with some RTS combat. You were capable of completely building up your castle while laying siege to those who opposed you through some large-scale battles. Although Stronghold did have its fair share of bugs and nuisances, it was still a title that brought some interesting gameplay mechanics that we haven't seen in a strategy game since its release. A sequel was sure to follow, and that's what we finally have today. Stronghold 2 builds upon its predecessor with new gameplay modes and full 3D graphics, but it's still plagued with the same issues that surrounded the original game.​ 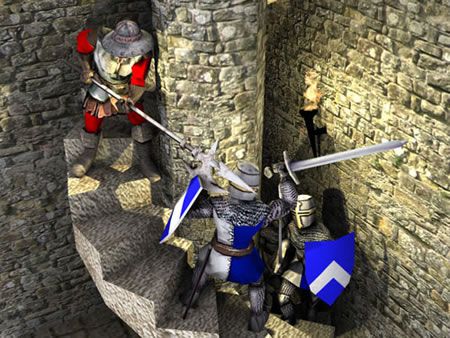 The Stronghold 2 story settles around the unfortunate events of the King. After the King's armies are defeated, he flees and attempts to rule his country from a secret location. Powerful barons are now fighting over the lands of the disintegrating kingdom. It's now up to you to unite the land under the King and settle all matters. The story really isn't very deep or interesting and is probably one of the weakest points of the whole game. Fortunately, Stronghold 2 does make up for this flaw with improved gameplay.

A basic campaign in Stronghold 2 goes something like this. You create a castle, build up an army and feed your disloyal peasants, and sit there as your masterful creation becomes a pile of ruble at the hands of enemy forces. Well, it's kind of more complicated than that, but that's the basic idea behind everything. The gameplay happens over a number of different game modes. This is one of the best feature of the entire game as these game modes provide for high replayability and hours of countless building. 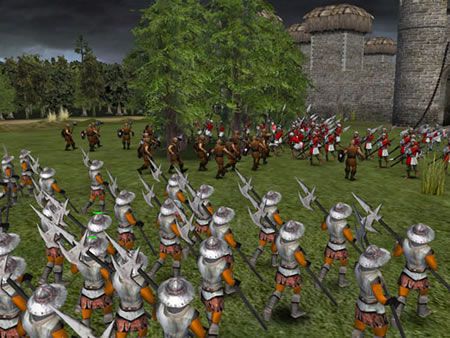 There are two main game modes to choose from as far as single-player goes, which are 'The Path of Peace' and 'The Path of War'. Both modes vary greatly from each other. Choosing the peaceful path will mean that you can just relax and build the castle of your dreams. Watch as the little children play in the fields and as your meager peasants are at your every beck and call. Choosing the war-filled path means that you not only build up a castle, but you also get to lay siege to other castles in all-out battles. Obviously both modes provide for somewhat different gameplay that should appeal to those people who like an easier gentle game and for those who just want to see dead bodies.

Underneath each of these two modes are even more diverse modes to choose from. When on the path of peace you can choose from the campaign, free build, or custom maps. The campaign allows you to play a number of missions that tie in with the storyline of the game. Basically the campaign has you rebuilding the King's county. You're given different objectives such as building certain structures and collecting a number of different items. Harder tasks include providing food for both your village an a neighbouring village. Better make sure there are enough apples to go around. Hey, at least you don't have to worry about any invading armies.

The free build mode is exactly what it sounds like. You can choose from different maps to build your very own kingdom. It's a nice way to peacefully build your own castle as you so desire without the interruption of war. For the most part it's a lot like the campaign, except you don't have any real objectives. The final mode is the custom map mode. This is where you can load up your custom maps that you may have created in the custom map editor included in the game. The editor is very easy to use as you can simply drag and drop items wherever you want. You can also easily shape the map anyway you want. All of your maps are then saved for playing later. 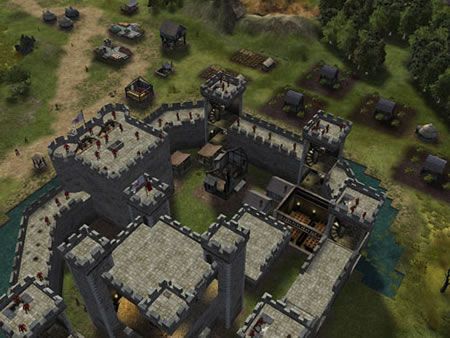 The war path also has its own share of gameplay modes to choose from. These modes include campaign, kingmaker, siege and custom. The campaign for the war path also follows the storyline but in a more direct and war-like way. You will mainly find yourself fighting off many enemies, with a mix of castle building added to help out the locals. The kingmaker mode allows you to fight for all of the land. You can choose which map to use and where you and your opponents will start out. You must then build up your castle while defending and attacking the enemy. The victory goes to the one that takes over the entire map. Their is also a custom mode here which basically allows you to play user-created campaigns with select objectives.

The final mode is the siege mode which allows you to choose a specific map and whether or not you are defending or attacking the castle. This is probably one of the weaker points of the entire game, and the overall RTS combat system just doesn't feel right here. First off, there really is no strategy to it. Just simply click a squad of guys and tell them to barge head on into a group of enemy soldiers and see who come out on top as the victor. Depending on whether or not your soldiers are wearing armor they can withstand a lot of hits from a diverse amount of weapons. In fact, it would seem as if wooden walls that surround some of the castles are even weaker than the soldier's armor. When enemy soldiers attack castles with wooden walls they'll knock down the walls like they were chopping down trees. They simply just stand there and repeatedly hit the wall which comes crashing down after only a few hits. They will then constantly hit your entire wall until you have no walls left and will disregard your soldiers until they are done. Furthermore soldiers tend to bunch up and completely walk through each other. All of which is the obvious result of poor AI. 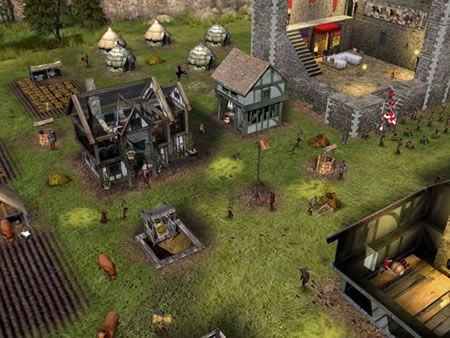 The aspect of building a castle is the stronger piece of gameplay here. You start out with a small castle-like building that serves as the center headquarters. This is where the lordship resides. From here you have to start building up the surrounding area with different buildings that all have different tasks. Normally you start with up to eight peasants who will gather around a campfire waiting for a new job. You can then add more peasants later by building hovels which are homes for your peasants. The more peasants you have, the more jobs you'll need to supply them with, and the more mouths you'll need to feed. That's why you have a popularity and honour meter. You can gain more popularity by lowering taxes or by doubling the rations that your peasants may eat each month. If you're popularity drops too far, peasants will start to leave. Public executions are usually a surefire way to keep your peasants in line. You can also gain honour by holding special banquets and events which then allows you to buy more land and recruit better-equipped soldiers from the barracks building.

It's really very interesting to see how each building interacts with each other, as each one plays a specific role that's vital to the whole kingdom. For example, you must buy a granary to hold the food and a stockpile to hold other supplies such as wood and bricks. How do these items get into these buildings? Well creating saw pits will have your peasants chopping down trees, making wood, and delivering them right to the stockpile. A stone quarry acts the same way giving you stone to work with. But the only way the heavy stones can make it to the stockpile is to build an ox tether which will carry the stones. The wood and stones can then be used to create more structures such as a variety of different walls and gates or simply more buildings. Other such buildings include fruit and vegetable farms for the granary, weaver workshops for selling materials, and an armory for storing the weapons that your blacksmith produces. There really is a large variety of buildings here that all have their own unique contributions to the society.

Even though the strategic combat portion of the game really isn't that strategic (we took over an enemy castle even when they outnumbered us and still had soldiers alive) there still is some strategy left in here. The strategy can get quite deep when you're managing your village especially if you have to take care of a neighboring village at the same time. Their are plenty of statistics and options to choose from, and thankfully it ceases to become dull. With all the gameplay choices to make, it's also very easy to pick up and play right away. 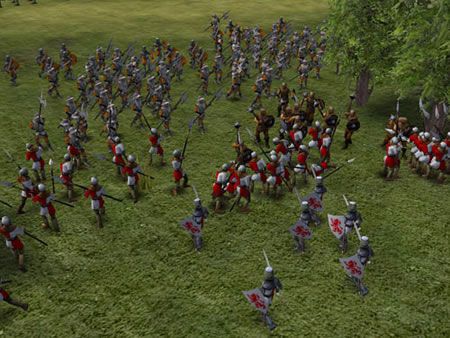 ​
The final way to experience this medieval strategy game is by use of the multiplayer. At time of review it was rather difficult to find anyone online, but the multiplayer does seem promising. It works in exactly same way as the kingmaker mode in single-player except now you can have up to eight players dishing out the carnage. Although it may be advisable to play against real humans rather than the weak AI that infests the single-player portion of the game.

As far as visuals go, Stronghold 2 looks fantastic. Realistic shadows and detailed textures are the key here. The environments are also detailed nicely letting you checkout the local wildlife, and it really does feel like a medieval setting. Animations are also nicely done with all of the peasants being individually animated as they work in their specified buildings. It's always fun to watch them work. You can also switch to a view which allows you to get close up and personal in the main room of the castle, showing you all of the inner work. The sound, on the other hand, isn't as pleasant with some over-the-top voice acting and a few poor sound effects. 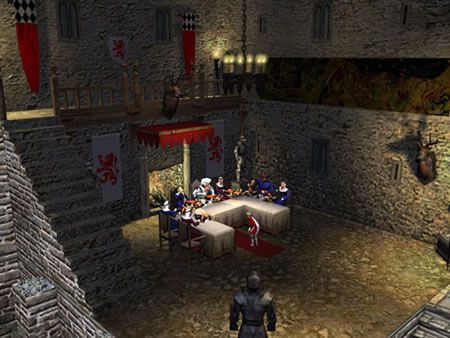 Overall, Stronghold 2 accomplishes most of what it was setout to do. It takes the concept of a castle sim and combines it with RTS combat. However, you'll find that the castle sim part is the most enjoyable aspect of the game as the RTS combat is very lackluster, with the AI not making things any better. You still can spend hours with the building options available to you, and it's always a joy to compete online to see who can build a productive castle the fastest and then attack each other. Fortunately there is still some strategy left within the building modes, and it should be enough for strategy and sim fans alike to at least take a go at this title. There's a lot of gameplay and potential here. You just have to find your way around the unpolished points of the game in order to get to it.