The way that people watch TV is changing. Gone are the days of needing to pay strict attention to the TV schedule; nowadays you can make your own schedule that consists of just the programs and films that you choose to watch, whenever you want to watch them.

Subscription Video on Demand (SVOD) services are just the latest development in the evolution of TV viewing. As new technology has come along, the way in which we watch TV shows and films has constantly changed – from VCRs to video rental to digital recording devices (such as Sky) to internet streaming services – all have had an impact on our viewing habits, and it will be interesting to see where technology will take us next.

TV and film streaming services have become very popular options, and today we will be looking at three of the biggest providers in the UK – Netflix, Amazon Prime Instant Video (which will be referred to as simply ‘Amazon’ in this article), and Now TV (from Sky). Read on to find out how they compare.

​
Netflix holds the biggest market share for TV/Film streaming in the UK. The monthly subscription starts at £5.99 per month – at this price you only get standard definition (SD) and you can only watch it on one device at a time. The premium subscription is £8.99 per month, and for that you get 1080p high definition (HD), Ultra HD (UHD) and you can stream on up to four separate devices at the same time. In terms of sound quality, 5.1 surround sound is available but it depends on what you are watching (in our experience, it is unusual to find content that isn’t available in 5.1).

Netflix has the broadest range of available titles – far more than Amazon or Now TV. There are currently over 3,000 titles available in the UK, and over 15,000 titles worldwide. In terms of the device you will need, you can stream from Netflix over a broad range of devices; Smart TVs, games consoles, Blu-ray players, Apple devices, Android devices, Windows devices, and of course a computer. However it is worth noting that the device you choose may impact the quality of your viewing – for example, UHD streaming is not available via the PlayStation 4 or Xbox One.

What is Netflix’s unique selling point? Probably their exclusive content, and the fact that there are absolutely no extra charges. If you pay the subscription, even the most basic one, then the full UK catalogue is available to you to watch. Furthermore, with top-rated series such as ‘House of Cards’, ‘Orange is the New Black’ and ‘Marvel’s Jessica Jones’, Netflix has established themselves not just as the deliverer, but the creator of excellent content. Lack of adverts is certainly a bonus, but you get that with Amazon too.

The area where Netflix falls behind other services is when it comes to newly released content. You won’t often get new releases, so you have to wait a while before series / films become available. That being said, the range of films and series available is excellent.

If you want to give Netflix a try, then you can opt for a free trial which lasts for one month.

There are currently over 1,300 films and over 550 TV shows available to watch for free, and a further 17,000 films and nearly 7,000 TV series available for an extra fee – either rent or buy. However, this can be very costly depending on what you want to watch, and the option to rent is not always available, meaning that the only way to watch is by buying the content. For example, ‘Star Wars: The Force Awakens’ is currently only available to buy, and the price is only marginally cheaper than having the Blu-ray sent to you. However, despite being costly, this does grant subscribers access to newly released titles – which is an area where Netflix is lacking.

As with Netflix, there are no adverts during video streaming.

In terms of the recommended internet connection speed, you will need at least 0.9MB/s for SD content and 3.5MB/s for HD – which is lower than the recommended minimums given by Netflix. You can stream from Amazon on their products (Fire TV, Fire TV stick etc) and on most tablets, phones, Smart TVs, game consoles and computers.

What is Amazon’s unique selling point? You can download content and watch it offline. This is something that neither Netflix nor Now TV offer. However, you can only download content if you are using either a Fire device (table or phone), an iOS device or an Android device. In terms of exclusive content, titles such as ‘The Man in the High Castle’, ‘Mr Robot’, and ‘Transparent’ have all received excellent reviews, and there are a range of other original series available. Plus there is the upcoming new car show featuring the former presenters of Top Gear, which should have its debut later this year.

​
Finally, we come to Now TV, which is the streaming service provided by Sky. There are three services available depending on what you want to watch: Movies, Entertainment (ie TV shows), or Sports. None of these packages give you Full HD or 5.1 audio, and there are additional charges if you want to watch certain content. Sky recommends that you have a minimum connection speed of 2.5MB/s for streaming.

Now TV is available on a variety of devices, which is similar to both Netflix. You can also get a Now TV box which comes with its own remote control. It cannot be used to store files or to surf the internet, but there are apps which you can download in order to watch other content – for example, BBC iPlayer and YouTube. Although Now TV can be used on a wide variety of devices, you are restricted to how many devices you can link to your account: You can register up to four devices and stream on up to two devices at the same time.

Now TV features small adverts, which can be a little annoying. The adverts are only around 10 seconds long, and they are Sky adverts, but it can really disrupt the immersion. Given that there are no adverts with either Netflix or Amazon, this is a big disadvantage of going with Now TV.

The Movies package costs £9.99 per month and gives you over 1,000 movies plus up to 16 film premiers per month. The Entertainment package costs £6.99 and gives you access to over 250 boxsets plus 13 Sky entertainment channels – including Sky Atlantic and Sky 1. The Sports package costs £6.99 for a day, £10.99 for a week, or £31.99 for a month, and whichever option you go for gives you access to seven live Sky sports channels. It is worth noting that these prices are the maximum you will pay – there are usually offers available if you want to have more than one package, or if you sign up for a longer period of time.

The big factor that Now TV has going for it is that if you don’t have Sky it’s the only place you can watch Sky exclusives – for example, Game of Thrones. For anyone wanting to keep up to date with the latest episodes without having to pay for a (more expensive) Sky subscription, Now TV is certainly a good option. In fact, the newness of its content is certainly where Now TV excels. However this content is only available for a limited time after the original airs on Sky, so you have to make sure you watch it before it disappears.

If you are interested in trying out Now TV you can have a free 14 day trial for both the Movies and Entertainment subscriptions. However, a free trial is not available for the Sports package, but you can pay £6.99 for a day pass if you don’t want to sign up for a longer period.

Netflix, Amazon and Now TV all require a subscription, which can be cancelled at any time. All three have parental controls available.

Whilst all of the streaming services examined here have some very good features, for most consumers they are not regarded as stand-alone products. Instead they are used more as an additional source of content on top of, say, a satellite or cable TV subscription.

The quality of content you get depends on the service you go for and the device(s) you are using, but the most important factor is having a good internet connection. If your download speed is insufficient, then you can expect lengthy buffering and delays.

The streaming services we have looked at are all different, and have various advantages and disadvantages. The choice of which one to go for depends largely on personal taste – i.e. what you want to watch. That being said, Netflix has proven to be the most popular streaming service in the UK, with Amazon and Now TV lagging far behind.

Personally, I have not been impressed with Now TV, and I find that the only benefit it brings that I really value is the ability to watch Sky exclusive content (such as Game of Thrones). Even then, it is frustrating that you cannot stream in HD and 5.1 surround sound. I have an Amazon Prime subscription, but I do not find myself using Amazon Prime Instant Video very often. Amazon does have some very good exclusive content (‘The Man in the High Castle’ and ‘Mr Robot’ were both excellent) but the rest of the selection available to watch for free is relatively poor. Netflix seems to be a good all-rounder, giving a nice balance of excellent exclusive content, and a wide selection of other titles. 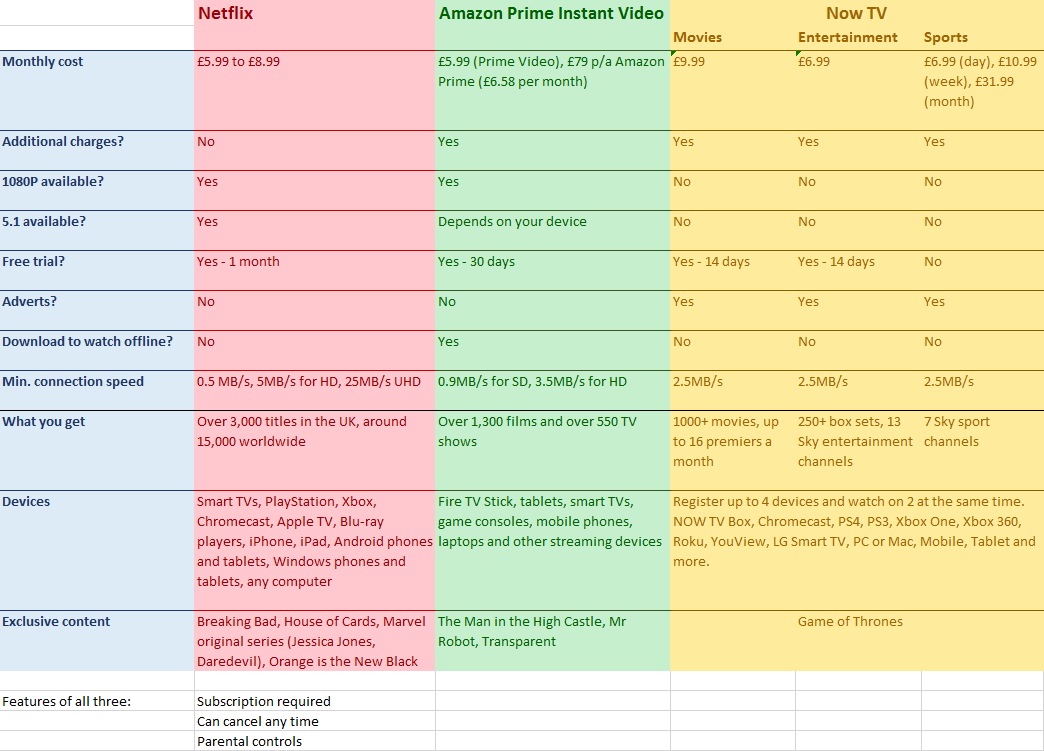