We’ve tested the previous 2 versions of Kaspersky Internet Security and have been consistently impressed with the functionality and performance of the all-in-one security suite. KIS 2010 has recently been released and it has undergone a facelift as well as a few subtle changes. The core feature set is the same, with a highly rated anti-virus engine and firewall (along with other components such as anti-spam, parental controls, and a few other tools). 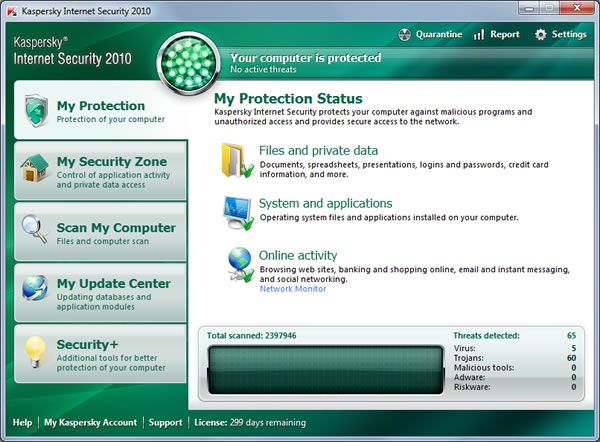 Not all of the interface changes have been an improvement over the previous version, as the firewall controls have become more difficult to adjust in some respects. Although it is highly configurable, it isn’t as intuitive to view and change individual application firewall settings. The layout seems to have been designed to make things easy for novices, but ironically this has made configuration more difficult for advanced users. A dual display mode may be a better option for future versions of KIS.

The anti-virus component continues to do well via in-depth testing from the likes of VirusBulletin and AV-Comparatives, and consistently appears in the top tier of anti-virus software in terms of detection. This is one of the most important features of the application, as a poor performing on-demand virus scanner is almost worthless. After using KIS 2010 for over a month, there have been several instances where webpages have been prevented from loading due to a hidden exploit (often Java, PDF or SWF based). Without a pro-active anti-virus package, it is possible that these exploits could have caused some damage via un-patched software. Many e-mail attachment viruses have also been caught, and although they were unlikely to be opened anyway, it is reassuring to have such e-mails deleted on sight.

A new “safe run” mode has been added, which allows you to run suspicious applications within a sandbox mode – to an extent, isolating them from doing any damage to your system. This is a very welcome addition, and it works well under Windows Vista. However, trying this in Windows 7 resulted in an error no matter which application was launched. Although Windows 7 isn’t generally available yet, it has been RTM for some time. I would assume this problem will be fixed upon the full Windows 7 release.

A sensible number of user interaction and information popups are presented, allowing you to choose the course of action manually for each new application you run on your PC. You are able to select a non-verbose mode during setup if you want Kaspersky to take its best guess on how trusted certain software is. A combination of heuristics and a central database is used to place each application in to a Trusted, Low Restricted, High Restricted or Untrusted category – limiting resources based on risk. 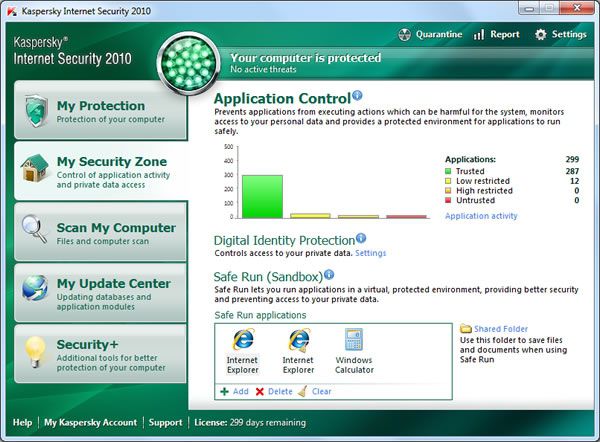 ​
It was pleasing to see that Kaspersky have continued to bundle a powerful vulnerability scanner with KIS, as this allows users to perform some pro-active security hardening on a regular basis. The importance of this tool should not be underestimated, as it will detect applications with un-patched security problems and provide information on how to fix each one. General system vulnerabilities are also listed, which make sensible suggestions for the security conscious. 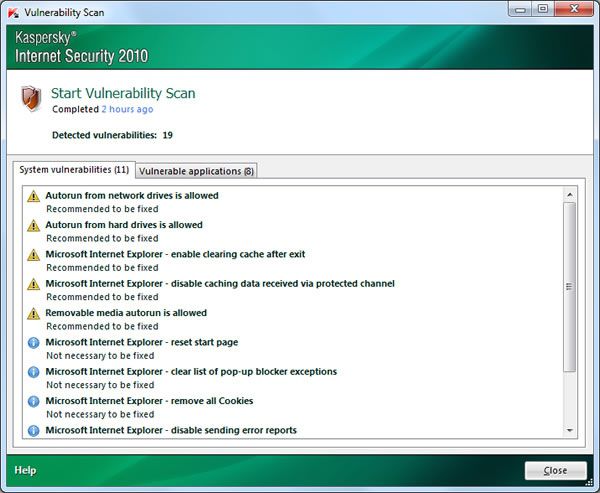 ​
Anti-spam detection has improved somewhat in this version and it would be suitable enough for most home users. Once trained, the KIS spam filter works well in Outlook and Thunderbird – the most common e-mail clients. The parental controls are still rudimentary, but work acceptably well for an all-in-one package. Combined, these extra components provide a very useful array of utilities.

Kaspersky Internet Security 2010 is another solid all-in-one home security package, performing very well in its anti-virus and firewall duties. The other components varied in terms of effectiveness and customising the application can be confusing, but this shouldn’t detract from a product that offers very good protection and value for money (a 3 user license costs as little as £25 at Amazon at the time of publishing). Everything you need for a powerful security suite is included, and the resource usage on a standard home PC was reasonably low when compared to similar software.