The European Commission (EC) has fined Google a record €4.34 billion ($5 billion USD) for anti-competitive practices, which represents the largest fine ever levied by a regulator against a single entity. Google is accused of forcing their own products and services through their Android operating system, which is illegal under antitrust rules.

It is not illegal for companies to dominate a market, but, as Uncle Ben told Peter Parker, "with great power comes great responsibility". Competition is good for consumers - it forces companies to be innovative, to develop new and better technology, and also encourages lower prices for products and services. When there is no competition in a market - ie one company has a monopoly - this is often bad for consumers, and so antitrust laws exist to prevent this from happening. The rules aim to remove barriers to entry, and encourage fair competition.

​
Google has been accused of three main offences;

If Google fails to cease the illegal activity within 90 days, they will face additional penalties of up to 5% of their average daily turnover.

The majority of Google's income is generated from their search engine, so by pushing their own products they are further cementing their position as the market leader. Given that 80% of mobile devices worldwide run on Android, this could have significant consequences.

According to Commissioner Margrethe Vestager, who is in charge of competition policy, "Today, mobile internet makes up more than half of global internet traffic. It has changed the lives of millions of Europeans. Our case is about three types of restrictions that Google has imposed on Android device manufacturers and network operators to ensure that traffic on Android devices goes to the Google search engine. In this way, Google has used Android as a vehicle to cement the dominance of its search engine. These practices have denied rivals the chance to innovate and compete on the merits. They have denied European consumers the benefits of effective competition in the important mobile sphere. This is illegal under EU antitrust rules."

Google has confirmed via Twitter that they will be appealing against the decision. 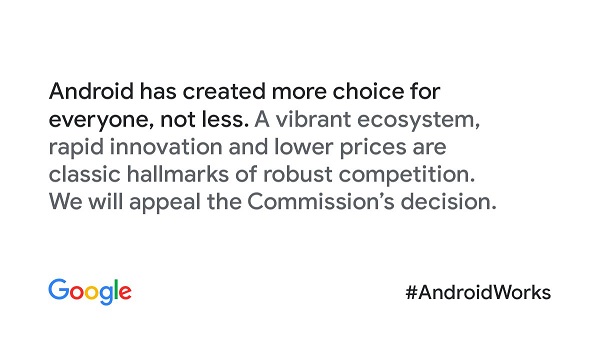