Anytime Activision publishes a new action title based upon a superhero comic we can't help but think about last years train wreck that was Spider-Man 2. You may recall how PC gamers received a different version of Activision's Spider-Man 2: It wasn't the interesting and free-roaming version that console players could enjoy. Instead it was a completely different child-like version that could be beaten in less than 4 hours, giving no incentive to go back through it all again. As you could imagine, there were plenty of disgruntled PC gamers, and the game was so bad that it won our Worst Game of the Year award of 2004.

So we were a little cautious going into this one, but it came as a pleasant surprise that Fantastic 4 hasn't changed at all. It is the exact same version as the consoles (which could still be a bad thing). As we have learned many times over and over again; games ported to the PC can be rather tricky. Usually, a ported game can be just as good as any other PC game when there's a lot of extra time put into to optimize it for PC gamers. The occasional extra content is usually a nice bonus too. Unfortunately the majority of ported games are rushed out to be released along side the console version giving us either an extremely buggy title, or a mildly ok game that has too many characteristics in common with a console game. Fantastic 4 tends to fall into the latter scenario, as there are many areas of the game that will make you forget that you are playing a PC game. 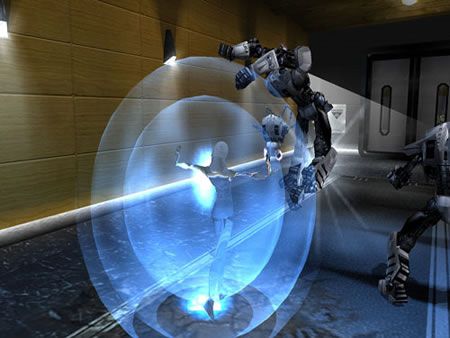 In other words, it really doesn't look like many things have been changed to make the transition over to the PC, especially regarding the game's interface. For example, the menus in the game contain green "select" buttons and red "back" buttons signifying Xbox controls. The game also can't be saved at anytime. Instead you can only save the game between levels. Which means that if you get far within a level and die you have to start the whole thing over again. Fortunately the levels are relatively short and can be beaten quickly. The game also gives you a number of lives, so when you die you actually come back right in the same spot that you died at.

While Fantastic 4 is supposed to be based upon the recently released movie, it goes further than the movie script by throwing in its own set of villains and areas (probably to make the game would last longer). You will fight anything from street thugs and spiders, to advanced killer robots and mole creatures. 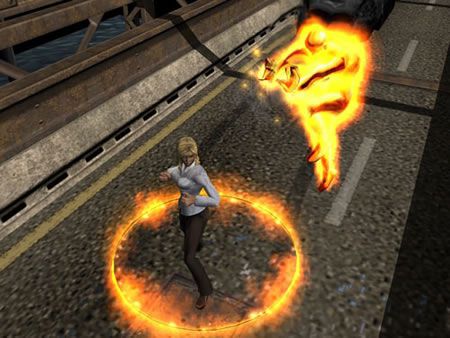 Since the game allows you to play as all four members of the Fantastic 4, there are a vast array of different abilities at your disposal. Throughout most of the game you control just one of the characters through certain levels. However, there are also plenty of parts where they must fight together. This is usually done during the larger battles, but you can actually switch between each character at any given time. So if you want to use the Human Torch's firepower or the Invisible Woman's protective shielding, you can simply switch between the characters. Certain battles will also require you to switch to a specified character in order to perform a special move to help take down the enemy. It really makes it look like they're working as a team, but unfortunately it just feels far too linear.

The control system in Fantastic 4 does take some getting used to. It may be a simple keyboard and mouse control scheme, but there are so many different controls that it can become confusing at first and will take a little while to master. For example, each character has a regular punch, a light attack, and a heavy attack. All of these attacks can then be combined with their special cosmic powers leaving a whole slew of attack possibilities open. There are also a lot of combos that can be performed, but these are generally difficult to perfect. Each character does possess the same controls and moves, however their fighting moves look different in order to stay true to their special abilities.

Another factor which is difficult to control is the camera, which doesn't always go the way you want it to. Also there is an auto aimer that can be toggled at anytime to select which target you wish to attack. This feels a little unnecessary at times due to the fact that they tend to auto aim at their enemies when you are fighting, regardless of what you do. Furthermore, the controls can only be setup outside of the game further promoting the fact that this is a direct console port.

Almost every level tends to feel the same with just a small change of appearance in the environments. Each level feels rather small and limited, and there are plenty of invisible borders throughout to keep you on the linear path. Although you do receive objectives that are pertinent to the storyline, there is really only one objective here: to smash everything in sight. For the most part, all you get to do during a mission is just destroy everything you see. Almost everything is destructible within the environments. So poles and cars can be picked up and hurled at enemies, and plenty of obstacles can be smashed. This is what it's like throughout most of the game, and the story is only slightly separated by some nice-looking cutscenes. 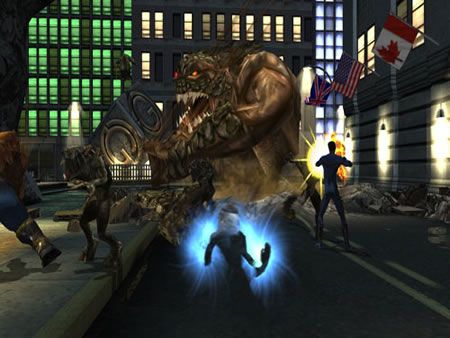 ​
Since there are so many different ways to destroy the bad guys in this title, there is actually a points system in which you earn a specific amount of points after killing an enemy a certain way. Obviously, performing combos will give you more points and these points can then be used to unlock new combos and abilities, as well as classic comic book covers and more.

If working through the seemingly boring storyline just isn't doing it for you, then there is an Arena Fight mode which can be played at anytime. This allows you to practice your skills by selecting a level and choosing which characters and enemies you wish you to fight. There is also another option here that puts you into Survival mode, where you must survive wave after wave of enemies. It's occasionally more fun to just jump into an arena for a few minutes of destruction than it is to run through the main story campaign.

As far as visuals go, there really isn't a lot happening here. For the most part the textures and character skins all look like the console versions. The only exception the PC gets is the obvious ability to support higher resolutions, and the game does support anti-aliasing. Other than that, everything looks plain and actually looks somewhat like Spider-Man: The Movie which Activision published a few years back. 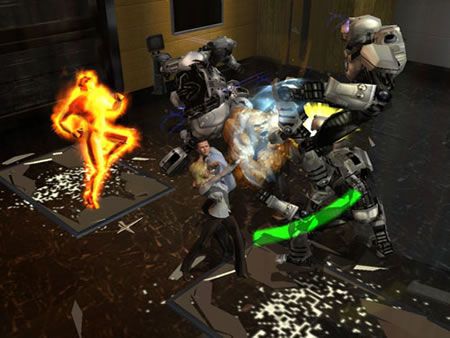 Overall Activision's Fantastic 4 doesn't really offer up anything interesting, and it seems like it was just slapped together really quickly in order to be co-released with the movie. Their powers are pretty fun to use, but it feels too limited and constrained to warrant the type of fun that could have been had. The point and upgrade system is a nice touch, but it's nothing we haven't seen before. There's just no real incentive to go out and buy this game, and chances are that you'll have much more fun going to see the movie. It may not be entirely great, but at least it wasn't as bad as last year's Spider-Man 2.