When the original Empire Earth was launched in 2001 it was a massive historical game, unlike any that had come before it. Its main perk was the ability for you to battle away over thousands of years of world history. It should be no surprise then that Empire Earth II is even larger bursting with a great deal of content and new features that should keep you strategizing for days. It is these new features and content that make this sequel so addictive, and possibly one of the best RTS titles of the year. 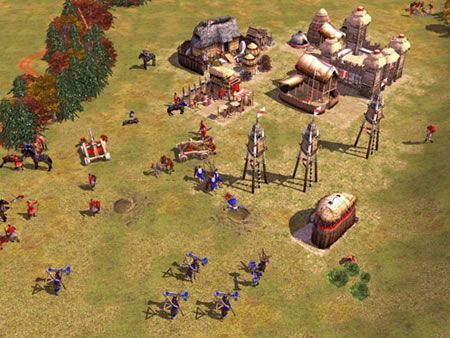 The main portion of the game takes place in the single-player campaign. From here you can play a short tutorial to learn how to use the new features. After all, it does have a high learning curve since the interface and features aren't exactly user-friendly. This is perhaps one of Empire Earth II 's major downsides as it may push casual RTS gamers away. The single-player campaign also features both skirmish and campaign modes. The campaign mode itself allows you to choose from three different campaigns allowing you to oversee the historical events of Korea, Germany, and the U.S. Under each nation's selection is a timeline that shows the most famous wars and events in that nation's history. This is where you get to choose which battles you wish to play, spanning over thousands of years. In the case of Korea, the oldest event that you can start at is in 2333 BC. Completing each event then unlocks the next one in order on the timeline. This is where Empire Earth II truly comes to life, by offering up a large amount of diverse content and changing the gameplay style around a little by putting you in battles that take place thousands of years apart. Although these missions can seem a little mediocore at times, the change of pace is what keeps them flowing. There is also a smaller mode here called "Turning Points" which is designed to represent two of the most memorable battles in history: the invasion of Normandy during World War II and the Battle of the Three Kingdoms in China. Both battles can be played from either opposing sides.

The skirmish mode allows you to play as a large number of civilizations including German, British, Roman, American, Greek, Chinese, Korean, Turkish and more. Once you select your civilization you can then select which team you wish to be on and your team's color as well as the AI's difficulty level. You can then choose which map to play on, change the environmental seasons, how many troops and populations you'll have at start, and even the game speed, resources and game type. 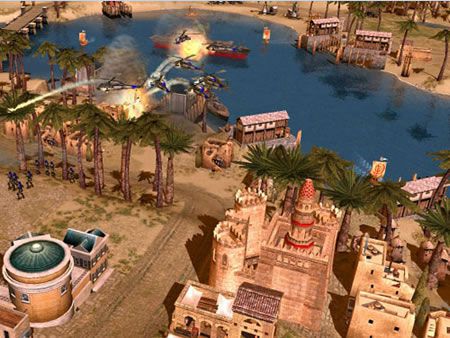 The skirmish mode contains a large number of different game types to choose from. The main game type is the traditional Conquest mode where you just have to simply eliminate all other players. The King of the Hill mode means that you must capture the center territory for the longest amount of time. The Capitols mode forces you to conquer the enemies capitol building while the Territory Control mode allows you to capture a certain percent of the territory on the map in order to win. Other modes include Regicide, Hot Spots, and Crowns. The skirmish gameplay mode may just be the place where you spend the most time in Empire Earth II, since you can create your own battles with plenty of options and variances.

Empire Earth II does also support multiplayer up to 10 players at a time. The multiplayer can be played both over LAN and internet, and it has the same premise as the skirmish mode: You can select the same type of gameplay modes and which civilization you wish to be.

In the traditional RTS fashion, Empire Earth II 's combat takes place on a somewhat medium-sized map. Squadrons of troops, as well as individual troops, can simply be selected and told where to go and who to attack. Also, when selecting a certain squad, a number of different commands show up that can be used. The list includes different formations for battle, ordering troops to explore certain areas, or you can even setup a specified patrol path that they will follow and guard. It's a basic control scheme that's reminiscent of any RTS title. So chances are you can jump right into the action of Empire Earth II, but you might not want to jump in headfirst. The interface design feels a little clumsy and overpopulated with plenty of statistics and new features to boot. It may just be the one factor to force new players to not give this sequel a try. The interface is cluttered with different statistics that show you how many squads you have, what type they are, and how many are in each squad. The more important statistics show you such things as how large your population is and how many resources you've collected such as wood, gold, food, etc. All of which can be harvested by your trusty citizens. 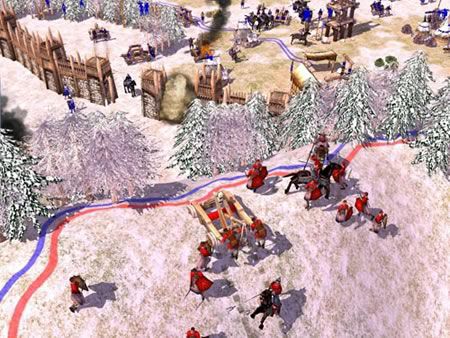 The main point of the combat is to capture the control building in each enemy-occupied area. This building serves as your command center for the area, and it is also where you'll create many useful things for your civilization. One of the main things that can be created here are more citizens. Making more citizens is more important than ever as you need them to collect wood and other natural resources. They are also vital for building and repairing structures. Thankfully there's a new tool that allows you to effectively control all of your citizen's duties, called the Citizen Manager. This feature brings up the full map and pinpoints where each of your citizens are and also locates specific jobs around the map that they could be doing. This allows you to more easily manage what your citizens are doing by simply moving them from one task to another, whether it be mining for gold or building up a new farm.

Another nice feature is the new bookmark view system. There is always a small window located in the lower-right corner of the interface. From here you can set waypoints around the map. You can then select any one of these waypoints from the menu, and in doing so you will then be able to see what's happening at the waypoint in the window. It's a great feature to use if there's a lot of events going on and you just can't constantly scroll across the map to catch it all. Instead, you can simply set a waypoint and check back on it at anytime. 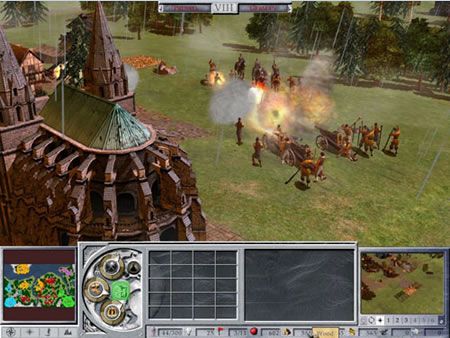 Two other important features that fall into the gameplay is the use of diplomacy and war plans. The diplomacy factor allows you to negotiate with your enemy and simply setup some treaties and tariffs. The war plan feature allows you to look at the entire map and create a general plan of attack against your enemy. This is especially handy if you're going up against some large odds, and you want to plan your course of attack ahead of time. There are plenty of arrows, circles, and 'X's that can be drawn to help visualize your plan of attack.

Another feature of Empire Earth II is the ability to research new technologies. Obviously researching newer technologies will give you a much stronger civilization to conquer others with. There are three different areas that can be researched. These three include military, imperial, and economic. There are always a number of different technologies to research for each category allowing you to build such things as better weaponry and bonuses such as troops not moving slow in bad weather. Each new technology does require a certain amount of resources in order to be researched.

Although the combat in Empire Earth II seems to be the main focal point of the game, we couldn't help but notice the odd proportions of the soldiers. You can argue that this title isn't a realistically accurate depiction of war, but nevertheless the problem is very noticeable. The problem is that the tanks and other vehicles are about the same size as the individual soldiers. The leaders of each army are also about twice the size of any normal soldier. This may make it easier to spot and control certain squad types in the game, but it certainly strips itself of any realism. It really depends on how you look at it, but some may find it difficult to like.

With that fault aside, the combat is usually very fun to watch. It normally consists of many troops on both sides, with the thousands of years of varying gameplay really playing a large role here. Since you can play as different nations during different time periods you'll need to change your strategy each time around. It's the thousands of years of historic gameplay that really adds another level of depth to Empire Earth II and makes it what it is. It also provides for plenty of hours of gameplay and replay value. The combat is also further advanced with some great sound effects that really bring out the detail in the battles. Explosions are replicated by some very nice deep-sounding bass, and every cry and gunshot can be heard accurately. 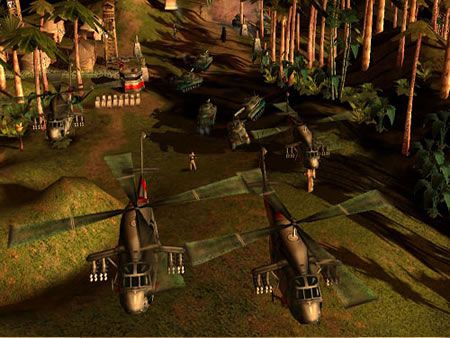 ​
The visuals in Empire Earth II certainly look crisp and solid. The realistic lighting effects add nicely to the overall detail of the game. Also new to the series are the random weather effects. Not only do these look good, but they are realistic in the sense that they can hinder your troops by lowering their visibility, and slowing them down when traversing across the battlefield.

Overall Empire Earth II serves as a very content rich strategy title that should keep you going for quite some time. It has a few faults here or there but mainly makes up for them with its variety allowing you to play thousands of years of historical battles all in one game. Although the problem of the complex interface and huge quantity of features is an unforgettable issue which probably makes Empire Earth II appeal mainly to hardcore RTS fans that have a load of time on their hands to figure everything out. Otherwise it is a feature-rich game that should at least grab your attention and hold you for a while.