This year marks the first time that AMD have delivered a keynote presentation at CES, and it certainly packed a punch. The President and CEO of AMD, Dr Lisa Su, hosted the event in which she laid out the company's plan for 2019. Read on for the highlights.


AMD Radeon VII
The big news of the night was that their latest high-end graphics card, the AMD Radeon VII, will be available on 7th February 2019 for $699 in the USA. The UK pricing and release date is yet to be announced, so watch this space.

So what does the Radeon VII deliver? According to Dr Su, the card features the second generation Vega graphics core, and it is the world's first 7nm gaming GPU. It has 60 compute units running up to 1.8 GHz, 16GB of high-bandwidth memory, and the 7nm technology gives 25% better performance for the same power. When compared with the first generation Vega there are significant improvements in performance; 35% better with Battlefield V (DX12), 25% better with Fortnite (eSports), and 42% better with Strange Brigade (Vulkan) - all of which were tested in 4K at maximum settings, although the full benchmarks were not released. They also showed a comparison with the NVIDIA RTX 2080, in which the Radeon VII generated slightly higher FPS on DX11 and DX12 titles.

Ryzen CPU
The third generation of AMD's Ryzen CPU was previewed for the first time; it is powered by the Zen 2 core and features 7nm technology, and according to Dr Su it will set the bar on performance and power efficiency. In a real-time rendering test, the 8 core 16 thread Ryzen beat the Intel Core i9 9900K by using 30% less power. 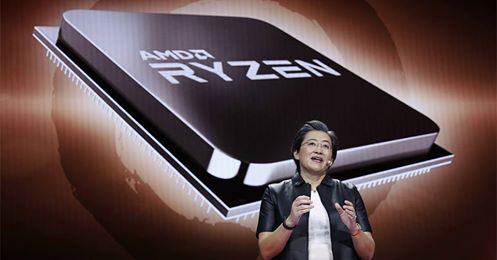 Source: Twitter​
It will be the first PC platform to support ultra-fast PCIe 4.0 connectivity, and it will run on the same AM4 infrastructure as the current generation, making it an easy upgrade if you already have Ryzen. The processor is currently set to launch in mid-2019.

High performance computing
The AMD Epyc datacenter processor has been out for over a year now, and Dr Su showcased the next generation, code-named 'Rome'. The second generation of AMD Epyc will be the world's first 7nm datacenter processor, and it has up to 64 cores and 128 threads per processor whilst using the same socket and platform as current generation. During a demonstration the 7nm AMD Epyc was tested against two Intel Xeon 8180 processors, showing the AMD to be 15% faster. Epyc is currently on track to start shipping in mid-2019.

Project Stream
Dr Su spoke about Project Stream; a joint venture between AMD and Google to "bring game streaming to life". The project launched in October 2018, and Google chose to power the facility with Radeon Pro GPUs (which are based on Vega architecture). It has been tested with Assassin's Creed Odyssey, and all that is needed to play the game at 1080p and 60 fps is a WiFi connection and Google's Chrome browser. However, it is currently only available to people in the USA.

Source: Twitter​
In conversations with the press following AMD's keynote, NVIDIA CEO Jensen Huang described his competitor's announcements as 'underwhelming' and stated that NVIDIA's 2080 card would crush the RVII in benchmarks. Dr Su did not rise to the criticism, instead inviting people to 'wait and see'.