Midway's remake of Area 51 resembles little of the old light gun shooter that you could find in arcades. Instead this new version features an actual storyline, some squad-based combat, and some Hollywood voice talent. Although the last feature depends on whether or not you think the voice actors are Hollywood stars. Marilyn Manson does the voice for an alien named Edgar, and David Duchovny hands over his voice for the role of the main character. If we learned one thing from last year's XIII , it's that there's nothing more boring than listening to David Duchovny's voice acting. Fortunately he doesn't speak too much in here, and Area 51 does manage to have some nice perks to overcome some of the boredom that can be derived from a basic, linear shooter. 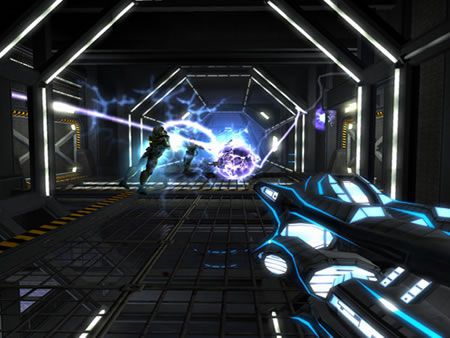 Area 51 starts out with a very nice cinematic video. These videos look great and are fun to watch, but unfortunately there are only about four of them throughout the whole game. The first cinematic shows a scientist within New Mexico's Area 51 named Dr. Cray. He appears to be releasing the monstrous creations within the facility and, as you could imagine, all hell breaks loose. Soon thereafter, a Military Hazardous Materials Team is sent in to determine the cause of the disaster. Once they don't report back, another team is prepped to get ready to be sent down to aid in their rescue. This is where you begin to play the game as Ethan Cole, a trained biologist on Team Bravo. Along with your other three team members, is your mission to go down into the deep laboratories of Area 51 with the intent of rescuing your fellow comrades and perhaps to put an end to this mess.

Right at the beginning you're sent through a quick training routine that's very simple and can be found in most shooters. First of all you get your pistol, and then head over to do a very easy shooting range. Once you're done with that you then get word that there's a rogue soldier running around in the area with the objective of escaping. This leads into more training spots where you're instructed to duck and jump over pipes as you chase down this soldier. Once you finally catch up to him and gun him down, his body mysteriously disappears into a blue-faded light. Everyone's freaked out, but this is just the start of it. Next you head down into a sublevel of the facility to start your mission. On your way down you can clearly see friendly soldiers being killed by other humans who are mutating into strange beasts. 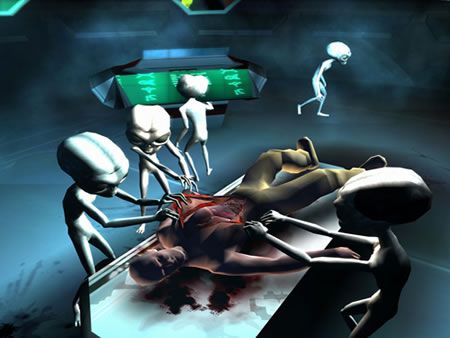 As the story continues in Area 51 , the mysterious Grays have been visiting Earth for thousands of years. The aliens found Earth to be perfect to conduct experiments and research that was too dangerous for their home world. The Grays wanted to develop a super-weapon to use in combat against their unknown enemy. In 1947 a Gray research ship had a major malfunction and crashed near Roswell, New Mexico. Obviously the US government covered the truth, sealed up the site, and recovered an injured Gray named Edgar. A small laboratory was setup on the site known as Area 51 where they studied the strange being. In the meantime a powerful human organization known as the Illuminati had different plans for the facility, with the aim of ruling the world from the shadows. In time a large base was built over the original facility, and the Gray's were given the opportunity to establish a research facility three miles below the surface as long as the Illuminati had access to the alien technology.

For 20 years, Gray and the human researchers worked together to create a creature-weapon code named "Theta" for use in the distant alien conflict. Dr Cray, who was the first to be on the scene at the Roswell incident, has been working with Edgar to create a virus that he believes, when combined with Theta, will be the super-weapon that the Gray's have sought after. The Gray's have a different agenda, however, and plan to use it to destroy Earth. Dr Cray finds out and struggles to stop them from creating the master weapon. In order to accomplish this, he releases his virus through the facility while he safely remains in his lab. The virus spreads quickly turning all individuals into mutated creatures, and then help is called in by the military leaders. This is then where you start the game. The story is really interesting and is the main driving force behind the game. It keeps you entertained the whole way through and offers plenty of twists and turns. 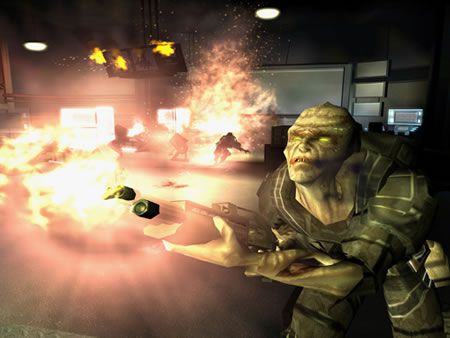 ​
Unfortunately the same can't be said about the gameplay. Area 51 feels too much like a basic run'n'gun shooter. It actually feels like a weaker version of Star Wars Republic Commando, mainly due to the fact that you're a part of a four man team exploring claustrophobic hallways, covering each other's backswhilst you do so. However, in Area 51 you can't give your guys orders: They'll just run around and do as they please. This is not a bad point, since they do usually shoot pretty well and stick together, but normally they'll order you to split off from the main group in order to perform some simple task such as turning the power back on or finding a key card. In this sense it feels very limited and shows itself to be just another linear shooter that only lasts roughly 10 hours.

Despite the game's dark atmosphere it fails to be scary. During the gameplay you sort of get the feeling that it's trying very hard to deliver the same fearsome mentality that DOOM III gives off with creatures popping out of everywhere and dark areas to explore. However, the creatures themselves look more like giant lizards then any type of terrifying beast, and the light textures really take the fear factor away from this game. 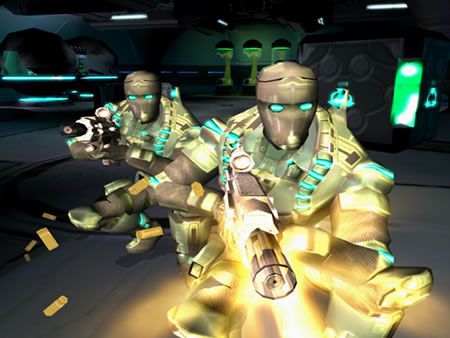 ​
There are at least three things that split up the tedious gameplay and make it seem more interesting. Two of these things can be found with the weapons. Some of the weapons that you can use include traditional pistols, shotguns, assault rifles, and sniper rifles. However, there's another weapon here that shoots out blue energy grenades which bounce off walls and stick to your enemies. Its secondary fire button also activates a laser that, when pointed at a wall or other object, shows you exactly where the grenade will bounce when its fired out. It is also useful for finding the illuminati soldiers that use cloaking devices. Another fun thing about the weapons is that you can dual wield the assault rifles and shotguns Halo 2 style. It's not necessarily a huge part of the game, but it does add some enjoyment to the large and fast-paced firefights.

Another factor that can break up the gameplay is the personal scanner that's built into your wrist band. It can scan sensitive materials and items that are randomly scattered throughout the facility. These items can then be viewed later on from the main menu of the game. Most of these are classified files that give you a little more background on the facility, its scientists, and what's really going on down there.

Later in the game you do actually get infected with the virus that's killing everyone. Instead of turning into one of the creatures you find a short way to treat it, but it doesn't get treated all the way. As a result, you can then transform from a human into a mutant (and vice versa) whenever you want. Transforming into a mutant can be a great way to get the upper hand when in larger battles with enemy soldiers. Doing so allows you to see all the soldiers with a red glow around them and somewhat puts the game into slow-motion. Your melee attack when a mutant is to simply slash your claws, and doing so gives you more mutagen, allowing you to remain a mutant for a longer time. Your other attack also includes shooting parasites which slowly kills off your enemies.

The levels are mostly made up of small corridors within the Area 51 facility. However there are some great looking areas of the facility that house alien technology. For example, there is one area which holds an alien spaceship. The bottom of the ship opens like an elevator, and you can briefly go inside to activate its weapon. The alien technology looks awesome and gives off a Tron-type glow. There is also another area of the facility where you encounter an even larger ship. You can't go inside this one, but there is a cool wavy effect under it to show how it floats. 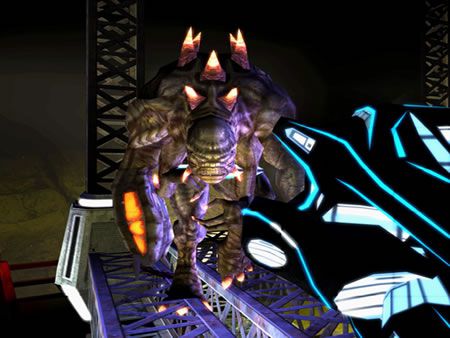 ​
Area 51 also includes a multiplayer mode for up to 15 players. The different game modes include the usual: Team Deathmatch, Deathmatch, Capture the Flag, and a new one specific to this game, called Infection. Infection is strictly a human vs. mutants game, and there are a nice amount of maps to choose from (17) which all scale to the number of players.

Area 51's visuals definitely are not a strong point. While the game does feature some dynamic shadows and ragdoll physics, the textures all seem very flat and low-resolution. Furthermore, the whole game looks too light and not dark enough at all. The AI tends to falls into the same boat. While the enemies will take cover at times, normally they'll stand right out in the open just waiting to be killed.

In the end, Area 51 comes off the assembly line as another basic shooter. It does have a nice story and some key moments that can keep it interesting, but overall it just can't compete in this overcrowded genre. Plus, we did experience a few technical problems in the form of the game completely crashing a number of times. The fact that you can't save whenever you want may also turn most gamers off. If you're desperate to play something new, then Area 51 just might be enough to satisfy you. However if you're looking for something more revolutionary or with a little more depth, then there aren't enough secrets within Area 51 to hold your attention.